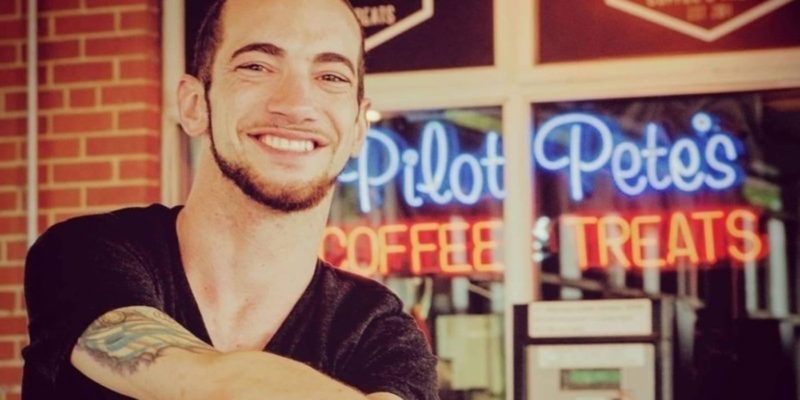 
Tucked away in a suburban Chicago train station it can seem like an unassuming coffee shop. But what goes on behind the scenes is so much more than your average cup of Joe.

For the seventh year in a row, the store’s owner, Pilot Pete, also known as Peter Thomas, has been the driving force behind ‘Coffee With a Purpose,’ an annual community initiative that collects and distributes coats and other necessities to help the Homeless locals brave the harsh Midwestern winters.

Thomas says the idea came to him when he was trying to find a way to give back to the community and to involve others. He admits that he was initially unprepared for the flood of positive responses. In the weeks leading up to Christmas in the campaign’s first year, he and other volunteers received 3,000 coats.

This year, for unit number seven, Thomas and his team ran the Coffee With a Purpose command center from the back of a 26-foot moving truck. The humanitarian caravan made a total of six stops throughout the Chicago metropolitan area.

Pilot Pete’s made 40 gallons of coffee for the occasion. The hot java was supplemented by donations from three other Elmhurst companies eager to do their part.

Baked goods courtesy of Rough Edges Confectionery; the truck and a driver received Good Move Movers, and the truck’s custom signage was the work of the Angel Fancy Design Studio.

At each stop, Thomas invited people to “buy” what they needed, free of charge. In addition to the coats, there was a wide selection of blankets, socks, hats, gloves, scarves, and personal hygiene items to choose from, all collected, sorted, and hung by volunteers from the enthusiastic community.

Thomas notes that with the added impact of COVID, this time there were more people in need than ever. “[When]we made this effort, all the shelters were closed, “he said in an interview with the Elmhurst Independent. “No one was allowed in or out, that is, once you are out, you cannot go back in, so there are more and more homeless people … This is a good year to give more.”

But what Thomas and the community members who work alongside him are trying to accomplish goes beyond just delivering warm clothes and coffee. Forging a human connection with people who are often invisible in society is an integral factor in your giving equation.

Thomas says donating one-to-one makes him feel more genuine. “You never know where someone has been or what they have been through before meeting them,” he told the Independent. “With the homeless, we treat everyone the same or the same.”

According to Thomas’s proud mother, Joni Morgan, her son’s inclusive attitude is simply who he is. “Since he was little, he always found outsiders and lured them in to make them feel welcome,” he said. ABC Local-ish Program.

PLUS: Teen collects 30,000 pairs of shoes to donate ‘Dignity’ to homeless in Los Angeles

Thomas sees coffee as the perfect metaphor to inspire positive action. “I love working with coffee as a motivational tool to push and make people rise beyond their expectations and rise beyond the expectations of society,” he told ABC. “I’m feeding them and taking caffeine to make them do something better … something that will make them feel good about themselves so that we can grow together as a coffee family and soar beyond greatness.”

As of this writing, with plans for a new Elmhurst Metra station in the works, the future of Pilot Pete’s Coffee & Treats is a bit up in the air. Not surprisingly, the community he’s been gathering in for years is now joining him.

“Pilot Pete’s is more than a coffee shop. Peter Thomas gives back to our community in many ways, from the annual coat drive for the homeless, school fundraisers, motivational quotes on the sleeve of each mug, and more, his is the bright face every traveler has. need to see. Their ‘coffee with a purpose’ mentality is part of what makes Elmhurst such a beautiful place, ”says the Change.org petition to keep Pete in his place.

Since a tall, sweet, hot cup of coffee, mixed with a large dollop of the milk of human goodness, is the kind of infusion that is on everyone’s menu, we hope Thomas can continue to serve his special brand of hospitality for children. next years.

(CLOCK the ABC video of this story below).

SHARE the generosity: send this article to your friends …