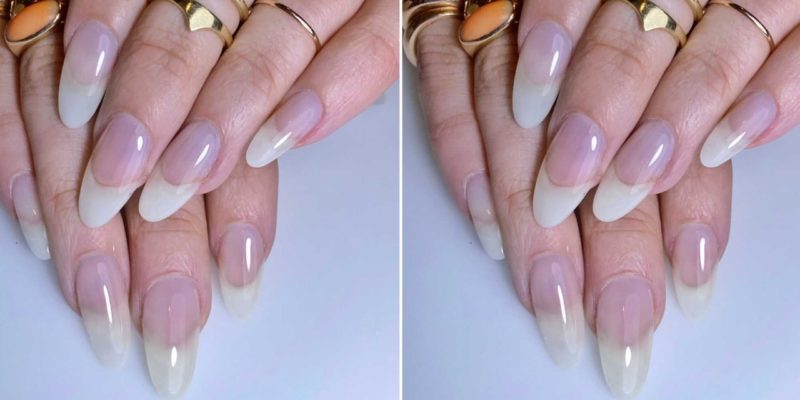 Sometimes, all you want and need in a manicure is buffed and well-shaped nails in their bare state. Other times, you’re in the mood to have long nails — and not all of us were blessed with natural length or strength. For the nail minimalists out there that weren’t, nail artist Fariha Ali (@nailjob) has a solution she’s dubbed “oat milk nails.”

As shown on her Instagram on October 18, oat milk nails look just like real, bare nails — right down the milky, off-white tips — except they’re made from gel extensions. As Ali tells Allure, oat milk nails are an upgraded take on a similar manicure she created for a client a while back. “My client wanted something super natural-looking for her nails while adding some length, so we decided to mimic natural nails with gel instead of doing clear extensions,” she recalls. “I had done a sheer white nail look a couple of years ago that I named almond milk nails and it had been quite a hit, so we decided that this was the 2020 version of those, and hence: oat milk rather than almond milk.”

Ali likens the concept of oat milk nails to no-makeup makeup: they were created simply to enhance what’s already there. Consider them a new alternative to the classic pink and white French manicure. The process of creating the look, as Ali describes, is just as simple as a classic French, if not more so. “The process is quite similar to creating any hard gel set, but instead of creating clear extensions, I tried to mimic her natural free edge color using an off-white hard gel.”

So if you take a photo of these oat milk nails to your go-to nail artist, they should have no trouble recreating the look as long as they have a gel that mimics your natural nail color. The best part? According to Ali, you can paint over these with regular polish and remove it at any time, just like your real nails — plus, “the grow out would be close to invisible.”

In 2020, anything low-effort and low-key is wholly welcomed, so we’ll take bets now on oat milk nails becoming a trend (and a big one).

Now, watch us try every method of nail polish removal:

10 Ways to Be More Positive (Even During Struggles)

Man Donates Entire 25,000 Baseball Card Collection to 9-Year-old Girl Who Lost Hers in a Wildfire