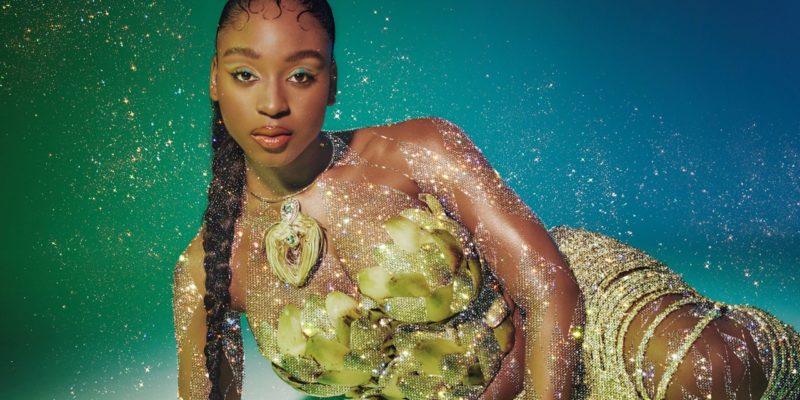 After years of being overlooked and undervalued, Normani is bursting back onto the scene with sizzling new music, a confident new attitude, and the same four-octave range and sick dance moves.

It’s around 10 a.m. in Los Angeles and Normani is still a little groggy. She’s seated on a bedroom floor, wearing an oversize T-shirt, her hair brushed back into a puffy ponytail, and not a drop of makeup. She seems all natural and serene, like the beam of light that seeps in through her curtains.

Normani, who considers herself to be an introvert, comes out of her shell when I ask about the mood behind one of her recent Instagram captions. Accompanying a carousel of photos in which she is working every inch of a tiled set, serving legs and cleavage for your nerves, she wrote, “Woke up this morning and remembered who I was. I’m really that bitch y’all, it’s not for play.”

She’s blushing as I read it out loud because she meant every single word. “There’s a difference between knowing who you are and knowing who you are,” Normani explains. “I know, but I’ve been starting to know.” What she means is, at 25, after too long being told to tone it down, she’s done being held back. No more shrinking. It’s time to shine.

Over the past year and a half, a lot of truths have come to light for Normani. The pandemic mandated a change of pace that gave her the space to breathe and go inward. There had been no time to process the trauma she was left feeling after the Fifth Harmony breakup and the pause let Normani finally put her all into being a solo phenomenon. In 2018, she had released a massive single, “Love Lies” with Khalid, and left mouths gaping while she ate up her live performance of the song at the Billboard Music Awards. Then there was the EP collaboration with Calvin Harris, and successful tracks with 6lack (“Waves”) and Sam Smith (“Dancing With a Stranger”). For 2019’s “Motivation,” Normani opted not to have a featured artist and the single gained even more traction than its predecessors, thanks to the nostalgic, bubblegum-pink music video that zoomed in on her athleticism and dance talents.

Coming out as a new artist for the second time is a challenge, but Normani returned on fire. Now, the star in bloom is in the final stages of producing her debut solo album, reveling in her grown womanhood, and at home with so much more of who she is. “A lot of breakthroughs are happening these days,” she says proudly.

Normani Kordei Hamilton was born in Atlanta in 1996 and raised in New Orleans, an only child. Her mom and dad worked incredibly hard, and for young Normani, witnessing their work ethic was an early foreshadowing of her own grit and ambition. In the midst of traveling frequently for their jobs, her parents balanced long shifts with keeping Normani enrolled in gymnastics, dance, and later, pageants. When they were away, she was raised by her grandmother, who Normani says is the “real star of the family.” It was in her car where Normani would belt out the words to Tina Turner’s “What’s Love Got to Do With It.” She laughs as she remembers her grandmother’s commitment to her own Tina Turner fandom, like the time she went to a Halloween party dressed as the icon — wig and all. Their intergenerational bond is cosmic: “She’s really my best friend. She’s my soul mate, for real,” Normani says of her grandma.

As a young brown-skinned Black girl in the South, affirming spaces were crucial as they weren’t everywhere in Normani’s orbit. “I grew up feeling beautiful. My mom, my dad, my grandmother instilled in me at a very early age that I was beautiful,” she says, smiling. “The fact that my skin was chocolate was a beautiful thing. My kinky hair was beautiful. I don’t need to straighten it. I can rock my braids to my all-white school.”

Normani’s white classmates doled out microaggressions and racist comments about her skin and hair that she knows would’ve been more detrimental without the encouragement she received from her loved ones.

“I did get bullied a lot. Not feeling like I had that representation at school was very hard,” she says. Eventually, after moving to Houston following Hurricane Katrina and switching schools a few more times, Normani and her parents decided when she was in sixth grade that homeschooling was best for her.

“Now you all are going to see me tap into that awareness — that I know I’m the shit.”

The rejection Normani felt from her peers lingers even now that she’s in her mid 20s. She still has to quell thoughts that tell her she doesn’t belong. To stand out, Normani has given her everything to be the best. “I’ve always felt like the underdog in anything that I’ve ever done,” she tells me.

The stakes are high for Black girls from the day we’re born. We aren’t allotted an infinite number of opportunities to show that we’re talented, and that is coupled with the looming expectation that we be so. There is little margin for our trials and errors. For Normani, who is obviously very gifted, her presence was seen as too strong and, in turn, she has often been disregarded. She has touched success, but the recognition can seem like a farce. Impostor syndrome can override everything that is true and prompt the question: Are the wins real and deserved if you’ve had to work harder than everyone else for the recognition?

The answer is not only in her artist’s résumé, but also in the battles she’s won. At this point in her career, Normani has talked about her negative experiences in Fifth Harmony more times than she should have to. While part of one of the biggest girl groups of the 2010s, she navigated racist trolls, a problematic group member, and the recommendation that she repress her star power to blend in.

“I didn’t get to really sing in the group. I felt like I was overlooked,” Normani says. “That idea has been projected on me. Like, this is your place.”

Historically, the term “pop” has come with the notion that the artist and/or product has been carefully packaged. There must be something highly sellable, an element of mass appeal, along with the ability to traverse styles. But the tides continue to turn as Black female artists attain mainstream status with authenticity and experimentation. Normani checks all the boxes, but she also wants to create outside of those lines.

“My purpose in this work that I do is for other people that feel like they have Black women figured out. There’s so many layers to us, there’s so many textures, there’s so much that we’re capable of doing,” Normani says. “Yes, I can throw ass. But I can also give you a proper eight-count, and I can do ballet, and I can do contemporary dance. If I want to sing this pop ballad, then you’re going to love it! While you see my Black face!” Period.

Normani’s grateful for the blueprints of the artists who’ve paved the way, but she’s clear about one thing: Her only formula is her work ethic. Normani puts in the hours of an outlier — studying her craft, getting in after-hours rehearsals — and she doesn’t rest until whatever she’s working on is right. “When I show up, I’m ready,” she says. “You can’t point the finger at me.”

Even then, the final outcome doesn’t always feel good enough to Normani, who is unlearning a lifelong habit of overanalyzing anything she creates. I ask whether she considers herself to be a perfectionist. “Yes,” she admits, without hesitation. “It’s slowed my process down and allowed me to get in my own way.” Now though, as Normani works on her album, she’s seeing the positive outcomes of relinquishing some control.

The next day, Normani is a bit late to our follow-up interview. I wonder if that’s because she stepped out the night before for Doja Cat’s Planet Her album-release party. (Social media timelines circulated a stunning photo of Normani, Saweetie, Chloe Bailey, Ryan Destiny, and Doja posing side by side at the event.) But actually, she was a little late because of a pressing work call.

That call was to discuss the details of Normani’s music video for her first album single, “Wild Side,” featuring Cardi B. It’s a reunion for the two powerhouses, who last linked up on-set for Normani’s dance cameo in Cardi B and Megan Thee Stallion’s video for “WAP.” Normani and Cardi B had wanted to collaborate musically for a while and it was their shared stylist Kollin Carter who connected them to get it done. “She’s a real one,” Normani says of Cardi B, who sprawls out over an X-rated verse on “Wild Side.”

“A lot of people aren’t expecting this [song] and that’s why I wanted to put it out first,” Normani says. It’s a pivot from her previous, more pristine-sounding bops. The track, produced by June Nawakii, unfolds over the throbbing drums from Aaliyah’s hit “One in a Million.” She lights up as she raves about the instrumentation. It’s slinky with dynamic pockets that are perfect for Normani to create another epic dance moment. Her tone is rich, and in the lyrics, cowritten by Starrah, the singer slides around in her sensuality. “I went to [Starrah] and said, ‘I want something really sexy,’” she explains. “I just felt this sense of me coming into my own. I feel like a woman now.”

Normani exudes an intrinsic, red-hot appeal during her performances. But this song is special because it’s just as much for her as it is for anyone else. “That’s the record I need to also feel like a bad bitch,” she says.

Normani amplifies more of that confidence on the rest of the album, not just behind the mic, but in the agency she has over the LP. She herded a team of colossal hitmakers to work on it, including The-Dream, Rodney Jerkins, Priscilla Renea, Victoria Monét, and Tayla Parx. Normani is super hands-on. There really isn’t a part of the process where she’s not involved. She sits alongside producers to help build the tracks, asking questions about intricate details and BPMs. For her music videos, she helps scout locations and sits through the editing phases to look at every piece of footage, down to the coloring and special effects. She says with a laugh, “I’m probably so annoying.”

Normani’s debut arrives at a crucial point in her evolution, one where she sees the rewards of letting down some of her emotional guards. “For me, that takes a lot,” she says. “It’s that end of the spectrum. It’s vulnerability. It’s the things that make me scared. It’s the things that I’m insecure about.”

Instead of lingering behind the walls that she has put up in the past, Normani is stepping out and letting us in. She’s realized her power. “I’m reinventing myself,” she says. “Now you all are finally going to be able to see me tap into that awareness — that I know I’m the shit.”

This story originally appeared in the September 2021 issue of Allure. Learn how to subscribe here.

Michelle Lee’s Final Letter From the Editor at Allure

Ditch Your Hard-to-Grow Lawn And Start Cultivating Moss, Instead