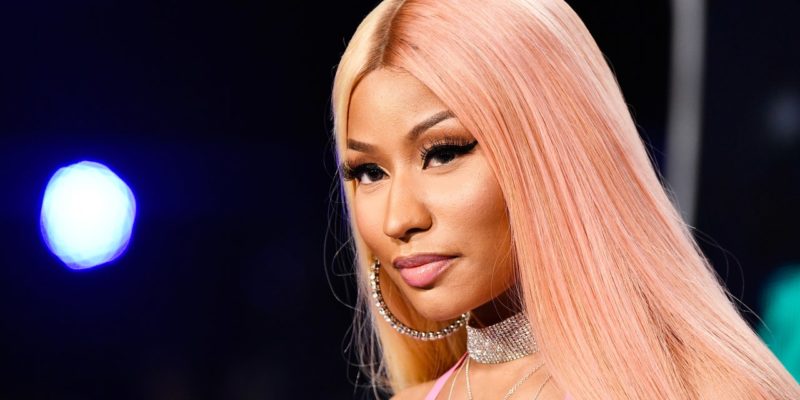 Nicki Minaj has spent most of 2021 minding her business and taking care of her new (adorable) baby. And as a first-time mom in a pandemic, who can blame her? We barely heard a peep from the Queen until May 10 when she shared a photo of herself wearing nothing but a pair of embellished pink Crocs with two pink pillows held against her body. She snapped the pic as a teaser to some upcoming music she had on the way — the re-release of her 2009 mixtape “Beam Me Up Scotty.”

And it looks like she’s not letting that pink Croc off our necks anytime soon. To the delight of the Barbz, she’s been posting more frequently on Instagram, and this time, the Queens rapper is showing fans that she’s not just talented with the pen — she’s also got skills with the makeup brush.

Hairstylist Dionte Gray (known to many as Arrogant Tae) shared a video of Minaj in a jet black wig, giving fans the tea on her beat. As he touches up her edges, Minaj records selfie-style, saying, “When you do your own makeup and you think you cute so you just be shooting selfie videos because you ain’t got nothing to do.”

Her base looks flawless with a capital F. Glowy bronzer and blush are blended seamlessly on her cheeks, adding a nice warmth to her face. She keeps her eye makeup pretty neutral, adding definition with brown shadows in the crease, a thick wing on the lid, and some lengthy lashes. Of course, she couldn’t forget about the pink lip. She painted on a glossy, baby pink hue that’s reminding us of her “Pinkprint” lipstick from her 2017 MAC collaboration.

Though the comments were mostly filled with praise, a few trolls had to interject, saying that she must be a beginner since her liner was uneven. Minaj swiftly cleared the air in the comments: “I actually always do my own eye liner,” she wrote. “So for the ppl saying it’s not even, I’ve done my own liner for the last 10 years chile.” She’s not new to this, sweeties, she is true to this!

In the video, Minaj says that she may begin charging people for her services, leading to laughter from Gray. But Minaj assures everyone that she’s “deadass” before asking, “What should be my rate y’all?” Gray first suggests $1000, which was way too low for the Queen, so he upped it to $5000, a far more suitable price. I mean, she’s Nicki Minaj, Nicki Lewinsky, Nicki the Ninja, Nicki the Boss, Nicki the Harajuku Barbie, and now, Nicki the MUA. You should only pay top dollar to get your face beat by such a legend.

What went right this week: redefining the big five, and more positive news