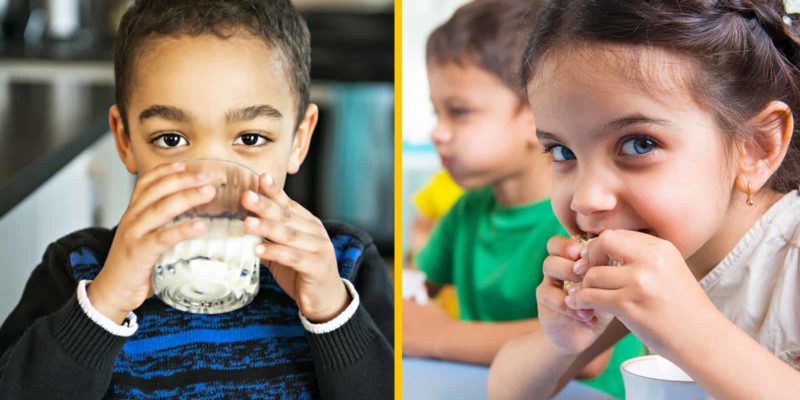 
New research shows that a child’s diet can affect one’s health into adulthood. The UC Riverside study found that eating excess sugar and fat in childhood can permanently change your gut bacteria. The researchers found that this is true even if a person eats healthier later in life. An article summarizing this study in mice was recently published in the Journal of Experimental Biology.

The groundbreaking study revealed that adult mice fed an unhealthy diet when juveniles had a less diverse microbiome. Furthermore, these mice also showed a decrease in the amount of gut bacteria.

“We studied mice, but the effect we observed is equivalent to children having a Western diet, high in fat and sugar, and their gut microbiome still being affected up to six years after puberty,” said UCR evolutionary physiologist Theodore. Garland.

The microbiome consists of the total number of bacteria, fungi, parasites, and viruses that live in and on humans as well as animals. Most of these microorganisms reside in the intestines and help support the immune system. They also help break down food and help synthesize essential vitamins and minerals.

A healthy body is made up of both pathogenic and helpful organisms. However, an unhealthy diet, a lot of stress, a sedentary lifestyle, illness, or the use of antibiotics can upset this balance. Then the body becomes vulnerable to disease because the immune system cannot function properly.

How the study worked

The research team divided the mice into four different groups and observed impacts on their gut bacteria in the study. The four groups included the following:

After three weeks on a specific diet or exercise routine, the mice returned to their usual diet. They also returned to not exercising, as this is standard for laboratory mice. At the 14-week mark, the team looked at the number and diversity of gut bacteria in the mice.

The team found much less bacteria such as intestinal Muribaculum in mice fed a Western diet. This type of bacteria helps with carbohydrate metabolism, which ensures a constant supply of energy to cells. Their analysis revealed that gut bacteria also responded to the amount of exercise the mice got.

Muribaculum bacteria increased in mice that received a healthy diet and had access to driving. However, it decreased in mice on a Western diet, regardless of whether they exercised or not. The team believes that this bacterium and the family of bacteria to which it belongs can affect the energy levels of its host. Researchers continue to study the other functions of these types of bacteria.

Another study found that a species of bacteria very similar to Muribaculum increased in number after five weeks of treadmill training. This implies that exercise alone can affect the amount of intestinal bacteria present.

However, UC Riverside researchers found that infant diet impacted the microbiome far more than early life exercise habits. Garland’s team wants to run an additional experiment, taking samples more frequently during the study period. This will allow them to better understand when the microbiome begins to change and how long these changes last.

The researchers say that no matter when these changes first occurred, the lasting effects on the microbiome were surprising. In the study, they knew that even after 14 weeks, the microbiome of the mice had still not returned to normal.

Garland says the study can be summed up in this: “You are not just what you eat, but what you ate as a child!”

What you eat affects not only your physical health, but also your mental and emotional health. Unfortunately, many children today grow up without vital nutrients due to poverty, parental influence, and other factors. Obesity rates have skyrocketed not only in Westernized countries, but also in developing countries.

According to the Centers for Disease Control and Prevention, Here are statistics on the childhood obesity epidemic in the US. in 2015-16. These are the most current numbers. However, they have likely increased since then.

For children and adolescents from 2 to 19 years:

Obesity levels have increased over the past 40 years due to unhealthy diets and lack of exercise. Infant diet impacts a person for life, and eating nutrient-poor foods puts them at risk for physical and mental illness. Since the gut is home to 70% of our immune system, it makes sense that a more robust microbiome correlates with better health. Another study shows that a children’s diet rich in protein and fiber increases intestinal bacteria and, therefore, immunity.

Most people know that eating processed foods, sugar, and foods high in fat causes health problems. However, scientists have only just begun to understand how diet affects our gut bacteria and our immune systems. Hopefully, this research will encourage parents to feed their children healthy foods to improve their microbiome.

Final thoughts: children’s diet has a significant impact on the health and microbiome of adults

A pioneering study by UC Riverside researchers found that what a child eats affects them for life. It can permanently alter their microbiome, even if they start eating healthier in adulthood. Therefore, it is crucial to feed children plenty of fiber and protein to increase their intestinal bacteria. Sadly, today many children suffer from malnutrition, even as obesity rates skyrocket.

If children learn healthy habits at an early age, they will carry them over into adulthood. Since diet affects the gut more than exercise, parents should emphasize healthy eating at mealtime.

Top Therapist Explains Why You Should Celebrate Your Imperfections