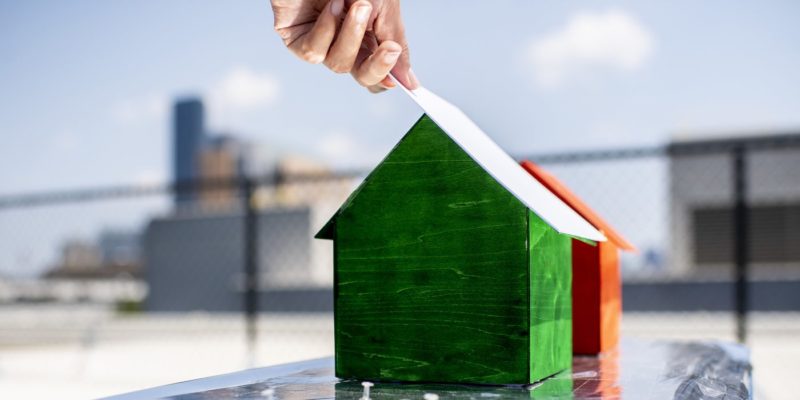 
Turning the air conditioning on to its highest level can provide sweet relief. But your resulting energy bill? Not so much. What if your home could stay cool on its own, without the need for electricity?

That is the premise of Yi Zheng’s new invention. The associate professor of mechanical and industrial engineering at Northeastern University in Boston has created a sustainable material that can be used to make buildings or other objects capable of staying cool without relying on conventional cooling systems.

The light-colored material not only reflects hot solar rays away from the building, but also absorbs heat from inside, the heat emitted by electronics, cooking, and human bodies.

RELATED: How an Indian architect is sucking carbon emissions out of the air and turning them into elegant tiles

In fact, the cooling paper is made of paper, and the porous microstructure of the natural fibers inside absorbs the internal heat and re-emits it away from the building.

Zheng, who studies nanomaterials, got the idea when he looked at a bucket full of used printing paper. You remember thinking to yourself, “How could we just transform that waste material into some functional energy material, composite materials?”

So, with the help of a high-speed blender from his home kitchen, Zheng made a pulp from waste paper, mixed with the material that makes up Teflon. Then he transformed it into a water-repellent “cooling paper” that could line houses. Then he and his team tested its ability to stay cool in various temperature and humidity conditions.

SIGHT: The new design of the solar fireplace not only reduces energy costs by 50%, but can also save lives during a fire

Zheng and his colleagues found that cooling paper can lower a room’s temperature by as much as 10 degrees Fahrenheit (6 C). He selected materials that would reduce the cost of implementing the new technology to cool homes.

Cooling paper is not only environmentally friendly in its ability to reduce your energy footprint. It is also recyclable. The material can be used, exposed to solar radiation, weathering, and varying temperatures, then pulped (again) and reformed without losing any of its cooling properties. Zheng has tested it. And the recycled cooling paper worked just as well as the original.

“I was surprised when I got the same result,” says Zheng. “We thought maybe there would be a 10 percent, a 20 percent loss, but no.”

The process to create and test the new material was described in a document published last month in the American Chemical Society’s Applied Materials & Interfaces journal, and Zheng received a CAREER Award grant from the National Science Foundation for his research.

POPULAR: The new power plant converts waste into energy and functions as a ski slope and climbing wall.

Zheng doesn’t just aim to lower your utility bills through his research. He also hopes his work will help combat climate change.

“The starting point is to reduce the use of carbon-based materials and also reduce global warming,” says Zheng.

(Edited from the article in Northeastern University News)

SHARE this great solution with nerdy scientists on social media …