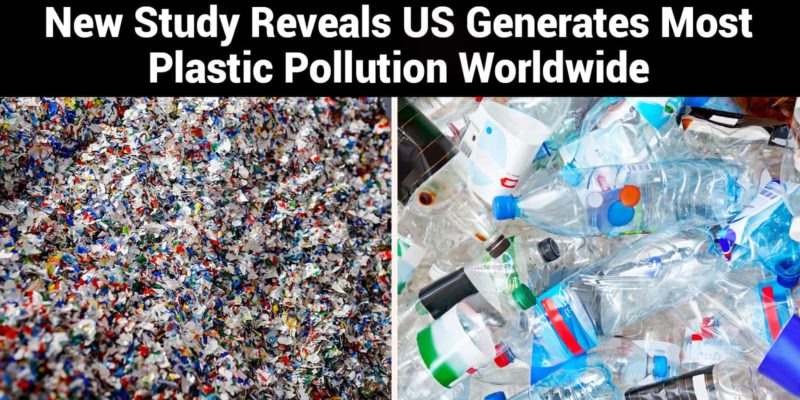 
A new report published in the magazine Scientific advances revealed that the United States produces more plastic waste than any other nation. It also ranks third among countries that cause coastal plastic pollution when exports of plastic scrap plus illegal dumping and garbage are taken into account. This new research contradicts previous assumptions that the US manages and disposes of its plastic waste properly. It also takes the spotlight away from Asian countries, which are often the main culprits for marine litter.

A 2010 study ranked the US 20th among countries that contribute to ocean plastic pollution; however, it did not take into account exports of plastic scrap. Around 5 to 13 million metric tons (Mt) of plastic ended up in the ocean that year. That material came from both developing and high-income countries.

The new study, which was released on October 30, 2020, indicated that the US generated 42 Mt of plastic waste in 2016, more than anywhere in the world. In the United States, we illegally dump between 0.14 and 0.41 Mt of this waste. Countries that imported materials from the US for recycling mismanaged 0.15 to 0.99 Mt. Based on these data, the US contributed five times more to the plastic pollution in 2016 than in 2010. This places the United States among the main countries that pollute plastics worldwide.

According to the most recent 2016 plastic waste generation data, the US shipped more than half of its recycled plastics abroad. This equates to around 1.99 Mt out of 3.91 Mt of plastic collected for recycling sent abroad for processing. Of this, 88% of exports went to countries struggling to recycle plastics properly. 15-25% were labeled low value or contaminated and failed to meet recycling standards.

How researchers use this data

Using these data, the researchers estimated that about 1 Mt of plastic waste from the United States went into the ocean. Scientists from the Marine Education Association, DSM Environmental Services, University of Georgia and the Ocean Conservancy analyzed the data.

“For years, much of the plastic that we have deposited in the blue bin has been exported for recycling to countries struggling to manage their own waste, let alone the large quantities delivered from the United States,” said Dr. Kara Lavender Law . lead author of the study and research professor of oceanography at Sea Education Association.

“And when you take into account the amount of our plastic waste that is not really recyclable because it is low value, contaminated or difficult to process, it is not surprising that a lot of it ends up polluting the environment.”

Using 2016 data, the report also estimated that 2-3% of all plastic waste generated in the US ended up polluting the environment nationally. This equates to between 0.91 and 1.25 Mt. So, along with waste exports, the US contributed about 2.25 Mt of plastic pollution. Of this, up to 1.5 million metric tons of plastics ended up along the coasts. Taking these data into account, the US is among the top three countries for coastal plastic pollution.

“The United States generates the most plastic waste of any other country in the world, but instead of looking the problem in the eye, we have outsourced it to developing countries and have become one of the main contributors to the crisis of the ocean plastics, “said Nick Mallos. Senior Director of the Ocean Conservancy’s Trash Free Seas program and co-author of the study. “The solution has to start at home. We need to create less, eliminating unnecessary single-use plastics; we need to create better, developing new innovative ways to package and deliver products, and where plastics are unavoidable, we need to dramatically improve our recycling rates. “

The study noted that the United States contributed 17% of total plastic waste. That number is despite representing only 4% of the world’s population. On average, Americans generated nearly twice as much plastic waste per capita as residents of Europe.

“Previous research has provided global values ​​for plastic entry into the environment and coastal areas, but detailed analyzes like this are important for individual countries to assess their contributions,” said Dr. Jenna Jambeck, Distinguished Professor at the Faculty. Engineering and co-author of the study. “In the case of the United States, it is vitally important that we examine our own backyard and take responsibility for our global plastic footprint.”

“For some time, it has been cheaper for the United States to ship its recyclables abroad rather than to handle them here at home, but that has come at great cost to our environment,” said Natalie Starr, director of DSM Environmental Services and co-author of the study.

“We need to change the math by investing in recycling technologies and collection programs, as well as accelerating research and development to improve performance and reduce the costs of more sustainable plastics and packaging alternatives to address today’s challenge.”

This year, The Pew Charitable Trusts partnered with environmental consulting firm SYSTEMQ, publishing a report on plastic waste. In the report, they estimated that Plastic pollution in the ocean would triple by 2040 unless all nations take serious action. It will be necessary to reduce plastic consumption and better management of recycling and garbage to combat this problem.

While it may seem overwhelming, we’ve already started taking steps to clean up the environment. In China, for example, the construction of incineration plants caused a 60% decrease in waste generation. In the United States, there are now laws that prohibit the use of plastic bags and straws in several states.

A new study revealed that the US generates more plastic waste than anywhere in the world, despite previous assumptions. Asian nations have borne most of the blame for the problem. But previous data did not include figures on plastic scrap exports. Therefore, the US ranks first in general plastic pollution and third for contributing to coastal plastic waste. However, by reducing consumption and managing our waste more effectively, we can begin to change to improve results.

14 Tips to Decrease your Appetite and Lose Weight