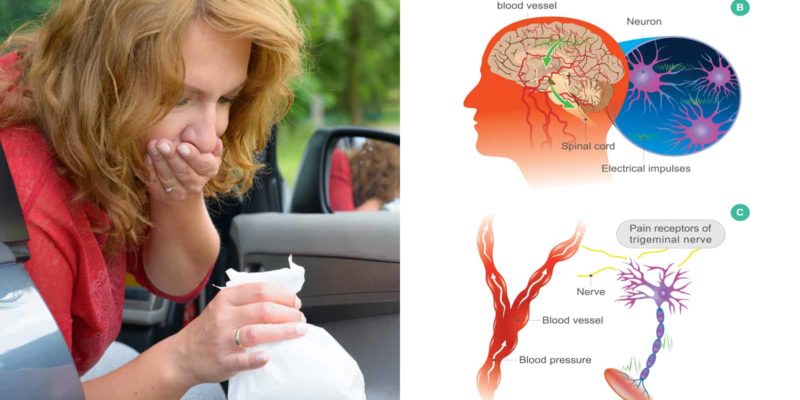 During the virtual roller coaster ride, the researchers also discovered that migraine sufferers had abnormal nerve cell activity in specific regions of the brain. Certain areas had higher nerve cell activity, while others had less activity. Researchers believe that this dysfunctional processing of visual movement stimuli contributes to migraines and susceptibility to motion sickness. The new study was published in Neurology, The American Academy of Neurology Medical Journal, July 7, 2021.

“Millions of people regularly experience painful and debilitating migraines that can reduce their quality of life,” said study author Arne May, MD, Ph.D., of the University of Hamburg in Germany.

“People with migraines often complain of dizziness, poor balance, and misperception of their body’s place in space during migraine headaches. By simulating a virtual roller coaster, our study found that some of these problems are not only magnified in people who experience migraines, but are also associated with changes in various areas of the brain. By identifying and pinpointing these changes, our research could lead to a better understanding of migraine, which, in turn, could lead to the development of better treatments. “

Using functional magnetic resonance imaging (fMRI), the researchers took brain scans while watching videos to experience a virtual roller coaster. No participant reported having a migraine while watching the videos. After the virtual experience, the researchers asked the participants about their levels of dizziness, motion sickness, or other symptoms.

They found that 65% of migraine patients experienced dizziness compared to 30% of the other group. The researchers also gave the study groups a questionnaire on motion sickness, scoring the intensity of symptoms at 1-180.

Those with migraines had an average score of 47 compared to 24 in people without migraines. Migraine patients also experienced unpleasant symptoms for a longer time, averaging 1 minute and 19 seconds. The other group’s symptoms lasted an average of 27 seconds. As expected, the migraine group reported more severe symptoms than the second group.

After analyzing the brain scans, the researchers identified changes in nerve cell activity by looking at blood flow in the brain. Those with migraines were more active in five areas of the brain:

They observed a decrease in brain activity in lobe VIIb of the cerebellum and the middle frontal gyrus. The researchers found that these changes in the brain’s visual processing areas correlated with migraine headaches and motion sickness symptom scores.

“Another area of ​​the brain where we found pronounced nerve cell activity in migraineurs was within the pontine nuclei, which helps regulate movement and other motor activity,” May said. “This increased activity could be related to the abnormal transmission of visual, auditory and sensory information within the brain. Future research should now look at larger groups of people with migraines to see if our findings can be confirmed. “

Clearly, more research is needed to better understand the links between motion sickness and migraines. However, scientists believed they had found the culprit for both conditions.

Next, the researchers tried to induce motion sickness in the participants. They were made to sit in a chair with their heads inside a rotating drum painted in black and white vertical stripes. When the drum turned, it created the illusion of turning. The researchers spun the drum 10 times per minute for 15 minutes or until the subject felt nauseous. Participants rated their nausea, dizzinessand headache on a scale of 1 to 10 before the experiment and every 3 minutes while spinning the drum.

Migraine patients who received a protein drink with tryptophan asked to stop the experiment three minutes earlier than people without migraines who drank this drink. They also had higher rates of nausea, dizziness, and headaches than non-migraine sufferers before and during the experiment. This held true regardless of what drink they drank.

However, the drink without tryptophan caused a similar intensity of dizziness in both groups. This suggests that a lack of serotonin increases the symptoms of motion sickness. Because people with migraines already have lower levels of serotonin, this suggests that reducing them further with the tryptophan-free drink had no effect. Therefore, suppressed serotonin levels can contribute to both dizziness and headaches in migraine sufferers.

A new study from the American Academy of Neurology found that people with migraines report more motion sickness. Abnormal activity of nerve cells in the brain may explain this phenomenon. During a virtual roller coaster, participants increased or decreased activity in five areas of the brain. These regions are responsible for processing visual movement stimuli.

The researchers hope that by identifying these changes in the brain, better treatments will emerge for migraine sufferers in the future. A related study also suggests that low serotonin levels could exacerbate motion sickness in people with migraines.