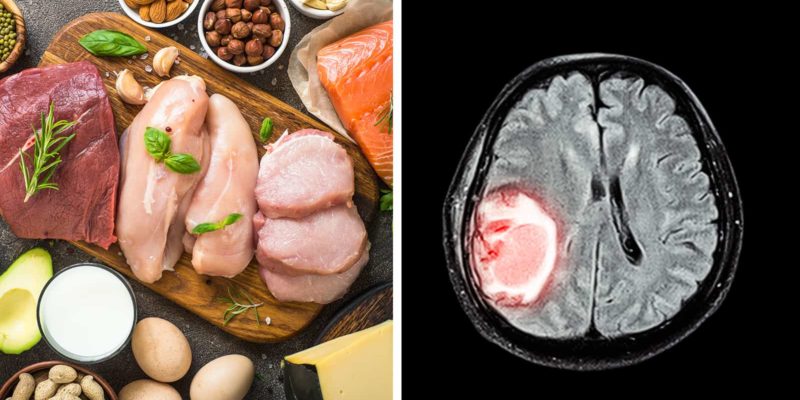 
A new study reveals that people with growing brain tumors can benefit from the ketogenic diet. The ketogenic diet is a modified version of the Atkins diet. Include foods high in fat and low in carbohydrates and moderate amounts of protein. Doctors initially prescribed this type of diet to epilepsy patients in the 1920s. Today, many people follow the ketogenic diet to lose weight, have more energy, and have other benefits.

While the ketogenic diet has exploded in popularity recently, dietary limitations make it difficult to follow long-term. However, the researchers found that a modified version of this diet may benefit people with growing brain tumors. The study appeared in the July 7, 2021, online edition of Neurology®, the medical journal of the American Academy of Neurology.

The small study found that people with brain tumors called astrocytomas could safely eat a ketogenic diet. All study participants had undergone radiation therapy and chemotherapy. The scientists discovered that the diet caused metabolic changes in their bodies and brains. However, it is important to note that the study did not determine whether the ketogenic diet could slow tumor growth or increase longevity.

“There are not many effective treatments for this type of brain tumors, and survival rates are low, so any new developments are very welcome, ”said study author Roy E. Strowd, MD, MS, MEd, of Wake Forest School of Medicine in Winston-Salem, NC, and a member of the American Academy of Neurology.

“These cancer cells depend on glucose or sugar to divide and grow. Since the ketogenic diet is low in sugar, the body changes what it uses for energy; Instead of carbohydrates, use ketones. Normal brain cells can survive on ketones, but the theory is that cancer cells cannot use ketones for energy. “

The researchers recruited 25 people with astrocytomas for the study. Participants followed a ketogenic diet with intermittent fasting for eight weeks. They ate fish, bacon, eggs, butter, heavy cream, and green leafy vegetables. All of these foods are high in fat and relatively low in carbohydrates.

The volunteers met with a dietitian at the beginning of the study and every two weeks thereafter. For five days a week, the participants followed the modified Adkins diet. This involved restricting carbohydrates along with large amounts of fat. The program also asked participants to fast two days a week, eating only 20% or less of their recommended daily calories.

The scientists wanted to see if the participants could stick to the diet without suffering significant side effects. Of the group, 21 people completed the study, with 48% following the diet at a T. However, urine tests revealed that 80% of the volunteers had elevated ketones. This means that your body relied primarily on fat and protein rather than carbohydrates for energy.

Most of the participants with brain tumor growth did well on the ketogenic diet. Only two people experienced significant side effects during the study period. The scientists found that one was not related to diet, while the other could have been related.

The scientists noticed significant metabolic changes in the participants’ bodies and brains near the end of the study. Specifically, hemoglobin A1c levels, insulin levels, and fat body mass decreased. On the other hand, his lean body mass increased.

The scientists also took specialized brain scans of the participants to measure brain metabolites. They discovered increased ketone concentrations and metabolic changes in the growth of brain tumors.

The results are encouraging, but future studies are needed

“Of course, more studies are needed to determine if this diet can prevent the growth of brain tumors and help people live longer, but these results show that the diet can be safe for people with brain tumors and produce successful changes. in brain metabolism. body and brain, ”Strowd said.

Overall, the ketogenic diet shows promise for those with growing brain tumors. While scientists cannot conclusively say that it slows tumor growth or increases survival, it does benefit short-term health. Hopefully, follow-up studies will be done in the future to determine the long-term benefits of the diet on the growth of brain tumors.

The researchers also emphasize that the study participants had a high level of contact with the researchers. They say that in a larger study or in routine doctor visits, this is probably not possible. Therefore, the results of this study may not be replicated in other settings.

Other benefits of the ketogenic diet

Doctors have prescribed the keto diet for decades to treat epilepsy and even mental health conditions. Today, people follow the diet for other reasons, such as the following:

A small study revealed that the ketogenic diet could help patients with brain tumors. The study found that patients had more ketones and an improved metabolism after eight weeks. They also had more lean body mass and lower levels of insulin. However, they are still not sure how diet might affect brain tumors in the long term. More studies are needed to determine these effects, but the results of this study are really promising.