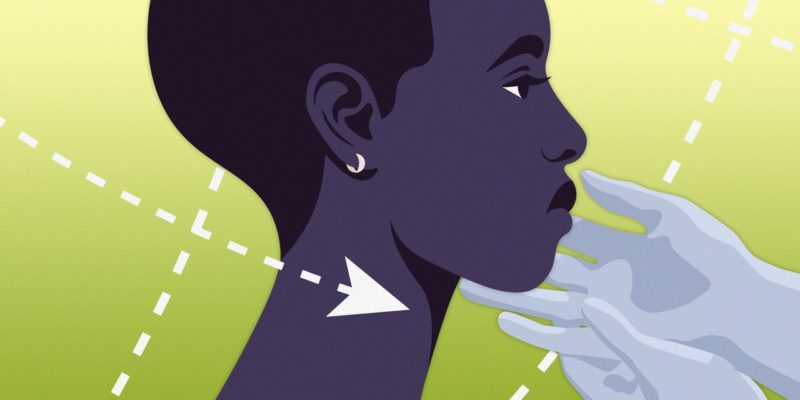 This surgery is routinely done under local anesthesia with IV sedation, and comes with a week or two of recovery time. (Some surgeons place temporary drains in the neck to prevent fluid from collecting, especially in deeper zones that have been cleared of fat.) While some patients opt to skip the sedation, be aware, it does more than merely enhance comfort: According to Levine, it allows doctors to keep your blood pressure low, which minimizes post-op bruising and swelling.

Loose neck skin can sometimes magnify other issues, like muscle laxity and stubborn fat under the chin. While it’s true that older patients are typically those who are looking to fix sagging skin, Doft notes that weight fluctuations — at any age — can also cause this particular issue.

A complete or traditional neck lift, which can cost upwards of $35,000-plus, sometimes creates larger scars than the previously described procedures. To fix neck bands, surgeons will still use that direct gateway under the chin. But to address jowls, remove extra skin, and resuspend a drooping platysma, they need to make incisions around the ears. The precise length and position of these incisions — in front of the ear, behind it, or both — depends on the amount of work required. Generally speaking, says Levine, an incision behind the ear alone will not be enough to address jowls, however by adding a limited incision in front of the ear, surgeons can correct early or significant jowling while also raising the platysma and trimming away excess skin.

According to Devgan, the looseness of the skin largely determines a patient’s candidacy for this procedure: “I begin to think about a surgical neck lift when I see more than one centimeter of pinchable laxity at the jowl or in the tissue of the neck — at that point, there’s really not nonsurgical or minimally invasive way to get rid of it,” she says.

(On semantics: Some doctors refer to this procedure as a classic face lift or a lower face lift, since opening around the ears gives them access to muscles of the face, too. But in most cases, the auricular scars for this type of neck lift are less extensive than what’s needed to fully address the mid and lower face plus neck.)

Performed under general anesthesia or local with sedation, a comprehensive neck lift with both ear and chin incisions may demand a longer healing period (everyone recovers on their own timetable, but figure up to three weeks). Sutures — for all neck surgeries — typically come out around the one-week mark. At that point, patients should look and feel well enough for regular daily activities (though there may still be some residual bruising). Levine has many patients who get back to life within a week of surgery, he says, and if they’re asked about their bruises or swelling, “they’ll just say, ‘Yeah, I hated my neck, so I did something about it.’ And, to me, that’s super-empowering.”

Lizzo Is Bringing Back the French Pedicure