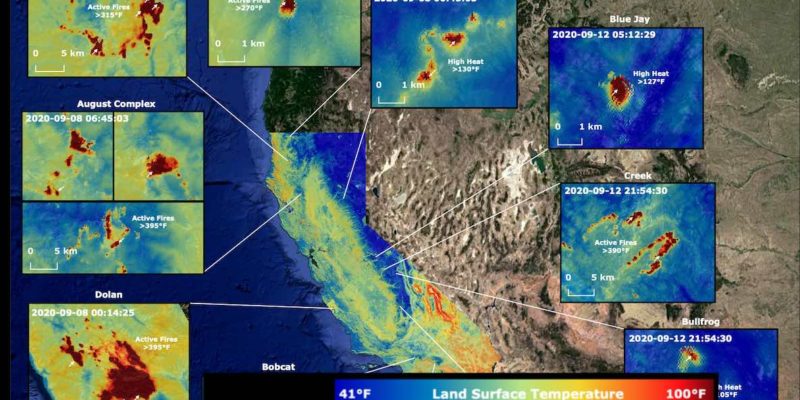 
A NASA instrument on the International Space Station is uniquely positioned to provide firefighters with valuable information on the progression of wildfires and hot spots over time.

Heatmap data produced by ECOSTRESS has helped front-line responders contain approximately 53% of the pirate fire in southern Oregon, which two weeks ago was the largest wildfire in the US.

ECOSTRESA –ECOsystem space thermal radiometer experiment on space station– measures surface temperature from the point of view of space, with the ability to observe fires at high spatial resolution (around 70 meters), making it ideal for tracking fires.

Researchers from the RADR-Fire team at the Pacific Northwest National Laboratory have been experimenting with the ECOSTRESS data as part of a new tool that is now being rolled out to first responders like the US Forest Service.

In one case, ECOSTRESS was tracking the movement of the Bootleg Fire and identifying its proximity to critical infrastructure. The areas in red represent the hottest pixels that ECOSTRESS can detect. Extreme heat in red areas indicates the fire front, or where resources are most needed.

ECOSTRESS capabilities are unique. Most satellites do not have a high enough resolution to track the thin line of the fire front, but when they achieve a higher resolution than ECOSTRESS, they require 5 to 16 days to return to the same area again, while the station space crosses overhead. twice in a day.

RELATED: Teen invents a smart fire extinguisher to save his home while he’s away

ECOSTRESS also captured data on the Dixie Fire in Northern California, which had doubled in size to more than 220,000 acres in just a few days.

More than 7,000 people at the end of July were involved in the wildfire response to the two fires. Although they have a variety of tools at their disposal, the use of high resolution spatial data such as that provided by ECOSTRESS serves as a good example of the versatility and impact that satellite data can provide in the real world.

SHARE Wildfire innovation with your Western friends on social media …

On the Road with Thomas Merton