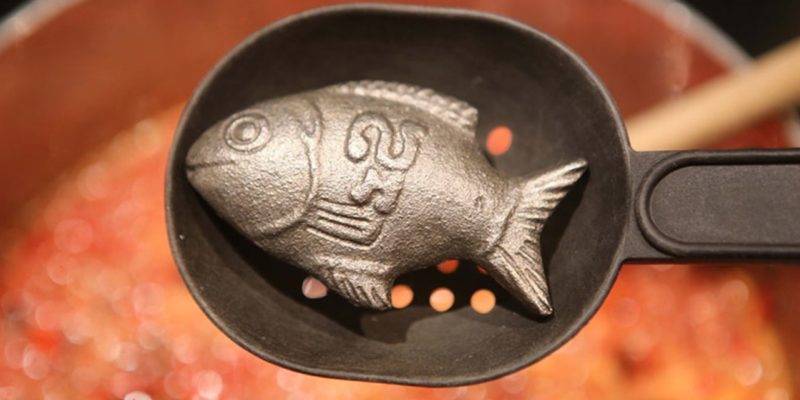 
Has anyone ever told you that you have an iron deficiency? It is quite likely, given that this is the most common and widespread nutritional disorder in the world.

Two graduates of the Canadian medical school have created a simple and delicious solution to “tackle” the problem in the developing and developed world, which they have called Lucky Iron Fish.

Basically nothing more than a specially designed iron ingot in marine form, the Lucky Iron Fish filters out a significant portion of the recommended daily amount of iron for an adult when boiled for 10 minutes.

The iron supply in Lucky Iron Fish lasts for five years and quite ingeniously users will know when it’s time to get a new one as the fish’s smile will slowly wear out. When the fish is no longer happy, it is time to buy a new one.

The idea for the fish shape grew out of Dr. Gavin Armstrong’s work abroad, where he learned first-hand about the effects of iron deficiency in adults and children.

In Cambodia, the fish is a symbol of luck, and in an attempt to convince people to put a large piece of dirty iron in their soup pots, he adopted the fish’s iconography to appeal to his culture. It worked. And where it didn’t work, that is, in India where vegetarianism is rampant, Armstrong simply changed the shape and created the Lucky Iron Leaf.

PLUS: These are the 3 most promising longevity supplements from scientific research so far

Armstrong, a graduate student at the University of Guelph, came up with the idea in December 2012. Iron deficiency is a tangible economic and public health impediment, with a measurable loss of GDP stemming from the easily preventable problem. The success of your product has been enormous, with a report from AIM2Flourish citing a million sales in 2016 alone, and a Oprah Winfrey endorsement.

At $ 50 per fish, it’s one-thirtieth the cost of a five-year supply of iron supplements, and it’s certainly more fun for kids. It is also backed by numerous clinical trials proving its effectiveness. You can buy one for the family here on amazon.

Tell your vegan friends all about this invention on social media!

Newsy News How: How to Win in 2021 and Not Suck at Business