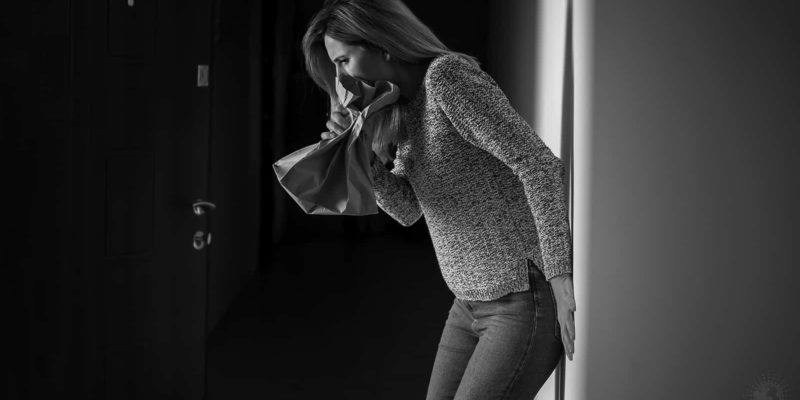 Your heart is racing, you are sweating, and you feel like you are having a heart attack. You are sure this is the end, as the feeling of impending death is making you dizzy. You struggle to catch your breath and feel like something is sitting on your chest. Are you having a heart attack or are you panicking?

It’s really hard to tell if your body is responding to extreme anxiety or if you are in cardiac arrest. According to the University of Michigan Medical Bulletin, Heart health, a heart attack has pain that radiates from the chest to other areas. On the contrary, panic produces shooting pains in one place. Also, panic pain only lasts for a few seconds, while cardiac arrest brings unrelenting discomfort.

Still, if this is your first anxiety attack, it’s hard to distinguish between the two. Fortunately, emergency rooms can quickly tell the difference by performing a blood test and EKG. What you do during a panic attack can mean everything. You can make things worse or learn to control symptoms and ease the situation quickly.

According to medical expert Micah Abraham de The Calma Clinic, it takes about thirty minutes for a person to fully recover from a panic attack. However, the actual attack may only last a few minutes. It takes time for the body to return to normal, which mainly involves the rebalancing of hormones such as cortisol and adrenaline.

The wide variety of symptoms during panic attacks

Although a panic attack can last only a few minutes, these moments can be torture. Since everyone is different, the symptoms you experience can vary greatly. Also, each anxiety attack can be very different. You may experience chest pain, shortness of breath, and dizziness once, but the next episode can bring sweating, nausea, tremors, and fear of death.

The best way to combat these attacks is to try to determine the cause of them. Anxiety almost always has an underlying cause, unless you have a condition that is like generalized anxiety disorder. Some people experience attacks on a daily basis, which paralyzes them, while others have only an occasional burst of anxiety.

What triggers a panic attack?

Finding the source of your panic is not always easy. Something that is known to cause them includes:

Some people may panic after the death of a loved one, but others have faced it since childhood. In some cases, the key problem can be discovered and you can work on a solution. If your anxiety accompanies physical pain, then managing the pain can also help ease panic.

What SHOULD you do during a panic attack?

Your response to increased anxiety is everything. Most people don’t know what to do during a panic attack, making things worse. Here are the key things to do during anxiety to help symptoms ease faster.

The hallmark of anxiety is negativity, so you must combat it with positivity. For example, you feel awful and like you are dying, so you need to remind yourself that this too will pass. Try saying things like:

The more positive things you talk to yourself, the more you reduce the situation. Positive self-talk is one of the keys to overcoming a panic spell.

2. Get Out and Get Fresh Air During a Panic Attack

Nature heals and calms the mind, body and soul. Many people lose ground when panic shakes them to the core. So getting outside and getting some fresh air can help tremendously.

Many people also experience trouble breathing and claustrophobia kind of feelings during anxiety, so being outdoors tends to alleviate these feelings. Grounding yourself can also help stop an attack. Take off your shoes and feel the dirt between your toes.

The vibrations of the core of the Universe can be very calming for someone who feels unbalanced.

One of the fastest ways to control panic is to use breathing techniques. Box breathing allows you to focus on and control pain and discomfort. Also, many people experience a lack of oxygen during this attack, hence the reason why so many breathe into a brown paper bag when they hyperventilate.

Use rhythmic or box breathing, Do the following:

As you box breathe, you will instantly feel a sense of calm engulf you. Now keep in mind that it is a challenge to sit and breathe when you feel like your whole world is spinning out of control, but you have to.

4. Use grounding tricks during a panic attack

Dialect behavior therapy is widely used to help treat many mental health disorders. One of the critical components is learning to re-center or ground yourself. During a panic attack, you need to remember a few things to ease the pain, so try looking for things like:

For example, if you are in the grocery store when an attack occurs, you can see the display shelves, customers, and workers. You can also smell things like cakes baked at the deli, and you may be able to taste a metallic taste in your mouth. The key is to take your mind off your discomfort and focus on other things, and this trick works well.

5. Get away from the situation

Circumstances cause many panic attacks. For example, if you and your spouse are arguing, it can increase your anxiety. One of the simplest things you can do during a panic attack is to simply walk away from the situation.

It can calm down fairly quickly when stimuli are removed. However, it may take a few minutes for you to regain full control of yourself.

Three Mistakes To Always Avoid During A Panic Attack

Now that you know what to do when anxiety is high, you also need to know what not to do during a panic attack.

One of the worst things you can do is scold yourself for feeling this way. You need to acknowledge the feelings you are having and work to refocus.

2. Don’t try to escape during a panic attack

Have you ever heard of the term fight or flight? Many people want to run when they feel this impending doom. The theory is that if they continue, they can avoid fainting or dying.

Unfortunately running won’t help you. Did you know that some people park their cars and go out and run or leave their shopping carts at the store? The key is to find a place to sit until the attack passes.

If you play on the fear that you are dying or that this is the end, you will only make things worse. When your mind tells you that you are dying, you must remind yourself that it will pass quickly. Keep fighting all the irrational thoughts to overcome this anxiety.

After you have experienced a few attacks, you will know how horrible these situations can be. Unfortunately, many people begin to avoid the places that trigger their panic. For example, if you have an anxiety attack at the grocery store, your mind might equate the grocery store as a trigger.

So naturally, you should avoid the grocery store to avoid another panic attack. Soon, you will find yourself unable to go to a grocery store due to the uncomfortable feelings it brings. Agoraphobia is a prevalent mental health problem in society. According to The Cleveland Clinic, about one or two percent of the population suffers from this phobia. Fortunately, it is one of the most treatable with help.

Final thoughts on what to do during a panic attack

Dealing with panic is never easy and can paralyze you if you allow it. However, there are things you can do during a panic attack that can help you land and return you to a calm state. The worst thing you can do is play on your fears and make things worse.

Remember, anxiety is the great suitor. This elevated state of the body will make you think, feel and believe things that are not true. It will help if you learn effective ways to defuse the situation to calm yourself down.

The next time you feel an attack coming, sit down, start box breathing, and remember that this will pass too.

22 Habits To Help Ease Your Mind and Eliminate Worry