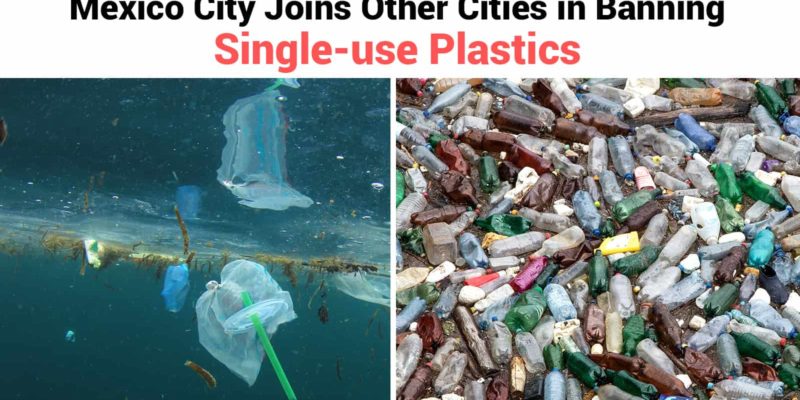 Mexico City recently enacted a ban on single-use plastics, joining dozens of other cities around the world. This expands the restriction on plastic bags, which the city banned last January. The broad ban on plastics includes items like straws, forks, containers, and balloons. After more than a year of preparation, the ban went into effect on January 1, 2021.

That day, the Secretary of the Environment of Mexico City tweeted that “as of today, Mexico City [is] no single-use plastics. “The message encouraged people to always bring reusable shopping containers or other store-bought items. Mexico City lawmakers first approved a ban on plastic bags, utensils and other single-use items in 2019. In the past year, companies and suppliers have been adjusting to new laws and researching plastic alternatives.

At street vendor stalls, lightweight, biodegradable plastic bags have become more common. Plastic straws have been gradually disappearing from the corners. Additionally, shoppers have been seen using their clothing or plastic wrap to wrap fresh tortillas. However, without the law being enforced with fines, some suppliers still choose to use plastic.

On New Year’s Day, a tamale vendor used a plastic bag to wrap the food and offered customers plastic spoons. He said he knew about the ban. But with the pandemic, the authorities have not enforced it. However, the woman said that other providers had also not complied with the ban. They have still been trying to figure out how to serve customers without resorting to plastic.

Hopefully, as time goes on, the government will help provide companies with suitable alternatives to adhere to the ban. According to the city’s environmental agency, Mexico City produced around 13,000 tons of trash per day in 2019. Given that statistic, the ban seems quite necessary to stifle the use of plastic throughout the city.

Mexico City is not the only city that bans plastic.

China also recently banned plastic straws and single-use bags. Other disposable plastic bans will follow as the country integrates biodegradable alternatives. Last March, the European Union banned single-use plastics in 28 countries and the laws went into effect this year. Many other tourist destinations throughout Mexico have also seen new rules passed regarding plastics. According to the environmental organization Greenpeace Mexico, five municipalities and 22 states in Mexico have enacted plastics bans since 2017.

The state of Quintana Roo in Mexico also banned plastic bags, utensils and other disposable plastics from the following 12 months. These laws will apply first to the islands of Holbox, Cozumel, and Isla Mujeres. They will then be applied throughout the rest of the state, including Cancun, Tulum and Playa del Carmen. Of course, most laws will be implemented in stages to start introducing alternatives gradually.

Mexican beach destinations have also begun to impose bans, stretching from the Caribbean coast to the northwest of the peninsula. Baja California Sur passed a law in July 2018 that prohibits plastic bagsStyrofoam cups, straws and containers. The ban will go into effect in the state starting this year.

In the US, some places have banned plastic straws, such as the following:

In 2019, San Francisco also banned the sale of plastic bottles. It became the first city in the United States to ban plastic bags in 2007. Hawaii and New York also have plastic bag bans. Delaware, Maine, and Rhode Island have state “label, recycle, or reuse” programs.

How plastic harms wildlife, humans, and the environment

All over the world, cities and countries have started saying no to plastic. The world seems to be heading in the right direction as more governments show concern for the environment. Because plastic doesn’t break down, it creates hazards to wildlife and humans alike. Unfortunately, scientists estimate that humans swallow a credit card worth plastic per week.

Studies show that plastics expose the human body to numerous dangerous chemicals. One of the most harmful is bisphenol A (BPA), a chemical used in plastic bottles and containers. A Canadian research team found BPA in urine by 95% of the adults evaluated. Di (2-ethylhexyl) phthalate (DEHP), which is used to increase the flexibility of plastic, is another dangerous chemical found in plastic. Long-term exposure to these two chemicals can lead to these health problems:

As for the environment, a study by ecologists at the University of Toronto found that waterways have been affected by plastic pollution. The study published in September 2020 reveals this about the scale of the plastic problem in our environment:

“Cleanup alone would require at least one billion people to participate in the Ocean Conservancy’s annual International Coastal Cleanup. This would be a Herculean task given that it is 660 times the cleaning effort of 2019 ”. ~ Stephanie Borrelle, University of Toronto

Some statistics about the plastic pollution problem

Along with many other cities globally, Mexico City enacted a ban on single-use plastics, including plastic bags. Other cities in Mexico have followed suit since 2017. Hopefully, one day we can have a world without plastic so that all life on Earth can thrive.

Is It Persuasion or Manipulation? Watch for These 12 Red Flags