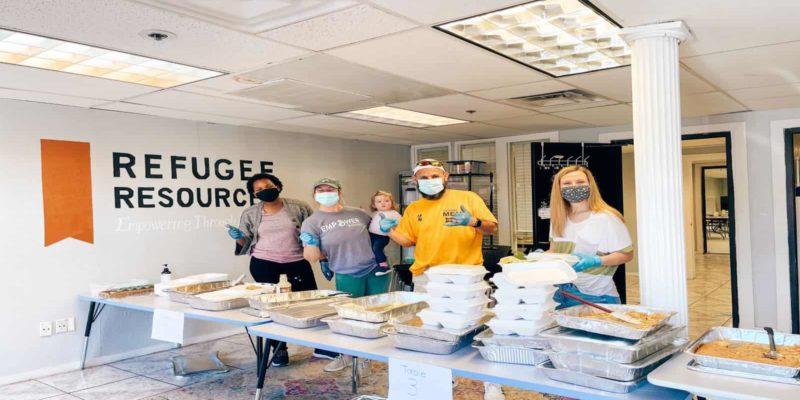 
Mercy Chefs, a Virginia-based nonprofit, headed to Texas to serve hot meals amid bitter temperatures. The storm left many Texans trapped in their homes without electricity or water. What started out as an inconvenience quickly turned into a deadly situation. Many had to weather the storm in freezing temperatures, without food for days.

Mercy Chefs serves hot meals to citizens across the country who have recently faced disasters. Before reaching Dallas, Texas, provided disaster relief in Alabama after a devastating tornado hit the Birmingham suburbs. In the past, they have also helped communities recover after hurricanes, floods, and other natural disasters.

Who is behind Mercy Chefs?

The nonprofit organization began in 2006 when founder Gary LeBlanc witnessed the destruction following Hurricane Katrina. He said that while volunteering in New Orleans, he noticed the intense and widespread devastation throughout the city. Storm he had left the city in ruins and Gary felt compelled to help in some way. He knew that hot meals could make a big difference, but was “outraged by the quality of the food served.”

However, after working in the hotel industry for 35 years, he had a lot of experience serving food. He combined his experience with a strong desire to help people, and Mercy Chefs came to life. To date, they have served more than 10 million meals, reaching the milestone earlier this month. The chefs now have three mobile kitchens and two refrigerated trailers.

The team serves restaurant-quality food cooked by chefs to citizens and first responders after natural disasters. So far, they have responded to 134 disasters in 27 states and 10 countries. Since the pandemic began last March, Mercy Chefs has prepared more than 7 million meals.

After the winter storm devastated Texas, they didn’t think twice about helping out.

On its website, the organization said: “This is a natural disaster as severe as any hurricane, tornado or wildfire. In some ways, a weather event like this is even more destructive, leaving millions without electricity, water, food, and other vital resources for an extended period of time and causing widespread damage to homes, businesses, and community infrastructure. Approximately 10 million Americans in Texas alone are suffering, and even dying, from the cold. “

“When our friends at Gateway Church called for our help, we immediately said ‘yes.’ They asked for all the support we could muster because conditions are so desperate in Texas. Mercy Chefs is on the way with delicious hot meals to fuel the body and soul. We bring everything we can to bless the people of Texas. We will be serving our first meals on Friday (2/19). “

They began serving hot meals from a large mobile kitchen at Gateway Church North Fort Worth Campus last week. The team served lunch and dinner to the community, distributing food from various locations. Mercy Chefs used several kitchens to prepare meals for distribution to citizens. They have also been working to provide clean drinking water to those in need throughout Texas.

“While our USDA Farmers to Families grocery box distributions and community cooking programs continue across the country to provide relief from winter storms across the country, we are now transporting our commercial grade resources, including generators. of industrial power and water filtration systems, to serve the residents of the Dallas / Fort Worth area as they recover from this terrible winter storm. “

Gary says they have never seen such a need for hot meals and disaster relief before, not even after Hurricane Katrina. Last Wednesday, Mercy Chefs had received 20 requests for assistance from Dallas to Oklahoma. They have continued to receive requests throughout the week and will respond to as many as they can.

Mercy Chefs served more than 40,000 meals after the winter storm

According to his Facebook page, the volunteers served the last of his chef-prepared meals on February 24th. With the help of 700 new volunteers, the team prepared more than 40,000 meals for Texans in need. As the state’s water and power came back on, citizens felt a sense of normalcy return. However, before Mercy Chefs left, they made sure to stock their warehouses with essentials for those still struggling.

They also bought grocery boxes for distribution by church partners across the state. The team saw volunteers of all ages coming to help, from children to seniors.

Here are some poignant posts on their Facebook about the lives they have touched during the crisis:

Without the kindness and love of organizations like Mercy Chefs, millions of people would have been left without food. The team of chefs risked their own lives traveling on icy roads to help those in need. Throughout the week, they served thousands of people across the state.

However, without your support, they could not continue to serve. If you want to donate to your organization, You can do it here.