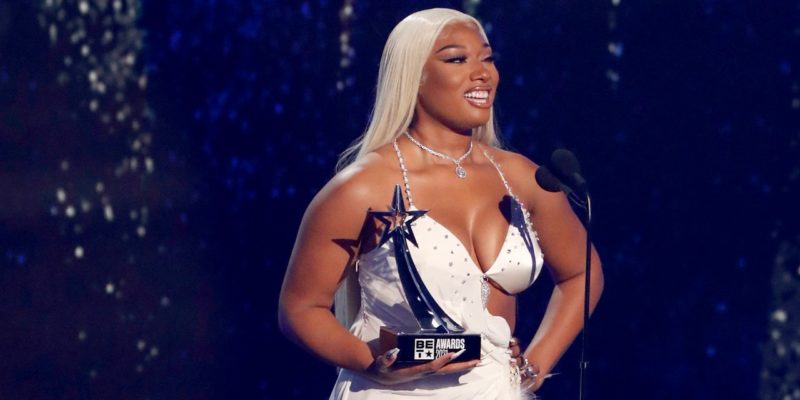 Considering how much she loves to switch up her hairstyle and color, we’re guessing Megan Thee Stallion probably has a pretty impressive wig closet. And considering how many awards she’s won in the past year, she may want to build herself an trophy closet, too — especially considering how many she’s taking home at the 2021 BET Awards. Oh, and did we mention she was wearing yet another stunning wig?

Although Meg showed up on the BET Awards red carpet wearing super-long, super-sleek, middle-parted, black hair, it seemed as though she’d gotten the world’s fastest bleach job by the time she performed “Thot Shit.” Styled very similarly, her hair was suddenly platinum blonde, whipping around gorgeously as she had her hands on her knees, shakin’ ass.

Shortly after the performance, she kept the straight, extra-long blonde look to accept the award for Video of the Year on behalf of herself and Cardi B — who just revealed she’s pregnant with her second child — for “WAP.” But that was only one of the awards she (and her wondrous blonde wig) won. She also took home the prize for Best Female Hip Hop Artist.

And while she hasn’t won every award for which she was nominated, she has made it perfectly clear, as she has with the other awards she’s been winning, that she’s a force to be reckoned with, regardless of hair color.

Megan The Stallion wasn’t the only superstar to bring a blonde look to the BET Awards. Ciara debuted a stunning blonde bob that immediately earned a spot in our bring-to-the-salon photo album on our phones, right next to Meg.