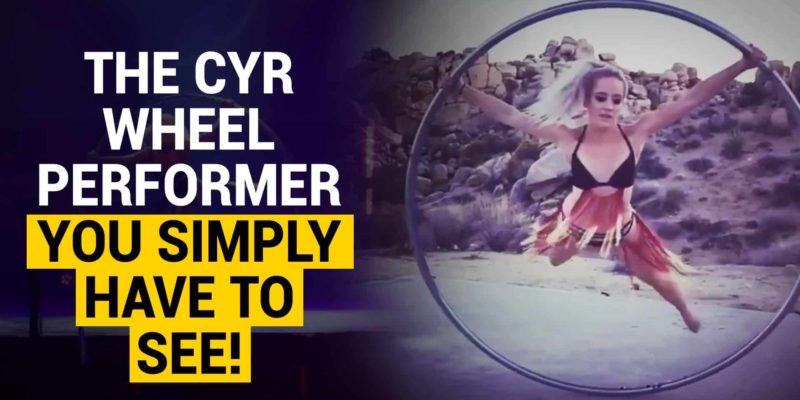 
If you’ve ever been to a circus, you’ve probably seen a Cyr Wheel performer. The Cyr wheel is an aerobatic apparatus consisting of a large aluminum or steel ring. The wheel is about 10-15 cm higher than the performer. It first appeared in performances in the late 20th century, but was not officially named until 1998.

The Cyr Wheel, or roue Cyr in French, takes its name from its founder, Daniel Cyr. The canadian circus The performer unveiled his invention for the first time in 2003 at the Festival Mondial du Cirque de Demain (“World Circus Festival of Tomorrow”) in Paris. Cyr ended up winning a silver medal for his dazzling routine with the homemade Cyr wheel.

Cyr created his first wheel from a rough piece of steel. Later, he started using aluminum to make the wheel lighter, adding a layer of PVC to smooth it out. Finally, he created a more portable five-piece design that could be disassembled and reassembled with screws.

Today, thousands of acrobats and circus performers use the wheel for their routines. From the gigantic stages of Las Vegas to the streets of London, spectators never tire of the Cyr Wheel performances. They make it look easy, but it takes a lot of skill and precision to master this sport.

While the idea for the Cyr wheel didn’t take off until recently. However, almost a century has passed. Historians believe that American dancer Doris Humphrey was the first modern performer to incorporate a monowheel into her act. Photographs taken at one of her shows in 1923 capture her performing with a device very similar to the Cyr wheel.

Germany mass-produced the closest precursor to the Cyr wheel, the Einreifen, in the early 1950s. Cyr first experimented with wheel designs in the 1990s. He claimed it was inspired by a large hula-hoop and a round wrought iron coat rack.

How does the Cyr wheel work?

If you’ve never seen a Cyr Wheel performance, it usually begins with the performer spinning the heavy wheel on its rim. Once the wheel begins to swing, the acrobat moves in and out of it in a hypnotic and timely dance. Then the interpreter gets on the wheel, grasping it with both hands and feet.

As the wheel continues to gain momentum, the user performs spins, reversals, somersaults, and pirouettes while keeping the wheel and himself in perfect balance. Of course, it takes hundreds or thousands of hours of practice to control the wheel and be comfortable with complex movements. However, if you want to give the Cyr wheel a try, you can start with these basic moves:

Keep one foot on the wheel. Then use the other foot to push like you’re on a skateboard. Then put your “push foot” back on the wheel and keep turning.

Use your arms to start spinning the wheel. Then stand on it once it starts to spin.

With your arms at the 9 and 12 o’clock positions, begin turning the wheel. Next, roll your torso to keep the wheel at your side, then roll it in front of you, stepping on the wheel in one graceful motion.

You can also find many free sources, such as YouTube channels, for tutorials and tips.

Meet the queen of the wheel Cyr

One woman had humble beginnings with the Cyr Wheel and is now performing around the world. Meet Tosca, the undisputed queen of the Cyr Wheel.

“When I started, Cyr Wheel was something that I practiced on my own in the gym at night, and I never thought it could bring so much change in my life,” Tosca said. “I travel a lot, I get to work with my friends, I never expected it to just come out of what I thought was a sport and a way of being in shape at the beginning.”

He grew up playing soccer and gymnastics, which has given him a solid foundation for the Cyr wheel. Since performing with the apparatus requires grace and stamina, your experience gives you an advantage. While physically demanding, it is also an art form that allows artists to show their creative side.

“I am originally from Prague, I moved to Los Angeles 10 years ago and have performed for a long time. I still do, but now I also produce full concept programs, which has been nice, ”said Tosca. “Since I went from doing Cyr Wheel as a simple sport to combining it with a more performative element of Burlesque, I have always been inspired by Dita Von Teese, the undisputed queen of Burlesque. It has been amazing working with her, and I hope the tour we were supposed to do this year can take place in Europe next year. “

Tosca says he works long hours, but he really enjoys all the challenges that come along the way. Find happiness in your career as a Cyr Wheel performer. In addition, she is motivated to continue creating exciting shows for her audience. Whether she’s training, putting on a show, or talking to friends about her ideas, Tosca always finds something to keep her busy.

It’s amazing to see a Cyr Wheel artist using just their bodies and an aluminum wheel to create mind-blowing visual art. Tosca has come a long way in the sport, and we are excited to see where he takes her next!

Are you interested in trying the Cyr wheel or seeing a live show? Without a doubt, it is a fascinating sport. Humans never stop inspiring, especially when it comes to acrobatics or performances that test the limits of the mind and body. It takes monumental control and precision to master the Cyr Wheel, along with years of practice.

Tosca deserves all the successes it enjoys today. Hopefully, you will be able to see her perform live one day!

Have you ever seen a Cyr Wheel performance in person or tried it yourself? Let us know in the comments!

Everything You Need to Know About Getting Gel Extensions

Breathing With This Device for 5 Minutes May Lower Blood Pressure as Much as Exercise or Drugs: Study