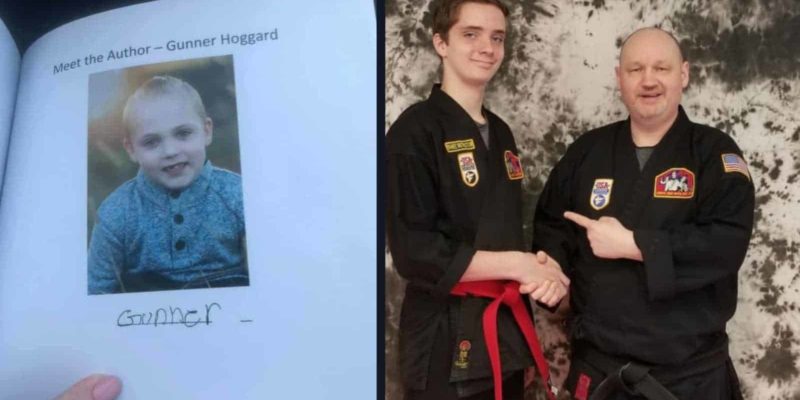 
Every day you hear about people who make a difference in the world around them. In today’s broken world, these people inspire us and remind us that a lot of good things are still happening. Meet ten amazing people who overcame impossible obstacles in their own life. And in turn, each one helped other people in a time of great need.

You will enjoy these moving stories that do not accept the meaning of the word impossible.

When three Georgia prisoners saw a much-loved deputy sheriff pass out, they went into action. They began yelling his name and banging on doors to wake him up after he fell and fractured his skull. The whole unit came together, chanting his name and banging on his doors. With blood pooling around his head, the noise woke the sheriff long enough for him to press the unlock button. Then he passed out again.

When the doors were flung open, the three inmates ran to where the officer landed and called for help. They applied first aid to the deputy until help arrived. Later, when he was recovering at home, the officer admitted that he did not know that he had fallen and hit his head, but heard screams and thought that a prisoner needed help. The entire sheriff’s department is grateful for these three men who chose to show kindness to another human being.

2 – the wisdom of Grandma Jean

When the pandemic forced universities to switch to online learning, a student was tasked with meeting someone new on campus. Since social distancing made this nearly impossible, she joined various groups in hopes of completing the task. When she got an answer from an older woman called Grandma jean I was surprised but intrigued that someone so old was using social media, much less a college student.

At 87, Grandma Jean assured her that she was a college student. Jean was in her third year of school, fulfilling her dream of a college education. Grandma Jean became a close friend of the young student, sharing her wise wisdom and optimistic outlook on life. She was able to find a silver lining in every situation, maintaining her faith and gratitude as the pandemic dragged on for days, weeks, and months. The young student says that Grandma Jean taught her to never stop learning, to keep playing no matter how old you are. Jean emphasized the importance of being a happy person and learning to laugh even on difficult days.

The young student says the most important thing she learned from Grandma Jean was that there is a difference between getting old and growing up.

Aging involves your physical body. But getting old is looking for opportunities to improve your life and the lives of others. It is waking up with a positive mindset. Grandma Jean says never give up your dreams no matter how old you are and most of all live your life without regrets.

3 – Seven-year-old raises money for an excellent cause

When you ask a seven year old Gunner Hoggard what he wants to do in life, he will tell you that he wants to continue writing books. And he plans to use the money from the book to help fight Perthes disease, a rare childhood disease that affects the ability to walk. His other goal is to encourage other children like him not to be alone.

This outgoing young man knows the difficulty of the disease, but does not stop it. She says her goal is “to help other kids like me who can’t do ‘normal’ kid things.” Despite her own grief from Perthes disease and the many other challenges she faces, she maintains a positive attitude.

Your book, “My adventure with Perthes, ”Tell the story of how you find the strength to endure the pain and other challenges of having an illness. He is also donating a dollar from each book sale for Perthes disease research. Gunner’s mother says it best: “His ability to turn a life-changing situation into something positive makes me more proud of him.”

Owner Mario Salerno He knew that many people who lived in his eighty apartments had lost their jobs or were in financial difficulties due to the pandemic. He wanted to make sure his tenants could buy food, so he gave up the month’s rent in hopes of giving them a little break. Described by many as extremely caring, Salerno says he’s not as concerned about money as he is about the safety and health of his tenants.

One tenant says she was worried about paying the rent as her hair salon had to close, but when she noticed her rent was canceled for a month, she called Salerno a wonderful man. Hopefully your example of kindness during difficult times will inspire others to do the same.

Sensi Del Rounds I loved teaching karate to children. So when his martial arts center had to close due to Covid, he felt sad for the children he knew who were looking forward to the lessons. He also knew that karate could alleviate the anxiety that many children felt about all the changes that were happening around them. I wanted to do something to help the children. Therefore, he decided to teach a free karate class online for anyone who wanted to learn.

His first online class had 200 kids eager to learn karate. Rounds said that learning karate helps children learn to focus and concentrate in a challenging situation. His students become stronger and able to face difficulties with courage. Her positivity and desire to help children in the midst of the pandemic is an inspiration to all of us.

When she contracted Covid and had to be hospitalized, 90 years Suzanne Hoylaerts He declined a respirator and told his doctors, “Save it for younger patients. I already had a good life. “Sadly, she died two days after arriving at the hospital. Hoylaerts’ simple decision not to carry a ventilator for the sake of the younger ones in the hospital with her reminds us that acts of kindness have no limits. old.

When CEO Kent taylor decides to do something, follows it. As Covid hit small businesses in the United States, some of the hardest hit were restaurants and bars. His own restaurant chain, Texas Roadhouse, was hit, so he decided, instead of laying off his front-line employees, he would pay them out of his own base salary and bonus for the year.

8 – The plumber refuses the payment

Plumber James Anderson he has a habit of not charging his customers, but that’s no surprise. It has been doing it for years. He heard that a 91-year-old woman dying of leukemia needed to have her boiler repaired. So he immediately went home and repaired the broken boiler. The woman’s daughter expressed dismay at the bill: Anderson did not charge her. His daughter posted the bill with all zeros on Facebook. The next day it went viral, obtaining more than 30,000 reactions and 11.00 reruns.

Anderson started his nonprofit company, DEPHER, Emergency Plumbing and Heating Repairs for the Disabled and the Elderly, three years ago. As of today, he arranged 2 389 people for free plumbing or heating. It is their way of giving back after having once observed a worker taking advantage of an older man. This experience revealed how important it is to help and protect older adults. Anderson sums it up well by saying the following:

“It made me think of the elderly and vulnerable: we have to do something more to help people who need it most.”

These people he pointed out often suffer in silence, suffering from high prices. Her goal for DEPHER is to help cancer patients, seniors, by offering free and low-cost services.

Anderson’s big heart comes at a price. His non-profit business is currently in debt. But he says cancer patients and the elderly are worth helping out. His gang lends him the money he needs to buy supplies and continue his mission to help. The kindness and generosity of one man touched the lives of many people.

Lori Wood, An ICU nurse, she was assigned to Jonathan Pinkard when he was admitted to the hospital after falling from work. Pinkard was shocked to discover that he would die if he did not receive a heart transplant. Wood heard that Pinkard was homeless, which meant he was ineligible for a transplant. Therefore, Wood decided to become his legal guardian to help speed up the possibility of him getting on a transplant list. Pinkard had been living in a men’s shelter where he worked as a clerk.

“I had to help him. It was a no-brainer. I would have died without a transplant. “

Do you remember when you were in school and you were drawing on all your papers while listening to your teacher? Nine years Joe whale he loved to doodle. He often got in trouble for drawing in his class, but his parents encouraged his budding talent.

They sent him to drawing classes after school, where his teachers marveled at his talent. His artistic abilities became so well known that “Number 4”, a popular restaurant in Shrewsbury, England, asked him to draw on its walls. Whale, nicknamed the Doodle Boy, has a website and shows his work on social media. If the restaurant hadn’t given Whale a chance, his incredible talent wouldn’t have been shared with the world.

This boy shows the world that determination helps a person achieve their goals. He strives to be an inspiration to others.

Final thoughts on people who overcome impossible odds to help others

Impossible situations often provide great opportunities for people to show kindness and generosity. Who knows, maybe today you can help solve someone’s problem and be a great blessing to them.