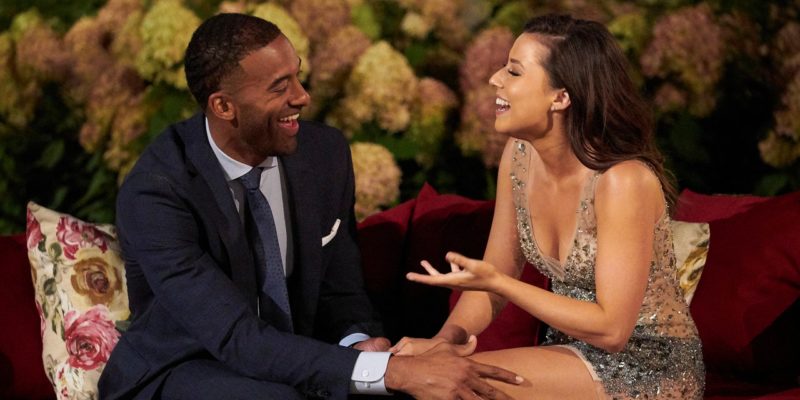 Look, I know that ABC’s The Bachelor franchise is not the place anyone should go to observe socially responsible behavior — this is the program that forces people to compete for a marriage with a person they barely know, after all. But I watch it every week regardless, often finishing an episode feeling enthralled by the drama yet guilty for watching people embarrass themselves during sometimes-degrading date challenges like dramatic public readings of erotic fiction, fake Sports Illustrated photo shoots, and bikini tractor races (yes, all of those things have actually happened on this show). But on February 8, a date activity left me feeling ickier than ever and I need to have a conversation about it.

Long story short: Bachelor Matt James took contestant Katie Thurston on a one-on-one date that involved heading to a spa, where James planned an elaborate “prank” for them to pull together on his best friend Tyler Cameron, another The Bachelor alum. While Cameron received a massage, James and Thurston fed his masseuse instructions through an earpiece in attempts to “ruin” his relaxation. During this time, they ask the masseuse to do stuff that ranges from somewhat harmless (like stopping the massage to answer her phone) all the way to downright inappropriate (stroking and pinching his nipples without asking). Near the end of the massage, Thurston and James sneak into the massage room, trying to contain their giggles. Cameron is lying face-down at this point, so James takes it upon himself to start massaging his friend’s back until he notices. I’ll leave the entire clip below for you to watch for yourself.

Once Cameron figures out what’s going on, it’s all laughs and hugs for the camera — but I can’t help thinking how violated and infuriated I’d feel if this prank was attempted on me. Or the heightened amount of backlash the show would likely be facing had they pulled this prank on a woman. I’ll tell you why: save for consenting sex and romance, there are few experiences more intimate than getting a full-body massage, especially for folks who are not used to or don’t normally enjoy being touched.

More often than not, you are fully naked under that sheet during a massage. You have to put a whole lot of trust in a masseuse to touch your body in a way that is consensual and appropriate — and many people have experienced sexual violation during a massage because their masseuse took advantage of that. (If you go to a new masseuse and they don’t ask what your boundaries are in this regard, definitely reconsider their services.) Not to mention that when getting a massage, you are only consenting to one person touching you in this way — no matter how close you are with your best friend, it’s not OK for them to touch you intimately and without your knowledge in a setting where you don’t even know they are present.