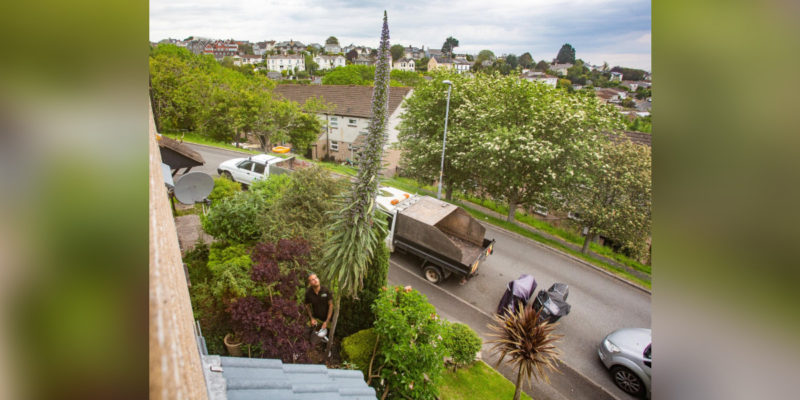 
A man has grown Britain’s largest echium plant after saving it from a dumpster.

Tree surgeon Darren Wilson brought the plant home three years ago after seeing that it had been scrapped at a job he was working on.

He put it away and planted it in front of his house, and now it has become the tallest in Britain, at 18 feet, it is even taller than his house.

Echium plants are generally biennial, which means that they generally flower in their second year.

However, Darren’s echium plant has bloomed in its third year, which means it had one more year of growth before blooming.

The 39-year-old from Saltash, Cornwall, believes that a combination of good sunlight and a winter fleece during the cold months has helped him grow.

He said that after he and his wife measured the huge plant, they decided to do some research online and try to figure out how tall the biggest one was.

Their research revealed that the tallest known echium in the UK was 16 feet tall, two whole feet shorter than Darren’s.

“We measured it on Sunday and it had already grown seven centimeters compared to Friday. It should stop growing once it has finished blooming. All the flowers will turn into seeds and everything will die … But I think he still has another month of growth left. “

CHECK: This green-toed gardener has grown something amazing: a sunflower with 27 heads

Darren stumbled upon the echium, which was much smaller at the time, in a cleaning job he was doing. Since then, he has been protecting the magnificent plant and wrapping it in winter.

As for what the neighbors think of the tree-like plant?

Darren says, “One guy actually said he’s pretty sure he runs down the street at night when we’re all in bed.

“When you go up the road, it’s right there in your eye line, so it stands out, it looks good, very impressive.” We could never deny that.

These Homegrown Mushroom Hives Could Save Ireland’s Bees

8 in 10 Youth Think Gardening is Cool, and Half Would Rather Visit a Garden Center Than a Nightclub