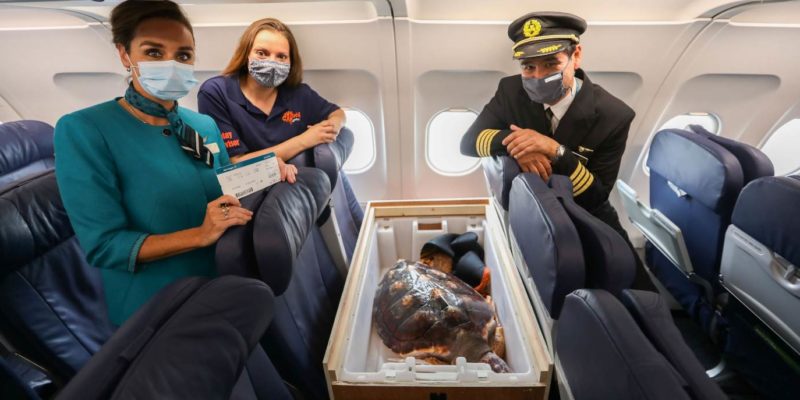 
An endangered turtle that appeared in Ireland with hypothermia was returned to its native Canary Islands on a flight and even had its own boarding pass.

The three-year-old loggerhead turtle, known as Julius Caesar or ‘JC’, was discovered on the beach in County Donegal, but has boarded a flight to much warmer waters.

The airline Aer Lingus partnered with Exploris Aquarium, where the reptile has been living for the past three years, to bring it to Gran Canaria for release.

Aer Lingus pilot Captain Peter Lumsden said: “It is our pleasure to welcome a very special passenger on board today and to ensure the safe transport of JC the Turtle to Gran Canaria.

“Since they were first contacted, Aer Lingus has worked closely with the Exploris Aquarium team and our maintenance and engineering and ground operations teams to ensure all of JC’s needs are met as we complete this important mission.

Keeping the tortoise’s temperature above 19 degrees is critical to its well-being and requires regular monitoring and lubrication of the shell, so placing it in the hold of the plane was not an option.

Its specially designed box was securely attached to various seats in the cabin.

PLUS: The last known Swinhoe tortoise on Earth was alone until this female was found – researchers hope to have babies

In January 2019, weighing in at a few hundred grams, nine-month-old JC is believed to have got caught in the wrong current and swept up the Gulf Stream.

Loggerhead turtles are in danger of extinction and are happiest in hot climates, which is why the cold waters of the North Atlantic endanger JC’s life.

Fortunately, he was discovered by a local family and taken to the Exploris Aquarium in Portaferry, County Down, to recover in a tropical tank with tasty fish and squid mix sandwiches.

The pandemic prevented its repatriation for three years, however, on September 15, the now 25 kg reptile was packed in a waterproof box and boarded flight EI 782 from Dublin to Gran Canaria.

He was accompanied by his caretaker Portia Sampson, who ensured that he was safely transferred to the Wildlife Recovery Center in Tarifa upon arrival.

Less than 24 hours later, JC fully acclimated to his new home and was returned to the sea.

Aer Lingus previously transported another rebellious loggerhead turtle, Leona, to Las Palmas, Gran Canaria in December 2014 after it was discovered in County Clare.

Loggerhead turtles are a vulnerable and endangered species and their numbers are declining in the wild.

According to the World Wide Fund for Nature (WWF), they are “the living representatives of a group of reptiles that has existed on Earth and has traveled our seas for the last 100 million years.”