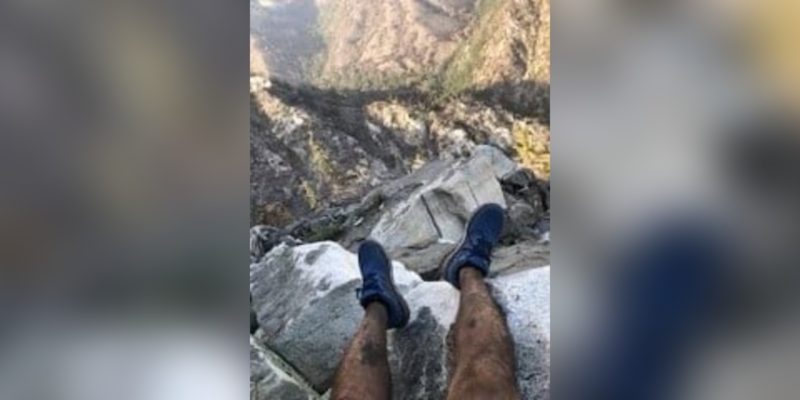 
Benjamin Kuo likes to look at photos and find out precisely where they have been taken. He happily admits that being a satellite mapping enthusiast is a “very strange hobby. But recently, his quirky interest may have saved the life of a California man.

Rene Compean was walking alone in the Angeles National Forest when he realized that he no longer knew where he was.

According to the Los Angeles County Sheriff’s Department, the 45-year-old sent a text message with a photo of his legs dangling over the edge of a canyon to a friend. In the message, he said that he was missing and that his phone’s battery was getting low.

The police department released the image to the public, hoping someone would recognize the landscape and know where Compean was.

Are you an avid hiker in Mt. Waterman area? #THE D SAR teams need help locating a #missing walker. He sent this photo to a friend. His car was found near Buckhorn Campground / Trailhead. Call us if you recognize the area shown below 818-248-3464. https://t.co/Xi0VL6Mxfi pic.twitter.com/1lUMrgj4y9

Fortunately, Kuo saw the report. And he had a hunch: to notify the police with what he thought were the correct GPS coordinates for Kuo’s location.

MORE: Hero Trucker ignores his own safety to save utility worker stuck in bucket with fire burning underneath

“I was hoping not to send them on a futile search, and then they would get mad at me,” Kuo told KCBS-TV in Los Angeles.

Kuo didn’t have to worry about leading anyone on a futile chase for long. A rescue helicopter was dispatched to the canyon and Compean was found on a ridge less than a mile from the coordinates Kuo had given.

Compean was found safe and in no need of medical attention. And he couldn’t have been more grateful for Kuo’s unique hobby, telling him, “I really appreciate what you did… I really don’t know if I could get there another day. It was so cold. “

15 Quotes on Being Happy Will Explain the Importance of Positivity