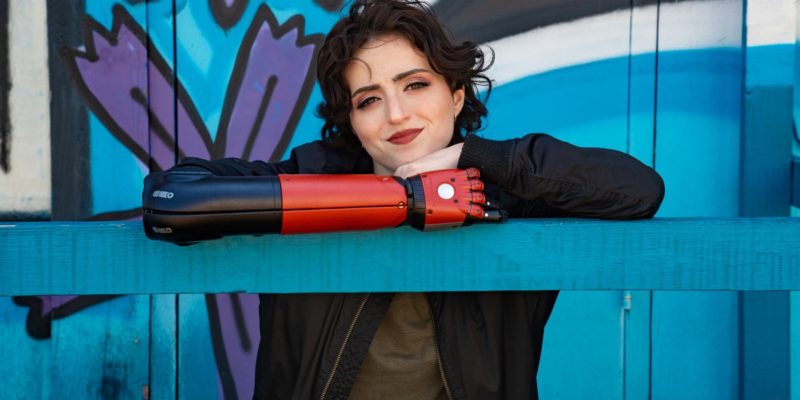 
A gamer bullied when he was young because he was born without a hand finally feels that his disability is not an obstacle, now he has been equipped with a bionic arm inspired by a very popular video game.

Laiken Olive, 21, who identifies as non-binary, was born with a congenital difference in one limb and said they used to hide their disability before receiving the $ 11,000 bionic arm.

The young player has become the first recipient in the United States of the ‘Venom Snake’ arm developed by the British robotics company Open Bionics. Inspiration for your look and design? Metal Gear Solid, soon to become a blockbuster movie starring Oscar Isaac.

In the video game, the Venom Snake character loses his arm in an explosion and uses an iconic red and black bionic limb with detachable missile functionality and devices to stun enemies.

Although the Hero Arm is not equipped with weapons, it is custom built and uses myoelectric sensors to read the electrical outputs of the muscles and convert them into bionic hand movements.

Laiken said they felt empowered by the arm and finally saw its potential after years of being bullied at school. The South Louisianan explained: “I was bullied by my arm, which led to a lack of self-confidence. I doubted myself and just wanted to fit in with healthy people.

“I would wear this cosmetic prosthetic that looked like a hand and wear a jacket over it due to the harassment I experienced.

“I wanted to hide the fact that it was different. It was a barrier or a shield so that people would not know it … but with the Hero Arm I saw all the potential of what I could do with it and it was not about hiding … This whole experience has been so beautiful for me . . “

Laiken started her TikTok account around December 2020 and began cosplaying while proudly displaying her prosthetic arm in different costumes.

In less than six months they have already accumulated more than a million visits and their videos have been seen by people from all over the world.

Upper limb amputees wishing to learn more about the Hero Arm and register their interest you can find more information here.

ELEVATE your friends with good news: share this story….