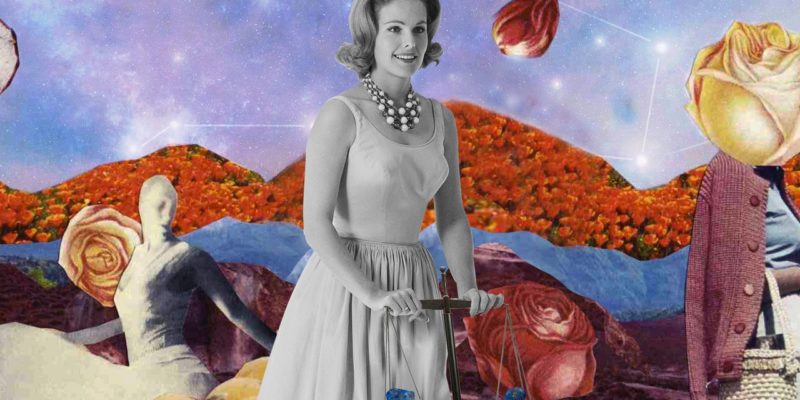 Read what your sign’s 2020 horoscope predictions have in store for you or check out the Libra personality profile.

Welcome to December, Libra. Last month you tried to avoid gossip during a dramatic eclipse. You love to spill tea, Libra, but as the sign of balance, you also try to keep the peace. However, when messenger Mercury enters talkative Sagittarius on Tuesday, December 1, you feel like leaning into your chattier tendencies, gossip be damned. Yes, you like to make sure everyone is happy, but Libras are also known for being flirty, no matter what your relationship status is.

But if you are in a relationship, just remember not to do anything to compromise what you have. Your ruling planet, Venus (the goddess of love), is currently in sexy Scorpio and trines Neptune in Pisces on Saturday, December 5. This transit makes it hard to separate fantasy from reality. Be careful of new relationship energy, that heady high you get at the beginning of a relationship when you’re still getting to know someone. Try to take things as they come, and don’t get too down on yourself if it turns out you’re incompatible.

Just because you have a new sexting buddy it doesn’t mean that you need to commit to them immediately.

Indeed, the first half of December is all about having fun with sex and romance. What it’s not about, however, is making major life changes because you’ve been cooped up all year and have pent up energy. Just because you have a new sexting buddy it doesn’t mean that you need to commit to them immediately. During the new moon and solar eclipse in wild Sagittarius on Monday, December 14, friendly flirtations may get a bit messy. This day acts as a reminder not to make any sudden moves, such as moving in together, getting engaged, or signing any legal documents. Keep things casual for now.

The next day, on Tuesday, December 15, romantic Venus enters adventurous Sagittarius, encouraging you to stay in the moment and keep things light. If you’re in a serious relationship, that just means finding new ways to have fun together, whether it’s by playing a board game or trying out a new sex toy.

The end of 2020 sets the stage for you to enter 2021 like a superstar who knows their worth.

During the second half of the month, your attention turns inward as you begin the process of healing from past wounds. Also on Tuesday, December 15, an astrologically important comet known as Chiron, or the “wounded healer,” goes direct, prompting you to look into any issues that may have been holding you back. This may mean assessing your attachment style, talking to a therapist about unresolved trauma, or working on commitment issues.