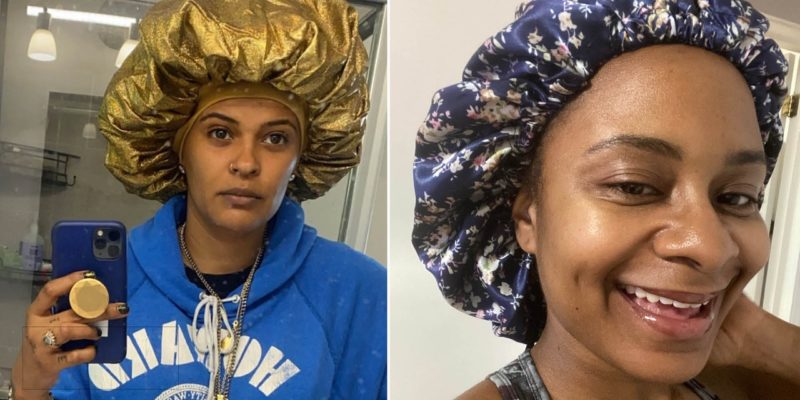 Wearing bonnets is such a tender, interconnected thing for a lot of Black women and femmes and no one deserves an explanation for it. Our hair is complex and beautiful. It takes love and attention — there are some days that all we have the capacity for is a bonnet! And let’s be fucking clear, a bonnet is no different than a hat or a beret or a durag or a cute scarf. It is a protective head covering. Other people have assigned the bonnet to be an indoor, damn near shameful accessory, and Black women are supposed to bow to that assignment.

Black women should and must have the autonomy to show up in this world in whatever way they choose. If that means wearing a bonnet to the airport, dentist’s office, or to pick up their babies, so be it. I wonder if people were this mad at the Black women who wore bonnets to vote when we saved Georgia’s ass? I wonder if people care about women who work and serve the public in their bonnets? Or are people only interested in condemning Black women when we’re occupying spaces of comfort and luxury? Or when we’re in the public minding our beautiful, Black, bonnet-wearing business?

I think it’s important for Black women to have the freedom to wear a bonnet in public because, why not? White women can show up to Zoom meetings sweaty with their hair in a bun after being on a Peloton for an hour. Yet, we’re expected to walk in everyone else’s idea of excellence.

I know plenty of women who wear bonnets outside of their home who are outstanding business people, activists, partners, parents, and educators. To negate that because these people don’t like our hair protector? Literally, get the fuck out of here. This is respectability politics at its core and, I would be remiss if I didn’t mention the privilege I have as a lighter-skinned Black woman, in wearing my bonnet outside. People might talk about me once I’m outside of their presence, but they certainly don’t treat me the way I know some of my darker-skinned sisters get treated.

I see people posting pics at the airport or at the grocery store [of women wearing bonnets] without their consent and it’s usually a dark, dark-skinned woman being talked about. Baby… I know colorism and misogynoir when I see it. All in all, leave Black femmes alone, we know what we’re doing and we also know it’s only a matter of time before a white person gets funding to create a “viral” bonnet collection or before we see bonnets in editorial stories. So until then, if you see us in Target, at the dog groomer, on a plane to the Amalfi coast, or on the train to Harlem in our bonnets, leave. Us. Alone.

By stufflovely
21 hours ago
Uncategorized

We found a few cool items from Taotronics