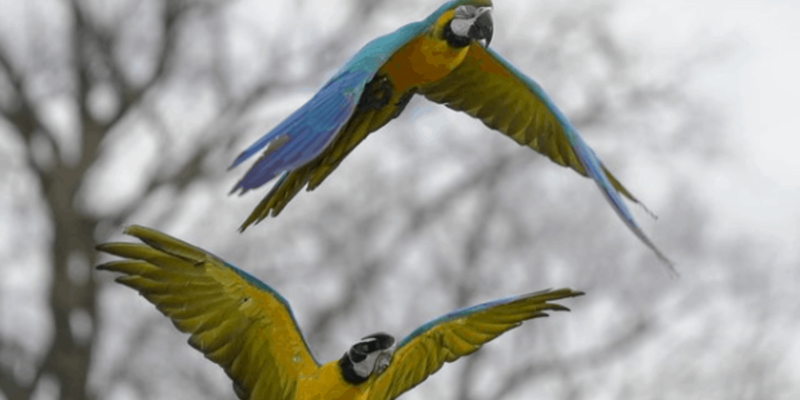 
Mikey and Mia, two adopted macaw parrots, now enjoy a life in freedom thanks to their parents who rescued them. They come from a rather difficult situation, as most people adopt macaws thinking that they are easy birds to care for. However, they actually require a lot of work and attention.

“Families buy them thinking they would be colorful and fun birds and then they realize they are a stupid amount of work and they relocate them,” said their owner. “They are the number one most relocated pet in the world.”

He goes on to say that macaws are very difficult to care for, and many new owners give up after realizing this. They require a lot of attention and a lot of space to fly and move. Mia and Mikey share an aviary together, and their owners created a net over their backyard so they can fly outdoors as well. They were also trained to fly freely, which took many months of practice.

They also require a lot of toys because they need a good amount of stimulation. Mikey and Mia’s dad says he buys them a new one every two weeks or so! In addition to the large space and toys, they need a specialized diet for optimal health. They eat about 15 different fresh fruits and vegetables per day.

While Mikey and Mia have grown to love their human parents, birds still love to fly in their natural habitat.

“The moment we go out and basically let them be free, they are in the happiest place of all.”

The owners said their favorite memory of them is actually when they first flew in the wild. Plus, when Mia and Mikey finally start getting along, she’s up there with her fondest memories.

Advice from the owners for anyone considering adopting a macaw

“If you think you are ready to have a child, then you could be ready to have a macaw. It’s that kind of commitment. They will live forever: 68 years of life. They are extremely loud, extremely messy and require a ridiculous amount of attention. “

Not only do they require a lot of patience and care, but you also need to plan your vacation time in advance.

“You can’t just get up and go on vacation whenever you want. You must have someone trained to take care of them or find accommodation for boarding birds. “

Too, macaw owners they should know that they will have to pay special attention to the diet of the birds. Macaws require a diet rich in vitamins and minerals, which are generally found in nuts, seeds, fruits, vegetables, and parrot food.

Finally, macaws need a lot of training. As highly intelligent birds, they are easily bored without new challenges or tasks to stimulate them. When the macaw gets restless, it may start chewing on things around the house or wreak havoc in some way.

For all these reasons, many people are unable to fully commit to having these birds, so they end up being relocated. If you decide to buy one, be sure to do your research and remember that they will become part of your family. Unlike low-maintenance animals like cats or fish, macaws want to feel included in family activities. They need a “herd” to feel like they belong, otherwise they will likely suffer psychological damage.

When macaws get bored, they become prone to destructive feather behaviors, such as plucking. Be sure to create a stimulating and enriched environment for your macaw with climbing nets and ropes, toys, and a varied diet.

Facts about the macaw parrot

Macaws come from South and Central America, as well as Mexico. Some evidence shows that the Caribbean also had native macaws, such as the Cuban and St Croix’s macaws, but they have now become extinct. Macaws mainly inhabit tropical rainforests, mainly in the treetops. They can also be found in grassland and forest settings.

They have been kept as pets since the early 1900s. The Pueblo Indians in the United States had them since around 1100 AD and coveted the scarlet macaw most of all.

Macaws are commonly classified into two groups: large macaws and mini macaws. Large macaws include those in the genera Ara, Anodorhynchus, and Cyanopsitta. Macaws in this group include the hyacinth, as well as the critically endangered Lear’s macaw and Spix’s macaw. Large macaws can grow up to 36 “long with a wingspan of up to 42”. Mini macaws generally only grow to around 20 inches long and include those in the genera Diopsittaca, Orthopsittaca, and Primolius.

There are 18 different species of macaws, but most of them are not adopted as pets. The most common pet species of macaws include the blue-gold, green-winged, Hahn’s, hyacinth, scarlet, military, and severe macaw.

Many people refer to macaws as the giants of the parrot world. The hyacinth macaw is the tallest parrot, measuring around 40 ”long. Macaws are characterized by long tail feathers and huge beaks. Their beaks are large, curved, and powerful to open the tough shells of nuts and seeds. Their feathers are bright and colorful, from the hyacinth blue of the hyacinth macaw to the scarlet red of the scarlet macaw.

Final thoughts: the macaw parrot is a beautiful bird, but they may not make great pets for everyone

Macaws are undoubtedly majestic, beautiful birds, but they require a lot of attention and work. If you want to adopt one, make sure you have plenty of time to train and play with your macaw. They don’t like to be left alone for long periods of time and they need a lot of affection. Fortunately, Mikey and Mia found a great new home with loving parents who gave them everything they need.

Although at first they did not get along, little by little they warmed up and now they are two peas in a pod. Macaws are surprisingly loving birds with warm hearts and will return all the love you give them ten times. Having a macaw is a lot like having a child, but it can be a very rewarding experience.