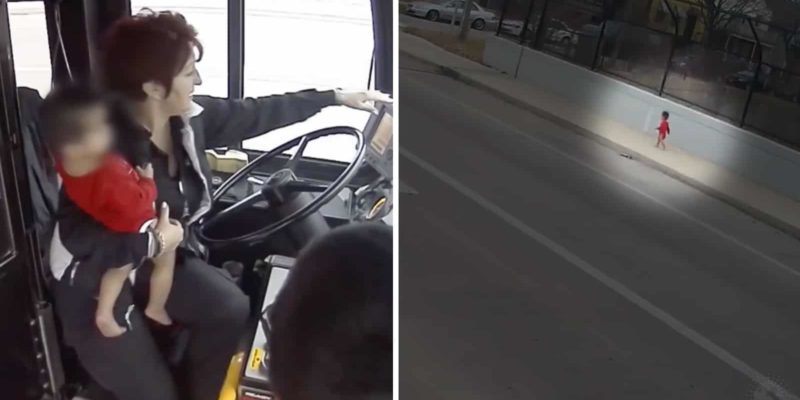 A heroic Milwaukee bus driver saved a baby wandering alone in the cold.

While Irena Ivic was driving her usual route on December 22, 2018, she saw something shocking on a highway overpass. A baby was walking along a busy street without adult supervision. He had no shoes or coat even though it was very cold outside.

He immediately went into action to rescue the poor boy. Irena was driving in the opposite direction, so she parked the bus and crossed the street to help him. In the video, you can see her running in front of moving traffic to save the baby.

When Irena came to him, he was crying, obviously lost and scared. She picked him up and carried him to the warm bus. The Milwaukee County Transit System (MCTS) bus driver I was in shock. How could a parent allow their baby to roam alone in freezing temperatures?

Not to mention, the boy was walking down a busy street without clothing suitable for the weather. She was wearing a red romper and diaper, inappropriate for the weather. When Irena got on the bus with the boy, she said:

The passengers couldn’t believe it either. While they waited for help to arrive, a passenger offered her winter coat to wrap the boy. Irena spoke sweetly to the boy, stroking his hair to keep him calm. Everyone on board the bus helped keep the baby warm and comfortable until first responders arrived.

They did not have to wait long; Firefighters and police officers quickly arrived at the scene. When they walked to the bus, they saw that the baby was already asleep in Irena’s arms. Clearly, he was exhausted from walking the busy roads and trying to keep his body warm.

Then the baby was reunited with his father.

Later, authorities learned that the boy was less than a year old. In fact, he was only 19 months old at the time. Although he was exposed to freezing temperatures, he was not injured. The baby disappeared after the mother had a mental health crisis, according to authorities. She had left him outside, and the boy must have gotten confused, leading him to wander the streets.

They tracked the dad and brought the baby to him.

“I am grateful that I was in the right place at the right time,” Ivic said at a ceremony honoring her for her heroic actions.

Ivic said that she used to be a teacher and has children of her own, so she adores children. He was happy to reunite the sweet baby with his father. Irena is definitely a hero, and this is a perfect example of humanity at its best.

According to the MCTS, this was the 10th time bus drivers found a missing or missing child in recent years.

Other times, Milwaukee bus drivers rescued children in the area.

Not all heroes wear a cape. Most of the time, they are ordinary people like you and me. MCTS bus drivers have a track record of excellence that goes far beyond the requirements of their job. Many of them had saved children from danger, like when Irena Ivic rescued a baby who was wandering the streets. Unfortunately, parents face mental health problems and leave their children unattended. But luckily, the guardian angels are looking out for them.

It seems that in Milwaukee, at least, the bus drivers are always ready to help children in need. It’s stories like these that restore your faith in humanity and remind you that heroes walk among us.