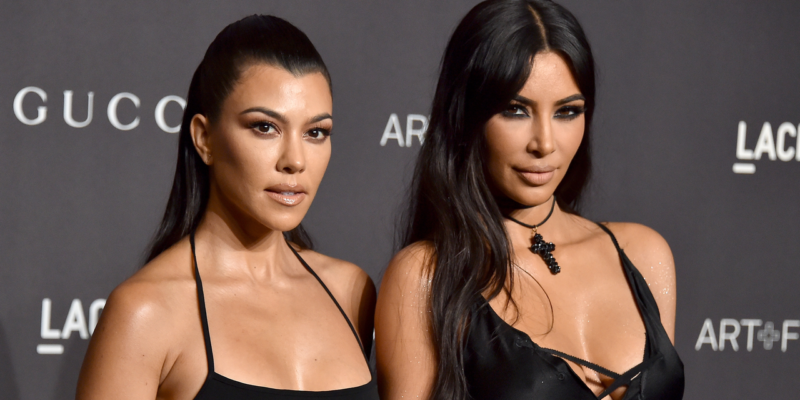 I cackle uncontrollably when people say that celebrities are just like us. Sure, and I also have millions of dollars just lying around — who doesn’t? This week, however, that statement actually has some truth to it, as unexpectedly proven by the least relatable of them all: Kim and Kourtney Kardashian. Kim posted a throwback photo to Instagram on January 28 that proves nobody — not even the most famous of figures — could escape the eyebrow overplucking craze of the 1990s.

“It’s the brows for me…” she captioned the slightly blurred, speckled film photo of herself and Kourtney as (I’m assuming) teenagers. There are plenty of differences between teen Kim and Kourtney and adult Kim and Kourtney, but the most drastic of them all is undoubtedly their eyebrows. With their razor-thin arches spaced so far apart, it’s clear to tell they hadn’t yet learned the “sisters not twins” rule yet.

There’s a lot of other stuff to take in here, too: Kourtney’s braided pigtails, the very in-trend-for-the-time jackets, and the duck-bill clips in Kim’s hair (I can’t tell if she’s preserving a blowout or just wearing them as a fashion statement). But, hey, I can’t pass judgment. We all did regrettable things with our appearances back then.

The Kardashian sisters aren’t by a long shot the only celebrities to have a ‘90s eyebrow flub (and a well-documented one at that). Lucy Hale, who is now known specifically for her thick eyebrows, had the exact same ultra-thin, rounded shape back then. Reese Witherspoon also shared a recent photo from the ’90s showing her own barely-there brows from back then. There’s also Gwen Stefanie, Drew Barrymore, Tyra Banks… you get my point.

We look back on those brows with embarrassment for now, but most beauty trends are cyclical — maybe one day they’ll come back and we won’t be able to believe we ever had such thick eyebrows.

The Best of Muscle For Life: Bodybuilding Show Prep, Cardio or Weights First, and No Excuses