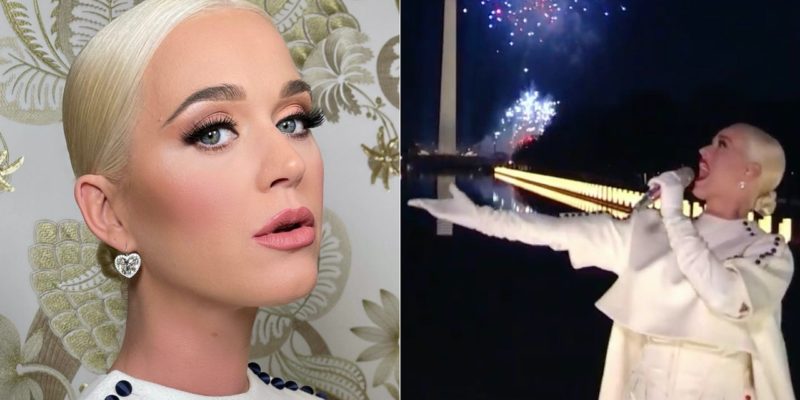 When Katy Perry decided to do her first major performance on a national stage since having a baby, she did it with a bang. Literally. Hundreds, if not thousands, of bangs, actually. The pop star closed out the Celebrating America inauguration special by singing her hit song “Firework” as a seemingly endless supply of actual fireworks filled the Washington, DC, sky. But despite the impressive pyrotechnics and equally impressive performance, we were mesmerized by how phenomenal the new mom looked for the big event.

During the TV presentation on Wednesday, January 20, Perry was seen wearing a cream-colored Thom Browne suit with a full-length skirt, gloves, and a cape with an extra-long train. She topped off the incredibly sophisticated outfit with an equally classy and stunning beauty look.

Hairstylist Rick Henry gave Perry an absolutely flawless, sleek low bun for the performance. Her platinum hair was parted tightly down the middle, revealing not even a hint of contrasting roots. Not a strand out of place, the bun sat at the base of her neck, shining in a swirling knot.

By stufflovely
4 days ago
Uncategorized

Take a look at these bargains at Beautiful Disaster Clothing