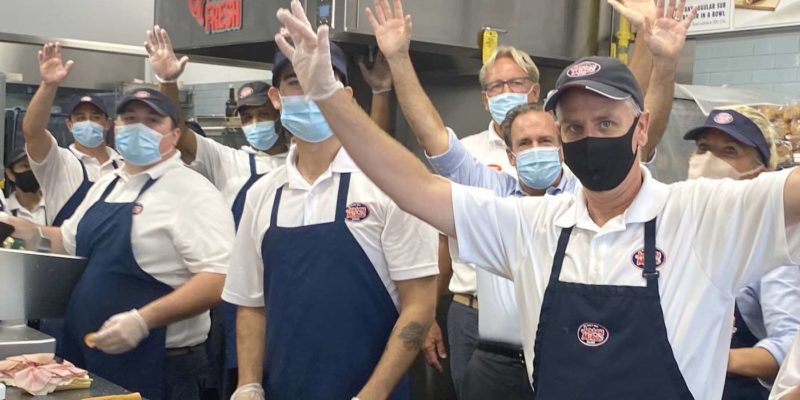 
With the company’s goal of raising $ 8 million, Jersey Mike’s Subs surpassed that mark during its Annual donation month to raise an incredible $ 15 million to help more than 200 charities nationwide.

After accepting customer donations throughout March, the final day culminated with Jersey Mike locations across the United States donating 100 percent of sales, not just profits, to local charities.

More than 1,900 restaurants that are known for their freshly baked bread in the store, the same recipe they started with in 1956, donated every penny of their sales on the 31st to hospitals, youth organizations and food banks.

The total fundraising is double the amount raised in 2019 when the New Jersey-based company donated $ 7.3 million to its communities.

POPULAR: Wisconsin Chick-fil-A worker who won a car in the company’s raffle gives it to a co-worker who rides his bike to work

The results are even more significant this year, as the Day of Giving celebrations were canceled last year due to the pandemic. Jersey Mike’s began the practice in 2011, and over the eleven years it has raised more than $ 47 million for local charities, such as the Make-A-Wish Foundation.

“We really hoped to get it right this year after the disappointment of having to cancel Giving Day last year, and the sheer amount of support from across the country is truly inspiring,” said Peter Cancro, Jersey Mike founder and CEO.

“We are filled with gratitude and admiration for our clients, franchise owners and team members who have helped these charities in such a great way, now, when they need it most.”

Cancro, who bought his first side store at age 17, credits two local entrepreneurs in Point Pleasant Beach, NJ, where he grew up, Jack Baker of Baker’s Lobster Shanty and Bob Hoffman of Hoffman’s Ice Cream, for showing him the importance of give unconditionally to the community.

Since then, the company’s mission has always been: “Give … make a difference in someone’s life.”

SHARE this with Jersey Mike fans on social media …