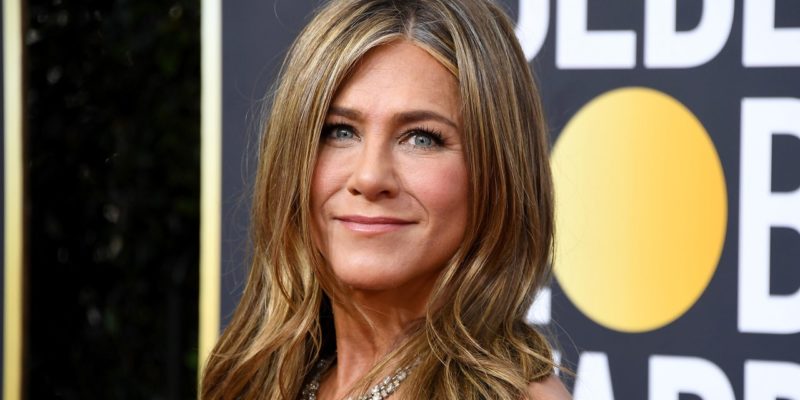 Hello, fellow The Morning Show fans. We’re having a very good week right now, thanks to Jennifer Aniston, who just revealed that she’s returned to filming for the series. Its second season was reportedly planned to debut last fall but was delayed multiple times due to the coronavirus pandemic. Now, however, things seem to be back on track (at least for the time being), if Aniston’s latest Instagram posts are anything to go by. On January 27, the actor posted a selfie from what appears to be a dressing room alongside her long-term and masked-up hairstylist Chris McMillan.

“Aaand, we’re back…” Aniston wrote. She made sure to tag The Morning Show‘s official Instagram account in the post just to make sure we knew what she was teasing. Of course, this is an uber-exciting moment for fans of the show, considering we’ve been hanging off the edges of our seats since the first season ended in December 2019 — but let’s talk about that hair for a moment. This could be a reach, but do I detect some fresh highlights near the front of Aniston’s hair? You can tell me if I’m wrong, but it is looking slightly more platinum than her go-to honey-wheat blonde.

Whatever magic McMillan has infused into Aniston’s hair for season two, it’s working. The show might’ve left us at a cliffhanger (I won’t even attempt to spoil it, but it did include a classic Reese Witherspoon meltdown), but that perpetually pretty hair could make it hard to pay attention to much else when we do get to watch it. Should we really expect anything else from the woman who inspired one of the most popular haircuts of the ‘90s?

With the pandemic still afoot, there’s no telling if Morning Show production will be delayed again — or when the series will be able to make its triumphant return. But at least we get to fawn over Aniston’s hair in the meantime.

Now, see how long hair has evolved within the past 100 years:

How 11 Beauty Entrepreneurs Are Handling Business Amid the Pandemic