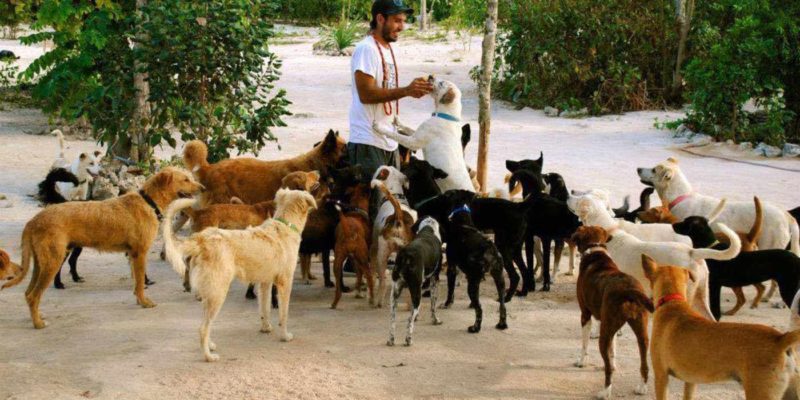 
Ricardo Pimentel may not have had an ark to weather the storm, but he is being hailed as a kind of modern Noah nonetheless.

As the deadly Hurricane Delta battered Mexico’s Yucatán Peninsula, blazing a path of destruction straight to his door, Pimentel herded hundreds of animals, including more than 300 dogs, numerous rabbits, chickens and even a hedgehog, into his home to protect them. of the storm. (A flock of sheep huddle in the yard for safety.)

Although his home took a beating, inside and out, the entire collection survived. “It doesn’t matter if the house is dirty, it can be cleaned.” Pimentel told AP. “Things that broke can be fixed or bought back, but the beauty is seeing them happy, healthy and safe, without injuries and with the possibility of being adopted.”

Pimentel’s actions did not surprise those who know him. The house he shares with his family serves as a Land of Animals (Land of Animals), the 10-year-old animal sanctuary he founded about 20 miles southwest of Cancun.

Knowing supplies could be hard to come by, ahead of the storm, Pimentel posted on social media his concerns for the well-being of his herd. As Delta raged, she also posted photos from inside her home, which looked like a real-life version of 101 Dalmatians, multiplied by three.

Once Delta passed, with so many mouths to feed and a major cleanup after the storm underway, Pimentel didn’t realize his posts had gone viral until donations started pouring in from around the world. Not only that, the neighbors soon arrived after the storm. from the hurricane to help clean up debris and rebuild the sanctuary.

While he was in awe of the generosity of donors and volunteers, Pimentel hopes this moment in the spotlight serves a broader purpose: helping you find forever homes for some of your rescues so you can save even more.

“We would like to think that thanks to all this attention, someone would like to be part of the story and say: ‘I adopted a dog saved from that famous hurricane Delta,’” he explained.

MORE: On this farm, children with special needs connect with injured animals to form healing friendships

The storm may be over, but Pimentel continues to walk, a living testament to the sanctuary’s motto: “Leave traces of goodness for others to follow.”

(CLOCK Ricardo’s video showing his work in the hurricane below).