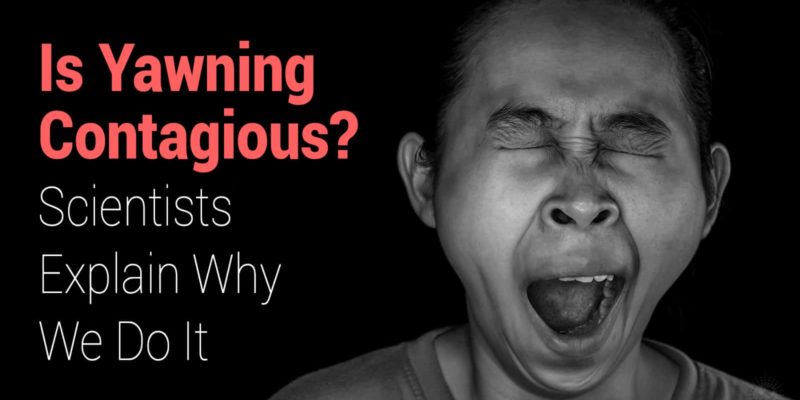 
Yawning has been observed and researched for many years, but there is still much to discover. It has been a mystery all along, but there are some theories about it. Scientists believe they are beginning to find out why humans yawn and if it is contagious.

The definition and mechanics of it are well known, of course. It is a natural body reflex that includes taking deep breaths, opening your jaw wide, and exhaling quickly and forcefully. Yawning causes a feeling of relaxation, stretching of the eardrums and closing the eyes tightly.

One theory why people yawn is that they need oxygen, which brings more oxygen to your body. However, this theory is not well supported and many researchers believe that is not true. It seems to have more to do with brain temperature, empathy, and other factors.

Scientists explain why we yawn

While all of this is still being investigated, scientists I’ve discovered a few reasons why people yawn. They have also worked to find out if the reflex is contagious, as it is believed to be.

Thermal imaging shows that yawning can help cool the human brain. When you inhale deeply during a yawn, cool air enters your mouth and body. This then cools the blood going to the brain.

This theory could explain when you yawn the most when you have a fever. If your brain is hot and this reflex cools you down, expect to yawn more at this point.

This seems to happen whenever the brain is too hot, not just when there is a fever. It removes warm blood from the entire brain and replaces it with cold blood.

Another thing to consider is how often you yawn in winter compared to summer. In the winter, most people yawn considerably less than in the summer. This further supports the theory that it happens when your brain needs to cool down.

3 – To change your state of consciousness

Your body has to function in different ways at different times of the day. Sometimes when you yawn, it is a way for your body to change state. Then your body will be able to function accordingly.

When you yawn at night or before bed, it is your body’s way of preparing to rest. If you yawn when you are bored, it is a sign that your body is shifting to a lower level of alertness. Similarly, if you yawn after exercising, it is because your body is switching from high energy to low energy.

Human beings communicate with each other in physical ways that they are not even aware of. One way to do this is by yawning. It is believed to be an unspoken way of indicating boredom or a need for sleep. Research suggests that this might be the most “contagious” yawn of all.

5 – To compensate for elevation changes

When you’re on an airplane or driving up a mountain, this natural reflex is a way to equalize the pressure in your ear. You are likely to do it unintentionally and continue to do it on purpose when you realize it works.

If you have social empathy, you likely yawn at the same time as other people. This also happens when you are reading or talking about it. Even the mention of a yawn can trigger the reflex.

Many people believe that a yawn is an indication of drowsiness, but this is not entirely accurate. Instead, a yawn is believed to be a way to stay alert. Since you are likely not very alert when you are exhausted, this is probably why it happens continually when you are tired.

When you yawn, your heart rate increases, so it can make you more alert. It only works for a short time, so you will notice that it happens frequently during these times. This is also why you tend to fidget and stretch during this because those are other ways to increase alertness.

When you yawn right after waking up, it helps you stay alert and ready for the day. It will stretch the lungs and tissues and help the body flex the muscles before moving. In addition, it forces the blood towards your head, which will surely make you more alert.

Another way this natural reflex helps you stay alert is by staying more in tune with your surroundings. When you yawn, the muscles in your ears are stimulated, which leads to increased hearing sensitivity. You will be able to hear things that you would not have heard otherwise.

Additionally, activating those muscles will increase your range of motion. Also, you will close your eyes tightly and open them again during a yawn, which will make your sight clearer.

So is yawning contagious?

Now that you know what scientists say about why you yawn, it’s time to find out if you are contagious. You probably yawned when you saw someone else yawn, and this is likely to happen frequently. Also, you may have yawned while reading this, as even the thought of a yawn can trigger it.

As you have probably already guessed, the answer is yes. Yawning is contagious, but only for some people and during certain times.

Empathic people are generally the only ones who yawn when someone else does. The situation also has to allow it. If someone is angry or feels other negative emotions, they may not be as empathetic as they normally would be.

Another contributing factor is how close you are to someone emotionally. You are more likely to “catch” a contagious yawn from someone close than from a stranger.

If you’re still not convinced that a yawn is contagious, try watching a video of people yawning. If you are an empath, it will likely make you yawn at least once. Next, pay attention to when people around you yawn and see if you yawn too.

What to do if you yawn too much

If you think you are yawning too much, you should pay attention to that. While it may be nothing, there are medical reasons for excessive yawning. These reasons include:

Before you panic, however, you should think about your Lifestyle. If some aspect of your life could be causing the excess, you should try to change it first. Normally, it is an easy and common solution, but if the following ideas do not solve it, you should consult your doctor.

How to stop yawning so much

In a way, this goes back to the idea that the need for oxygen causes a yawn. While that idea has been discredited, it is still commonly believed to be linked to it. Although oxygen doesn’t seem to play a role, deep breathing still helps.

A study even published results that showed that nasal breathing helps decrease how often and how often you yawn. Many people suggest taking deep breaths through your nose when they notice that you have been yawning excessively.

If you have to yawn to stay alert continuously during the day, you probably need more sleep. It’s easier to be alert when you’ve had enough rest. Your body will not need to do this natural reflex so that you are more alert if it already is.

Try to limit caffeine in the hours before bedtime, and avoiding alcohol can help, too. You can also set a sleep schedule for yourself, but you must stick to it to be effective. Exercising more and having a comfortable place to sleep will also help.

If you notice that you yawn too much, take a break and move. It will stimulate your brain and help you focus and be alert again.

You’ll yawn less if you’re not hot, so be sure to stay cool whenever you can. Drink water or other healthy cold beverages when you are outside on a hot day. Also, try to keep your indoor environment cool.

Final thoughts on the things that trigger yawning

Yawning is a natural body reflex, but most of the details remain unknown. While scientists and researchers have been working on it for many years, there is still a lot to learn.

Still, the information scientists have provided is pretty incredible. They are beginning to understand why we yawn and it has been confirmed to be contagious. With these facts, there will be many more studies to follow in the future.