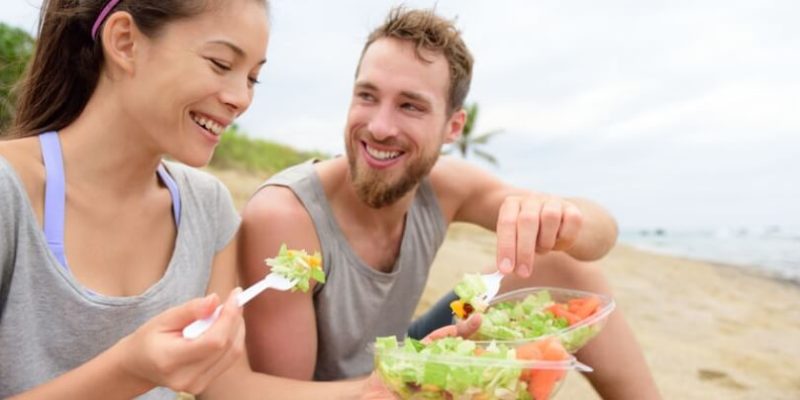 The idea of losing weight slowly is about as appealing to most people as getting slapped in the face with a wet fish.

That is, most people want to lose weight as fast as possible.

Of course, if you want to achieve drastic weight loss, you also have to take more drastic measures when it comes to calorie restriction.

And while this does cause rapid weight loss, some people say it also harms your health. More specifically, they claim problems really begin when you eat less than your basal metabolic rate (BMR).

Your BMR is a mathematical estimate of how many total calories your body burns every day to keep your organs alive.

That is, it’s an estimate of the absolute minimum number of calories your body requires to sustain basic vital functions such as your heartbeat, respiration, hormone production, and so forth.

Eat less than your BMR, some people warn, and you’ll force your body into “starvation mode,” tanking your metabolism, skyrocketing your hunger, and hampering your ability to lose weight (perhaps permanently).

Is this true, though?

Will crossing this physiological tripwire really make your hormones and metabolism go haywire?


According to people in many weight loss circles (especially online forums), here’s what supposedly happens to your body when you eat fewer calories than your BMR:

You can find many anecdotes of people who claim this is why they tried and failed to lose weight and, like Jacob Marley’s exhortations to Ebenezer Scrooge in A Christmas Carol, warn others that the same thing can happen to them if they aren’t careful.

Unlike Marley’s admonitions, though, this really is humbug.

The truth is that there’s nothing inherently bad about eating below your BMR—it doesn’t damage your metabolism, put your body in “starvation mode,” or make it harder to lose weight.

Let’s take a look at why.

Summary: Despite what many people say, eating below your BMR doesn’t damage your metabolism or make it harder to lose weight.

The reason it’s safe to eat below your BMR is simple: although BMR is roughly the minimum number of calories your body needs to sustain life, you don’t necessarily need to get these calories from food.

For example, let’s say a man named Josh has a BMR of 1,600 calories (pretty normal for someone with an average body composition).

Every day, he burns an additional 800 calories through exercise, digesting the food he eats, and sundry activities he does throughout each day (known as non-exercise activity thermogenesis or NEAT), like walking to the office, typing on his computer, and drumming his fingers on his desk.

One day, Josh decides he wants to lose weight quickly, and cuts his calorie intake to 1,400 calories per day—200 calories below his BMR.

According to many people, this is when the physiological claxons start blaring and his body begins slipping into starvation mode due to a lack of energy.

The reality is much less dramatic.

That is, Josh’s body (and yours) doesn’t look at BMR as some kind of biological Rubicon that should never be crossed. When you eat fewer calories than your BMR, your body makes up for the difference by “withdrawing” more calories from body fat stores, and everything keeps running smoothly.

In fact, research shows that if you lift weights and have plenty of body fat to lose, you can eat well below your BMR while losing fat and experiencing no metabolic slowdown whatsoever (at least for a few months at a time).

For example, a study conducted by scientists at West Virginia University found that untrained, overweight people lifting weights and eating 800 calories per day (with only 80 grams of protein) lost 32 pounds of fat in 12 weeks, and retained virtually all of their muscle.

What’s more, they not only avoided “starvation mode,” but their resting metabolic rates actually increased throughout the study (probably thanks to their new training regimen).

In other words, despite eating about half of their BMR, these people experienced an increase in their metabolic rates.

Read: Should You Use a Protein Sparing Modified Fast to Lose Weight?

It bears repeating that these people were very overweight and probably wouldn’t have wanted to maintain this diet for the long-term, but the results put lie to the idea that eating below your BMR foredooms your metabolism.

In fact, despite the prevalence of the “eating-below-your-BMR-is-bad-for-you” myth, no studies to date have shown that eating below your BMR is uniquely bad for your metabolism.

Summary: When you eat fewer calories than your BMR, your body uses the energy stored in body fat to make up the difference. Thus, eating below your BMR isn’t uniquely bad for your metabolism.

Any amount of weight loss typically causes a slight decrease in metabolic rate, though it’s not nearly as significant or long-lasting as many people believe.

This holds true whether you eat below your BMR or not.

A salient example of this comes from a study conducted by scientists at the Norwegian University of Science and Technology in which 171 overweight women ate just 800 calories per day (about 400 to 600 less than their BMR) until they achieved a healthy body mass index.

Did this “destroy” their metabolism?

Nope—the researchers found that the participant’s metabolic rates only dropped about 50 calories per day by the end of their diets, and a year after losing weight, had basically fully recovered.

These findings are in line with several other studies that have shown the metabolic decline associated with dieting, including long periods of very low-calorie dieting, ranges from less than 5 to about 15%.

Contrary to what many “experts” say, though, this change in metabolic rate has nothing to do with “metabolic damage.”

Scientists have known for decades that dieting temporarily hampers metabolic rate and that this can make it harder (but not impossible) to continue losing weight.

If you’re interested in understanding how these terms differ, as well as learning everything else you need to know about “metabolic damage” and “starvation mode,” check out this article:

So, although eating below your BMR isn’t uniquely bad for your metabolism, any kind of calorie restriction tends to decrease it slightly.

This is an important point to remember, as many people are under the impression that so long as they eat above their BMR, they won’t suffer any negative effects of dieting, but this is also false.

You can still experience metabolic slowdown, muscle loss, fluctuating hormone levels, increased hunger, loss of libido, compromised immunity, nutrient deficiencies, and menstrual irregularities, as well as a host of psychological pitfalls, including depression, lethargy, and irritability while eating above your BMR.

If you’re already relatively lean (research shows very overweight people are more resistant to metabolic decline and muscle loss), and you start eating around 2,000 calories per day, you could still lose muscle mass and reduce your metabolic rate, despite eating 200 calories more than your BMR.

At bottom, severely restricting your calorie intake comes at a price, but this is true whether you eat below BMR or not. Eating below your BMR is no more “dangerous” than eating above it.

In fact, I’d argue that the hullabaloo over eating below your BMR lulls people into a sense of false security.

Just restrict your calories, don’t eat below your BMR, and you’ll get the body you want, is an appealing but facile attitude.

While calorie restriction is important, you probably won’t be happy with how your body looks if you don’t also lift weights, follow a high-protein diet, and eat a healthy diet. What’s more, you can “get away” with restricting your calories (even below your BMR) if you take advantage of these other weight loss “tools.”

Summary: Restricting your calorie intake typically causes a slight, temporary drop in metabolic rate whether you eat above or below your BMR—eating below your BMR isn’t inherently more “damaging” than eating above it.

How Fast You Should Try to Lose Weight

Instead of determining how many calories you should eat based on your BMR, it’s better to look at your TDEE.

As you’ll recall, TDEE stands for total daily energy expenditure, and it’s a mathematical estimate of how many total calories you burn throughout the day.

As you now know, eating below your BMR isn’t inherently bad, but eating significantly fewer calories than your TDEE can cause some negative side effects.

The biggest problem with very low-calorie dieting is that there’s a limit to how much body fat you can burn per day before your body starts breaking down muscle tissue for energy. Specifically, muscle loss tends to rear its head for most people when they restrict their calories to less than about 75% of their TDEE (about a 25% calorie deficit).

Read: How Fast Can You Lose Fat without Losing Muscle? (According to Science)

Now, it’s worth noting that this tends to be above most people’s BMR, so it’s technically accurate to say that you generally don’t want to eat fewer calories than your BMR. This isn’t because there’s something inherently wrong with eating below your BMR, though, but with very-low-calorie dieting on the whole.

The one exception to this rule would be people with quite a bit of fat to lose (men who are 25+% body fat and women who are 35+% body fat), as they can lose fat faster without running into the same problems.

As you learned a moment ago, research shows these people can eat significantly below their TDEE (even below their BMR) without losing muscle or reducing their metabolic rates.

Summary: If you want to lose fat quickly without losing muscle, experiencing strong cravings, or significantly reducing your metabolic rate, aim to maintain a calorie deficit of about 20 to 25% (75 to 80% of your TDEE).

The Bottom Line on Eating Below Your BMR

The idea that eating below your BMR is bad for your metabolism has become firmly entrenched in the fitness space, but it’s wrong.

In reality, your body responds to eating below your BMR the same way it responds to calorie restriction of any sort—it simply breaks down more body fat to keep your organs supplied with energy.

Thus, there’s nothing inherently bad or unhealthy about eating below your BMR.

That said, any kind of severe, prolonged calorie restriction can cause problems whether you eat above or below your BMR. More specifically, you generally don’t want to eat less than about 20 to 25% below your total daily energy expenditure (TDEE), as doing so can cause muscle loss and exacerbate metabolic slow down.

So, at the end of the day, eating below your BMR isn’t inherently bad, but you generally want to avoid very-low-calorie dieting of any kind.

If you want to lose weight without running into metabolic hobgoblins, severe hunger, or muscle loss, aim to maintain a calorie deficit of around 20 to 25% below your TDEE.

What’s your take on eating below your BMR? Have anything else to share? Let me know in the comments below!