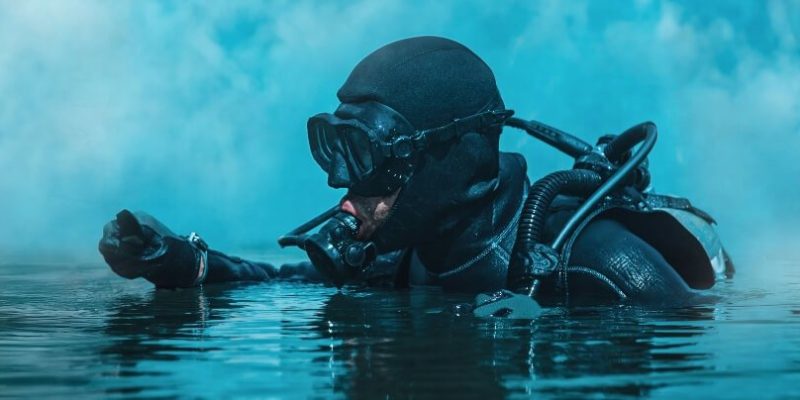 There’s no question that Navy SEALs are veritable ripsnorters.

They’ve had a reputation as free-wheeling bruisers since the 1960s, but their recent missions in the Middle East and increased media coverage have propelled them to near mythical status. (There’s even a genre of romance novels about SEALs now).

As they’ve gained popularity, journalists, screenwriters, bloggers, YouTubers, and even government officials have been quick to capitalize on the public’s interest in their exploits. For example, a quick google search for “navy seal training” comes up with the following:

“How Navy Seals Do the Impossible”

“Can You Complete a Navy SEALs Workout Routine?”

And it makes you wonder . . . what is Navy SEAL training really like?

Do I have what it takes to do it?

Will it help me get in shape?

That’s what you’ll learn in this article.

I should say right off the bat that I’m not a Navy SEAL, and everything in this article is gleaned from books by and about Navy SEALs and a few conversations with SEALs and other members of the US military. So, take it with a big grain of (sea) salt.

That said, by the end you’ll have a good understanding of what Navy SEAL training is like (at least the physical components) and whether this kind of training will help you get in shape.

Who Are the Navy SEALs?

First, a note on the name. This is a seal:


And this is a SEAL:

Point being, SEAL is an acronym that describes where these soldiers are trained to operate: Sea, Air, and Land. In other words, they’re expected to be able to complete missions in any environment. Although much of SEAL training focuses on swimming and diving skills, they’ve taken part in missions ranging from the streets of Mogadishu in Somalia to the Hindu Kush mountains in Afghanistan.

As you might expect, being prepared for these unforgiving environments requires a unique blend of resilience, adaptability, and physical conditioning.

This is also why Navy SEALs are considered one of the premier units in the US military. The SEALs were officially formed in 1962 shortly before the Vietnam War, but various units in the US Navy had been carrying out SEAL-esque missions since 1942—guerilla warfare, sabotage, espionage, reconnaissance, underwater demolition, and so forth.

For most of the SEAL’s history, their training and missions were cloak-and-dagger, as a central tenet of SEAL culture was “quiet professionalism.” In fact, part of the official Navy SEAL Ethos is, “I do not advertise the nature of my work, nor seek recognition for my actions.” Hence, aside from tidbits of information about their training, not much was known about what exactly SEALs did or where they did it.

This largely changed after September 11, 2001, as SEALs became an integral part of the “war on terror.” Since then, ex-SEALs have published a slew of memoirs elucidating their training and missions, including Chris Kyle (American Sniper), Mark Owen (No Easy Day), Marcus Luttrell (Lone Survivor), Jocko Willink (Extreme Ownership), Robert O’Neill (The Operator), David Goggins (Can’t Hurt Me), and others.

Training to become a Navy SEAL is a multiplex process that can be divided into roughly four phases:

Each of these phases also has various subphases, but the details are beyond the scope of this article.

After these four phases, SEALs are assigned to a team and then undergo another period of intense training to prepare them for deployment overseas, which often lasts around a year. All in all, it takes about two to three years of near-continuous training from signing up to going on your first mission as a Navy SEAL.

Only about 10 to 20% of candidates make it through the entire “selection” process, as it’s called, an attrition rate that’s similar to other elite units such as the Air Force Pararescue Jumpers (“PJs”) and Army Special Forces (“Green Berets”).

Let’s look at each phase.

Before anyone is given the opportunity to try to become a SEAL, they have to pass the Physical Screening Test (PST). If you can’t pass this initial hurdle, your chances of making it through actual SEAL training are basically nil.

The PST test consists of five exercises: swimming, push-ups, curl-ups (crunches), pull-ups, and running, all of which are completed in one workout with varying amounts of rest between each exercise. After finishing the PST, you enter your results in the Navy’s SEAL PST Calculator to see how you stack up.

There are also two sets of standards for the PST: One for officers (soldiers in a position of higher leadership) and one for enlisted men. There’s also a minimum standard and a competitive standard for each physical test. You’re expected to be able to do at least the minimum standard for each test, although your chances of becoming a SEAL are much higher if you can get close to the competitive standard. 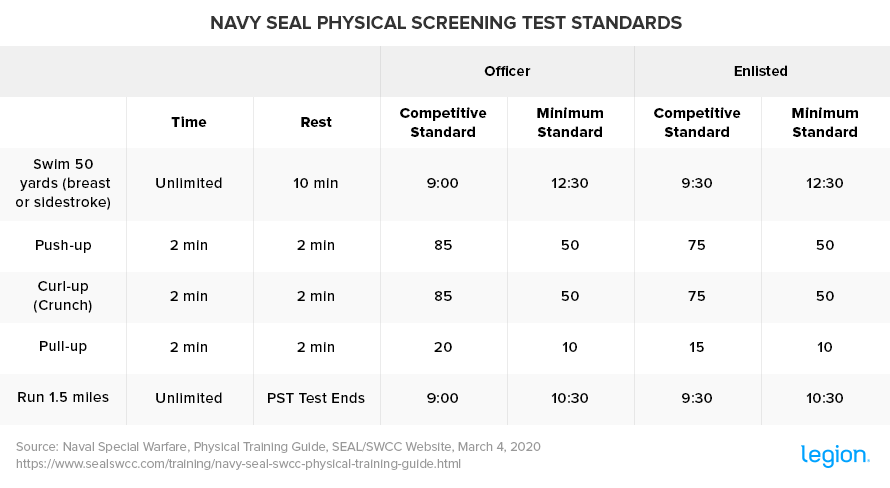 As you can see, these benchmarks are challenging, even for someone in good shape.

This is the first phase of “real” SEAL training, and is designed to prepare SEAL candidates for the more intense phases that come next.

The training during this phase largely consists of the same exercises from the Physical Screening Test: swimming, push-ups, curl-ups, pull-ups, running . . . and more running.

BUD/S (pronounced “budz”) is considered by many to be the most difficult phase of SEAL training. It involves almost six months of non-stop physical conditions and tests, with the tests becoming increasingly challenging from week-to-week.

After an initial three week orientation phase, SEAL candidates begin the 7-week physical conditioning phase of BUD/S. The first three weeks of this phase involve increasingly challenging physical training, leading up to the fourth and most notorious week—“Hell Week.”

During Hell Week, which lasts about five days, SEAL candidates often run over 200 miles, do thousands of push-ups, and spend hours carrying logs, boats, and each other. What’s more, they do all of this while soaking wet, covered in sand, being yelled at, taunted, and harangued by instructors, and with no more than four hours of sleep per night.

As Rick Kaiser—an ex-Navy SEAL who fought at the Battle of Mogadishu—explains, “No one is prepared for BUD/S.”

As difficult as BUD/S is, it’s worth noting that other branches of the US Military have similarly challenging physical training (for instance, many soldiers have said the Special Forces Qualification Course, Ranger School, and Air Force Pararescue are similarly demanding).

While this phase is still very physically demanding, it’s more focused on burnishing the candidate’s technical proficiency than testing their mettle.

(There are a few other smaller phases I left out—such as a 3-week parachute course—but these four phases form the bulk of SEAL training).

So, if this has whetted your appetite for masochism, you’re probably wondering—does it make sense for you to train this way?

The media and movies like to play this up as well—painting SEALs as the physical equivalent of NFL linebackers who just happened to join the Navy instead of the New England Patriots.

If you read a few SEAL biographies or talk to former SEALs, though, you’ll quickly learn this is a myth.

The single most important thing to understand about Navy SEAL training—or physical training for any elite military unit—is that the training isn’t really about getting you in shape (you’re expected to be in great shape when you show up). It’s not about losing weight, improving muscle definition, or even making you stronger.

It’s about teaching you that you can withstand more discomfort, pain, and misery than you think you can.

It’s about plumbing the depths of human endurance to see how you respond when you’re at the end of your tether.

“SEAL training really doesn’t have a lot to do with how big and how strong and how fast you are” explains Admiral William McRaven, an ex-SEAL, four star admiral, and former commander of all US special forces (USSOCOM). “There’s only one thing you have to do in SEAL training. And that’s not quit.”

Or as some soldiers like to joke, you have to be “too dumb to give up.”

Read: You Can’t Mess This Up

The point being—much of the physical training SEALs do is more about building mental fortitude than fitness. That’s not to say that it won’t help you get fit—but running hundreds of miles, carrying logs in knee deep surf, and doing push-ups till you puke isn’t necessary or beneficial for building a great body.

While SEALs are in great shape compared to your average American, they aren’t necessarily elite athletes in the sense that most people think. Instead, you could say they’re elite sufferers. They can bear up in a way most can’t.

In other words, SEAL training uses physical challenges (running, swimming, pull-ups, etc.) as a way to develop mental toughness. Getting fit is more of a side effect than the primary aim.

That said, another goal of SEAL (and other military) physical training is to turn SEAL candidates into highly effective generalists.

SEALs are expected to be good at many different physical tasks—but not the best at any one task. This includes long-distance swimming and running, navigating obstacle courses, hiking with a heavy backpack, climbing ropes, and more, which is why they spend the bulk of their time doing cardio.

While this burns a lot of calories and can help you get fit, lose fat, and develop mental toughness, it’s not ideal for building muscle or improving your body composition.

Thus, it’s not surprising that your average SEAL isn’t a shredded bodybuilder with biceps splitting the seams of their t-shirt. Instead, they look far more normal than you’d expect. This is probably a rough average of the “SEAL physique”: 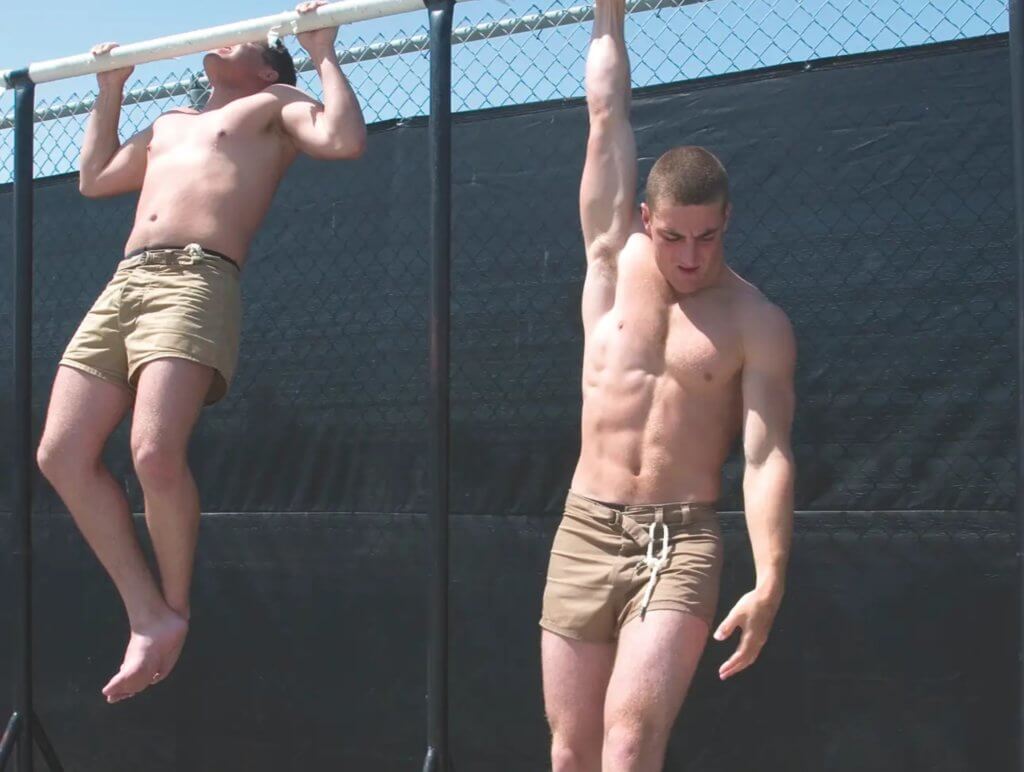 Or perhaps this gent—ex-SEAL David Goggins: 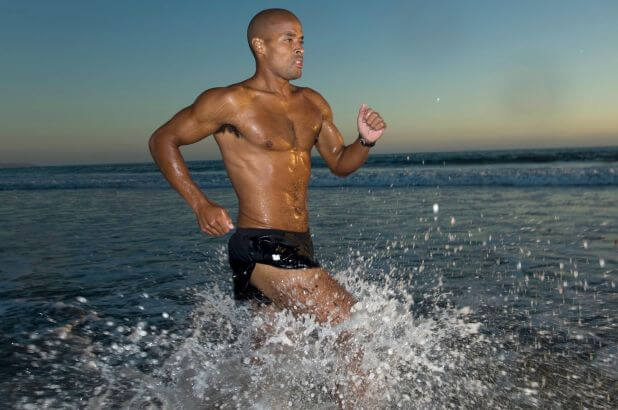 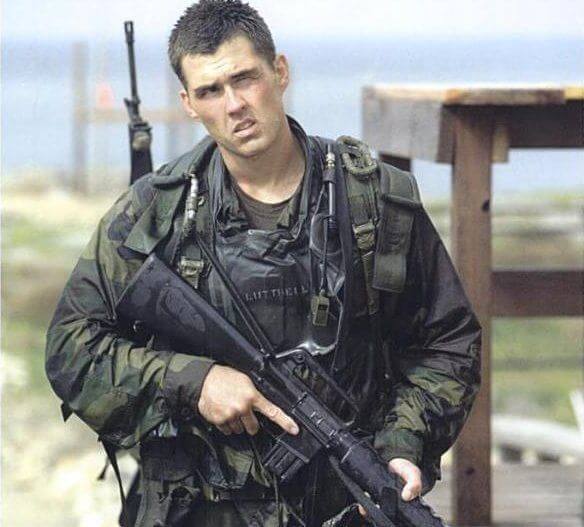 Basically, about 10 to 12% body fat with maybe 15 to 20 pounds more muscle than your average dude (women are allowed to try out for SEAL training, but none have become SEALs as of this writing).

So, circling back to the original question—should you train like a navy SEAL?

This depends on what you want:

And if you want to improve your mental resilience, there are many productive ways to do this that don’t involve training like a SEAL. Here are a few that will fit the bill:

While SEALs tend to be in great shape, it’s important to remember that their training isn’t necessarily optimized to help them lose fat, build muscle, or get stronger. Instead, the primary aim is to psychologically prepare them for the rigors of their profession, not to turn them into super athletes.

Thus, chances are good you don’t need to (and probably shouldn’t) train like a Navy SEAL.

If your goal is to build a body you can be proud of, focus on strength training, following a proper diet, and doing enough cardio to improve your body composition and endurance.

What’s your take on Navy SEAL training? Have anything else to share? Let me know in the comments below!