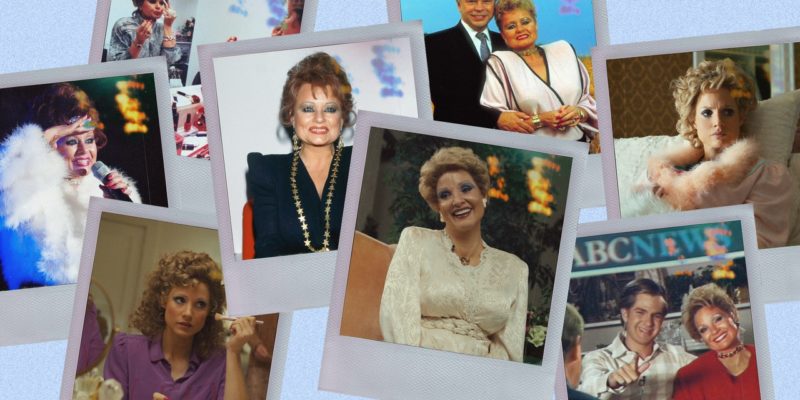 Despite her financial success, Bakker still preferred to buy drugstore makeup, and sometimes bought her makeup at the swapmeet, so Dowds did the same to create the looks. Because Bakker’s favorite mascara, L’Oreal Lash Out, had been discontinued sometime in the early aughts, Dowds figured out a good substitute was L’Oréal Voluminous Original Mascara (coated over Ardell Individual Knot Free Flare Lashes). Sometimes Dowds would reuse the lashes so they looked even more realistic: “Tammy said, ‘Who said you can’t put mascara on fake lashes? I do it all the time.’ And so that’s what we did.” For eyeshadow, Dowds used quads from the Revlon ColorStay 16 Hour and L’Oreal Paris Colour Riche collections. At least nine different Revlon lipsticks were used, including the shade Cherries in the Snow, which has been in the brand’s lineup for decades. For Bakker’s always-impeccable manicure, pre-painted Kiss Press On Nails were used.

According to Dowds, there were two key elements in creating Tammy: the beauty side and the prosthetic elements. “It was super important to me that we never lost sight of the beauty aspect of Tammy’s makeup,” she says. “Combining prosthetics and beauty can be challenging at the best of times, but I believe more so when recreating Tammy; her look was ‘large’ in real life, and combined with prosthetics I was always aware of the risk of crossing a sometimes very fine line between being authentic, and going over the top in an untruthful way.”

The Making of Tammy’s Face

Justin Raleigh, the film’s prosthetic makeup designer, says that when he’s designing prosthetics, he tries to find the “hallmark elements” that are similar between the actor and their character. “Obviously, with Tammy, it’s her cheeks; she has these big round cheeks, and Jessica has a very sculpted, sort of angular face, so that’s a key hallmark element,” Raleigh explains. “You don’t want to completely lose your actor, but you need enough to transform them into the other person.” Aside from enhancing Chastain’s cheeks so they resembled Bakker’s, the prosthetic work included filling in Chastain’s chin dimple, pulling her nose up a bit, and changing her lip line.

Keeping a balance between authenticity and avoiding caricature was an important focus for the team. If an eyelash fell on Chastain’s cheek or her mascara was smudged, and it worked for the scene, they might keep it. But since Bakker’s appearance was often fodder for late-night talk show hosts, Dowds was “very conscious” of not perpetuating that with her makeup. “You never want the audience to be taken out of the film because something that you have done pulled them out of it, or something became so distracting,” he says.

The Wigs of Tammy Faye

‘Greener and safer’: one of the busiest streets in London goes car-free