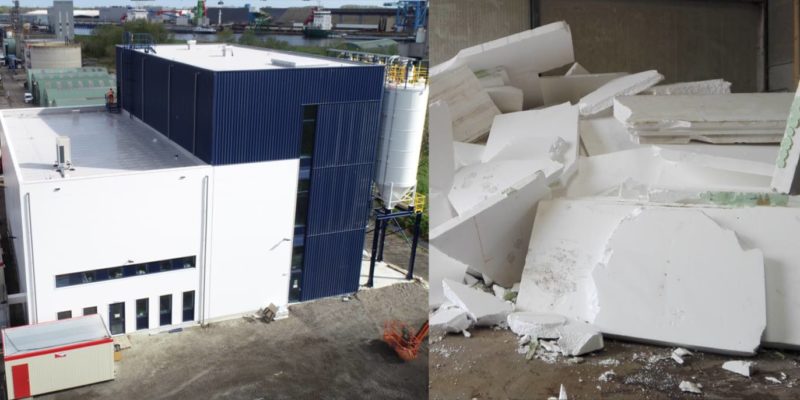 
Although styrene is naturally found in foods like strawberries, cinnamon, and coffee, when it binds with other chemicals to create foam insulation or packaging to protect sensitive electronic devices, it becomes nearly impossible to recycle. A second new plant will change that in Europe.

Being 98% air, Styrofoam is not profitable to store or ship, but a huge new recycling plant in the Netherlands has overcome this problem to recycle waste expanded polystyrene (EPS).

The PolyStyreneLoop plant in Terneuzen, the Netherlands, scheduled to open this week, was built to demonstrate the technical and economic feasibility of a large-scale closed loop solution for recycling EPS waste.

The PSLoop facility will begin by recycling EPS foam insulation using a technology-based process that makes it a new, high-quality raw material. All kinds of impurities, such as cement or glue residues, as well as the HBCD additive, will be safely removed while the valuable bromine is recovered.

RELATED: The World’s Largest Wind Turbine Manufacturer Says All Its Blades Will Soon Be Fully Recycled

“This plant shows how the EPS industry is always looking for ways to boost its recycling capabilities,” said Lein Tange, Co-Director of PolyStyreneLoop. “The purpose of this plant is to pave the way for the construction of similar EPS recycling plants in the rest of Europe.”

Benefiting from a grant from the European Union, it has been built by a Dutch non-profit organization whose members comprise more than 70 industry representatives from the entire styrofoam value chain.

The Terneuzen plant will have the capacity to recycle 3,300 metric tons of styrofoam demolition waste from the Netherlands, Germany and other countries, demonstrating the technical and economic feasibility of a new recycling process in which styrofoam containing HBCD they can be fully integrated into the circular economy instead of filling landfills.

CHECK: How to turn plastic waste from your recycle bin into profit

“It is a real advantage that we can do this with roughly the same energy input as mechanical recycling and the energy we use comes solely from the windmills,” said Jan Noordegraaf, co-director of the plant.

Although the PSLoop plant will recycle EPS waste from construction and building, it will also later recycle extruded polystyrene, also known as Styrofoam, which is used to make cups, plates and containers.

The Netherlands is not the only place where EPS is recycled, in the UK, Molygran has been recycling that nation’s polystyrene, accepting any grade of white expanded polystyrene, “undecorated, clean and dry.” They reported in January 2020 that enthusiastic recyclers were shipping EPS from across the UK, contributing to their staggering 37 tonnes removed from landfills the previous year.

SIGHT: California Highway has become the first state highway made from recycled plastic in the US.

DELIVER this fantastic good news to social media, where it can be recycled …