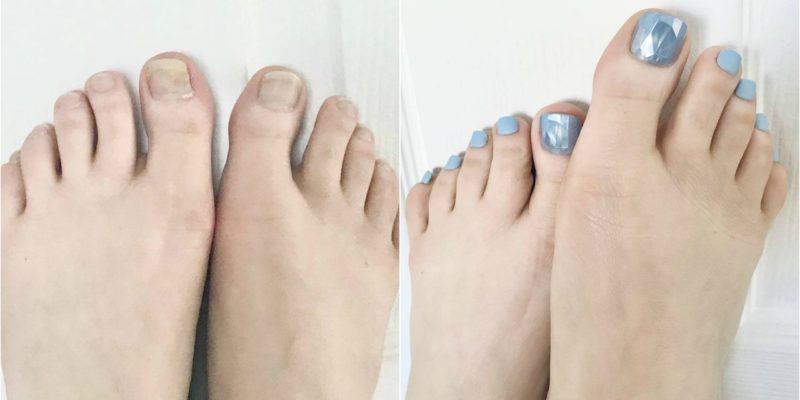 It was more than a decade ago when I received horrifying news: My best friend had chosen strappy, open-toe shoes for her bridesmaids’ ensembles. At the time, I owned no open-toe shoes — maybe flip-flops for quick dog walks or the few-and-far-between trip to the beach — and for what I deemed good reason. My toenails were impossibly short.

It was my own fault. I’d been an anxiety-driven nail picker my entire life, scratching and peeling my fingernails down to the quick. And when I ran out of fingernails to destroy, I’d seek out my toenails. The outcome wasn’t pretty, but closed-toe shoes hid the evidence of my habit. Closed-toe shoes weren’t an option for the approaching wedding, however, and I had neither the time nor restraint to grow them out for the event.

My solution at the time was something people scoffed at when I said it out loud but either marveled at or didn’t blink an eye when executed: press-on toenails. I found a “French pedicure” set by Kiss, and while I’ve never really loved the white-tip look, they fully did the job. They made it seem like I had not-ravaged, nicely polished toenails, staying put through not only the wedding but several days after. I’ve never forgotten them and, in fact, remember them quite fondly.

For reasons I can’t even begin to explain, I’ve moved past my more than 30-year nail-picking habit, and both my finger and toenails have grown out quite nicely. I’m not the most talented polish applier, but that’s been OK — I became a nail-salon regular for manicure and pedicures. But once the pandemic made that impossible I found myself at a loss.

See, my fingernails look plenty nice with just a clear coat. But while my toenails are longer now, the damage from my former compulsion is apparent — especially on my left big toenail. While most of the nails look normal-ish, a big ol’ chunk of my left big toenail is noticeably yellow. Has been for a couple of years. I’m not sure if it’s fungus — it doesn’t hurt or smell funky — or if it looks that way because there’s literally no quick left under that part of the nail (when I said I’d pick down to the quick, I actually meant I’d pick the quick, too), but it ain’t cute. Dermatologist Deanne Mraz Robinson tells me that a yellowness doesn’t necessarily mean it has fungus or is infected — that dark nail polish can stain the color of our nails and make it look yellow — but I want to conceal it either way.

Deciphering Words in the Woods