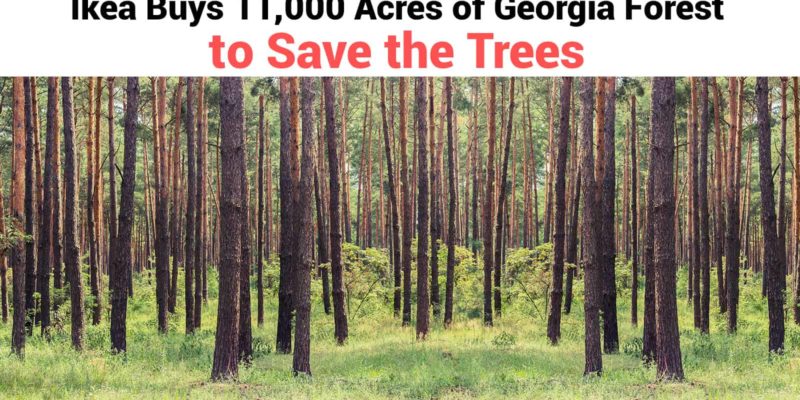 If we want a greener and more harmonious Earth, we have to do our part to save the trees. Recently, the Swedish company Ikea decided to buy 11,000 acres of forest in southeast Georgia to protect the planet. Ikea’s investment group, The Ingka Group, bought the land to safeguard it from development and protect plants and animals. Hundreds of different species call the forest home.

The IKEA subsidiary owns and operates the majority of the retail chain stores. They are committed to helping protect the environment as much as possible. The Ingka Group recently acquired land in Georgia near the Altamaha River Basin from The Conservation Fund. The nonprofit conservation organization protects more than 8 million acres of land in the US.

“We are honored to work with Ingka Group and applaud their dedication to preserving and improving the quality of forests in the US and Europe. Well-managed forests provide essential benefits, including clean water and important wildlife habitat, as well as mitigating climate change, ”said Larry Selzer, President and CEO of The Conservation Fund.

About the non-profit organization

The non-profit organization sold the land to Ingka Group due to its track record of responsible forest management. 350 species of plants and wildlife call the southeastern Georgia forest home. This includes the endangered longleaf pine, which can live for more than 300 years, and the tortoise. Unfortunately, most of the longleaf pines it disappeared in the 1920s, and today coverage has dropped to less than 3 percent.

As for the tortoise, the main threats to its population include habitat destruction, fragmentation and degradation. According to the Florida Fish and Wildlife Conservation Commission, urbanization and development have contributed significantly to population decline. This makes IKEA’s move to protect precious land in Georgia even more crucial. Since IKEA decided save the trees In this area, wildlife will not have to worry about the destruction of their home.

IKEA has even bigger plans than saving trees

IKEA recently announced that it planned to become carbon neutral by 2030. The company published a detailed plan on how it will commit to being greener. Future goals include eliminating all single-use plastics from its restaurants, bistros, and cafes. Furthermore, IKEA only wants to use sustainable renewable materials in its range of home furnishings by 2030. They have already made great strides towards this goal; In January 2020, they stopped using single-use plastics in home furnishings.

According to their website, here are some other green commitments they have made:

Regarding forest management, Ingka Investments now owns 136,000 acres in the United States where it acquired land, including Georgia, South Carolina, Alabama, Texas and Oklahoma, according to managing director Krister Mattsson.

“We are committed to the sustainable management of our forests and, at the same time, meeting our business objectives. In all our properties, we pay special attention to guaranteeing the protection of the environment, so we are happy to see that our efforts to work with responsible forest management are seen and reliable, ”he said.

The Conservation Fund has given the Ingka Group legally binding conditions to which it must adhere. These include protecting the land from fragmentation, reusing the longleaf pine forest, and ensuring the safety of the tortoise. From the the turtle is in danger of extinction, it is essential to protect them in the forests of Georgia. Furthermore, under these agreements, the public can still have access to forest land.

Ingka Group’s proven track record of helping save the trees

Ingka Group currently maintains and owns about 248,000 hectares (approximately 613,000 acres) of forest in the US and Europe. Countries in Europe where they have acquired land include Estonia, Latvia, Lithuania, and Romania. To ensure that the IKEA subsidiary adheres to environmental and social guidelines, the Forest Stewardship Council audits its forest management. In all the countries where the group owns the land, the management units have obtained the FSC certificate of responsible forest maintenance.

Between September 2019 and August 2020, Ingka Group planted 600,000 seedlings on 480 hectares (1,186 acres) in the US worldwide. The company planted almost seven million seedlings.

“The transfer of these lands to Ingka Investments completes our Working Forest Fund® process, through which we identify and purchase important private forests at risk; develop sustainable collection and restoration plans; securing permanent conservation protections to block fragmentation and development, and then reselling the permanently conserved forest to a public or private buyer. ”~ Larry Selzer

In addition to its commitment to saving trees, the furniture store giant announced other green business plans. Have begun buy used IKEA furniture of customers for resale and also used electric vans to transport items. The company offered vouchers of up to 50% of the original sale price. He launched this idea last Black Friday to encourage customers to reduce consumption.

“By making sustainable living simpler and more accessible, Ikea hopes the initiative will help its customers take a stand against binge drinking this Black Friday and for years to come,” said a spokesperson.

IKEA is paving the way for a cleaner world with its commitment to save the trees and adopt greener practices. Hopefully, other companies will follow suit in the future.

Final Thoughts: IKEA Plans to Save Trees by Acquiring 11,000 Acres in Georgia

In addition to buying land in four other US states and four European countries, IKEA now owns land in Georgia. The company is committed to protecting as much forest as possible to help save the trees. So far, he owns and manages about 613,000 acres worldwide and has planted 7 million seedlings. IKEA hopes that your commitment to protecting forests along with the vision of becoming carbon neutral by 2030 will inspire others.

If all the companies in the world operated in an ecological way, we would have a much cleaner and greener Earth. We hope that IKEA will create a domino effect and motivate other companies to change their practices.

School Surprises Hero Custodian With $35,000 Collected As Special Gift of Thanks