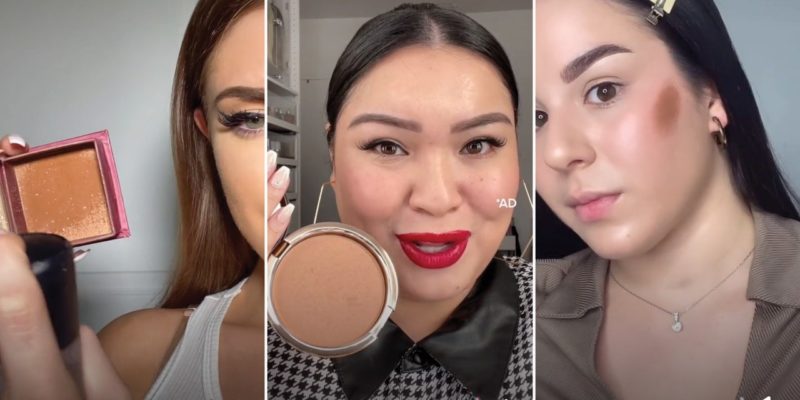 Bronzers are one of those products that you can’t put down once you start using it. They add warmth and radiance to the skin, even after the summer days are long gone. And they’re having an especially major moment right now because TikTok users are raving over a viral hack that allows you to manipulate powder bronzers into cream formulas.

The technique is simple: Spritz whatever setting spray you have onto your bronzer, swirl your brush in the product, and swipe on your face. It’s an easy way to experiment with texture and finish. It seemed to all start when Toronto-based user Stephanie Valentine, known to her followers as Glamzilla, shared the hack in an ad for Urban Decay’s All Night Long-Lasting Makeup Setting Spray on June 12. After that, a few other users put the method to the test to determine if it was worth the effort.

In the video, Valentine spritzes the spray onto Estee Lauder’s Bronze Goddess Powder Bronzer, then the MAC Cosmetics Powder Blush in Melba before blending each on her face. She shared with Allure that she likes using the technique whenever she wants to play with different textures or finishes or to revive products she hasn’t used in a while.

Spanish TikTok user Mari Steffany Siracusa also tried the technique and fell in love. She used MAC’s Prep and Prime Fix+ setting spray with Benefit Cosmetics’ Hoola Bronzer to give her face a nice glow. Like Valentine, she enjoyed the end result and told Allure that she would consider adding this to her everyday routine.

Unlike Valentine and Siracusa, Toronto-based TikTok user Alissia Christidis wasn’t impressed by the texture-altering technique. She tested it with a bronzer and blush, but found that the method didn’t work as well with the blush. “I don’t know,” she says in the video while examining the final result. “I don’t think I’d do this again.” She shared with Allure that because the product dried down fast, it was harder to blend out. So she was left with a patchy result.

While not everyone loves the technique, mixing powder products with setting sprays or other liquid mediums is not exactly new. New York-based makeup artist Joseph Carrillo tells Allure that the technique has been around for a long time and used with eye shadow especially. Despite that, he wouldn’t exactly recommend the approach. Instead, he suggests, “Spray the brush you are going to use, then pick up the product. Otherwise, your fave product can be drenched, molded, or ruined.”

Cosmetic chemist Ginger King also warns against this hack for hygiene reasons. “The first time is cool, but [once] the powder meets water, [it] equals a breeding ground for bacteria growth,” she says. An increase in bacteria can lead to breakouts, which is largely why dermatologists recommend treatments with antibacterial ingredients like salicylic acid and benzoyl peroxide. Instead, King says to scrape out the powder and mix it with your setting spray or another liquid medium on a separate palette, and then apply.

This TikTok hack may not be the greatest option, but as King and Carrillo both shared, there are other ways to manipulate a powder’s texture. So next time you’re low on cream bronzer, you can just grab your setting spray (mixing medium or distilled water works well too, according to Carrillo) and use one of their techniques.

Now enjoy the unboxing of the July Allure Beauty Box:

Never Give Up! Terrier Lost While on Vacation For 290 Days is Found Through Social Media