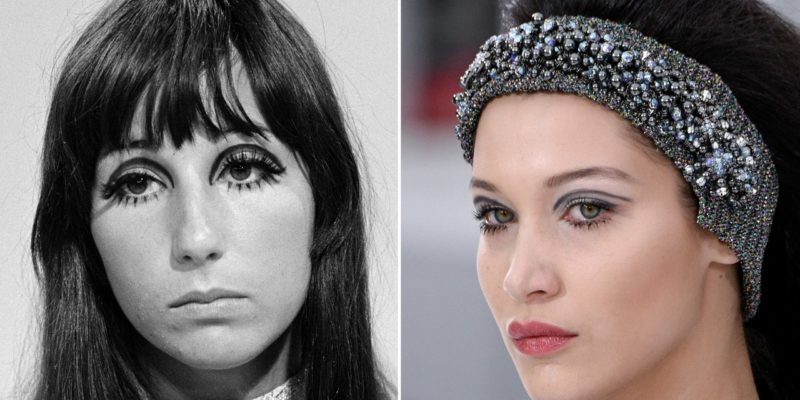 On the other hand, Tommy says to “look for a fair fan of lashes that are evenly spaced and the same density all the way across and longest in the center to outer corner.” A great example of that would be Ardell’s 3D Faux Mink Lash #853.

Also, we hate to tell you this… but you might make a mistake here or there. That’s totally OK; it’s exactly why Lavonne recommends having cotton swabs and Bioderma micellar water on hand just in case.

Start with a small eyeliner wing

Your first instinct might be to tackle that dark, dramatic cut crease first — but that’s the hardest part for most people, so Tommy recommends saving that for later. To ease yourself into this kind of makeup, it’s great to start with what you know: a pretty run-of-the-mill cat-eye, which you apply with your liquid eyeliner.

“Make a thin line of black liner directly in the groove of the lash line keeping it as thin as possible,” Lavonne advises. “Wing it out just a touch but draw it back inwards and stop at the inner corner of your eye.” Tommy recommends similar steps but notes that the outer tail of the wing “should be drawn down instead of up with the natural slope of the eye.”

Make a stencil to map out your “crease”

I put “crease” in quotations like that because you aren’t literally going to be putting eyeliner in your natural crease — you’ll apply it just above it, as all three makeup artists recommend, to create the illusion of bigger, deeper-set eyes.

The key to figuring out where you need to draw your line, Tommy explains, is to create a stencil while looking dead-on into a mirror. Grab your liquid liner and “put a dot near the end of the crease but just above it, then one in the center of the eye [above the crease], and another at the start [or inner part] of the crease,” he recommends. You can connect those dots using your gel or kohl eyeliner.

If you have monolids or hooded eyelids, you might want to take a page from Lavonne’s book while creating your crease stencil or drawing the line. “Hold a mirror at your chin and look down into it,” she explains. “By doing this you don’t blink and can see where your natural crease would be; you can draw the line above that so when you open your eyes you don’t lose the liner in the fold.”

Boy Hero Saves Sister From Choking After Watching John Cena, Who Congratulated Him With a Video

We found a few cool pieces from Yaacov Hassidim