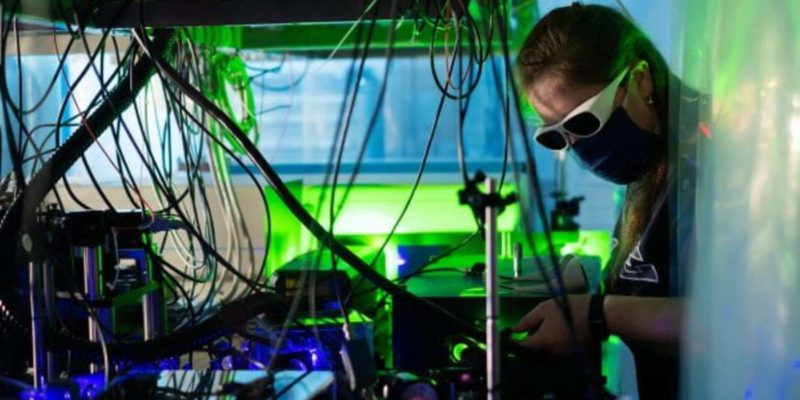 
Physicists have discovered a way to trap the world’s coldest plasma in a magnetic bottle, a technological achievement that could advance research on clean energy, space weather and astrophysics.

“To understand how the solar wind interacts with the Earth, or to generate clean energy from nuclear fusion, one has to understand how plasma, a soup of electrons and ions, behaves in a magnetic field,” Rice said, Dean of Natural Sciences Tom Killian. .

Using laser-cooled strontium, Killian and graduate students Grant Gorman and MacKenzie Warrens made a plasma about 1 degree above absolute zero, or about -272 degrees Celsius, and briefly trapped it with the forces of surrounding magnets.

It’s the first time ultracold plasma has been magnetically confined, and Killian, who has studied ultracold plasmas for more than two decades, said it opens the door to studying plasmas in many environments.

“This provides a clean and controllable test bed for studying neutral plasmas in much more complex places, such as the sun’s atmosphere or white dwarf stars,” said Killian, professor of physics and astronomy.

“It’s really helpful to have the plasma so cold and to have these very clean lab systems. Starting with a simple, small, well-controlled, and well-understood system allows you to eliminate some of the clutter and really isolate the phenomenon you want to see. “

That’s important to study co-author Stephen Bradshaw, a Rice astrophysicist who specializes in studying plasma phenomena in the sun.

“Throughout the sun’s atmosphere, the (strong) magnetic field has the effect of altering everything relative to what you would expect without a magnetic field, but in very subtle and complicated ways that can really trip you up if you don’t have a a good understanding of it, ”said Bradshaw, associate professor of physics and astronomy.

Solar physicists rarely get a clear observation of specific features in the sun’s atmosphere because part of the atmosphere is between the camera and those features, and unrelated phenomena in the middle atmosphere obscure what they would like to observe.

“Unfortunately, because of this line-of-sight problem, observational measurements of plasma properties are associated with a lot of uncertainty,” Bradshaw said. “But as we improve our understanding of the phenomena and fundamentally use laboratory results to test and calibrate our numerical models, hopefully we can reduce the uncertainty in these measurements.”

Plasma is one of the four fundamental states of matter, but unlike solids, liquids, and gases, plasmas are generally not a part of everyday life because they tend to occur in very hot places like the sun, lightning, or lightning. candle flame.

Like those hot plasmas, Killian plasmas are soups of electrons and ions, but they are cooled by laser cooling, a technique developed a quarter of a century ago to trap and slow matter with light.

Killian said that the quadrupole magnetic setup that was used to trap the plasma is a standard part of the ultracool setup that his lab and others use to make ultracold plasmas.

But figuring out how to trap plasma with magnets was a thorny problem because the magnetic field wreaks havoc on the optical system that physicists use to observe ultracold plasmas.

“Our diagnosis is laser-induced fluorescence, in which we project a laser beam onto the ions in our plasma, and if the beam’s frequency is correct, the ions will scatter the photons very effectively,” he said.

“You can take a picture of them and see where the ions are, and you can even measure their speed by looking at the Doppler shift, like using a radar gun to see how fast a car is moving. But the magnetic fields really do change around the resonant frequencies, and we have to unravel the changes in the spectrum that come from the magnetic field from the Doppler changes that we are interested in observing. “

That significantly complicates the experiments, and to further complicate matters, the magnetic fields change dramatically throughout the plasma.

“So we have to deal with not just a magnetic field, but a magnetic field that varies in space, in a reasonably complicated way, to understand the data and find out what is happening in the plasma,” Killian said. “We spent a year trying to figure out what we were looking at once we got the data.”

The behavior of plasma in experiments is also made more complex by the magnetic field. This is precisely why the capture technique could be so useful.

“There is a lot of complexity as our plasma expands through these field lines and begins to feel the forces and becomes trapped,” Killian said. “This is a very common phenomenon, but it is very complicated and something that we really need to understand.”

Another example is fusion energy research, where physicists and engineers hope to recreate the conditions inside the sun to create a large supply of clean energy.

Killian said that the quadrupole magnetic configuration that he, Gorman and Warrens used to bottle their ultracold plasmas is similar to the designs that fusion energy researchers developed in the 1960s.

Plasma for fusion needs to be around 150 million degrees Celsius, and holding it magnetically is challenging, Bradshaw said, in part because of unanswered questions about how plasma and magnetic fields interact and influence each other.

“One of the main problems is keeping the magnetic field stable enough for long enough to actually contain the reaction,” Bradshaw, who is the corresponding author of a published study on the work in Physical Review Letters, saying. “As soon as there is a small kind of disturbance in the magnetic field, it grows and ‘pfft’, the nuclear reaction is ruined.

RELATED: Incredible technology developed by private companies that are about to create nuclear fusion reactors to power humanity

“For it to work well, you have to keep things really, really stable,” he said. “And again, looking at things in a really nice, pristine laboratory plasma could help us better understand how the particles interact with the field.”

(CLOCK the video on this below).

DON’T BOTTLE This: SHARE this fascinating investigation with friends …