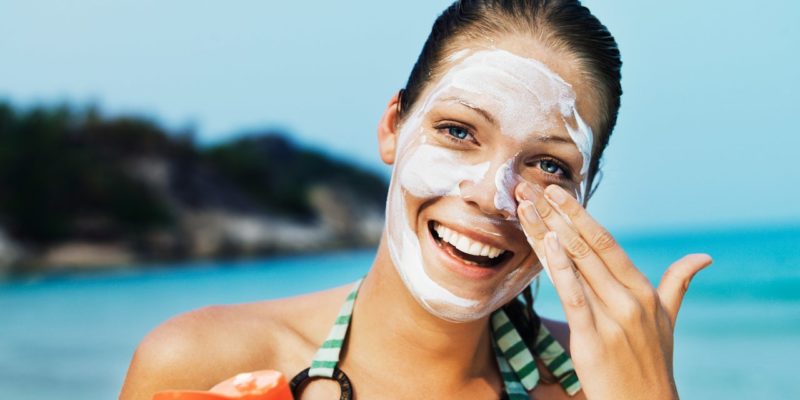 The next best thing, according to Del Campo, is clothing with a high thread count. “Clothing that has tight thread knitting protects best if it’s not UPF-enhanced clothing,” she says. “I always recommend a layer of sunscreen under clothing with high amounts of sun exposure, but I do not necessarily recommend reapplying under clothing as the sunscreen doesn’t break down as quickly without direct sunlight or excessive sweating.”

However, since certain body parts other than your face aren’t covered by clothing, Garshick says those particular areas definitely need sunscreen reapplication. “It is important to remember to reapply to the scalp, hands, neck, ears, lips, tops of feet, and areas that may be exposed that you may not realize,” she says.

And yes, reapplication is important indoors, too — especially if you spend any amount of time in a room with natural light. “If it is light enough for you to see, that is sun,” says Hirsch. “If you are indoors all day and not near any direct sunlight, reapplying just doesn’t have the same urgency. But if you sit, as many people do, at a desk facing a window with sunlight pouring in, you should really think about that, because UVA goes through glass.”

And remember, you’re not just protecting yourself against UVA rays when you’re indoors. “While the majority of blue light exposure is from the sun, our digital devices emit high energy visible light, and some sunscreens may offer protection against this,” Garshick says.

The best way to ensure you’re applying enough sunscreen every day is to simply force yourself into the habit, like you have with your moisturizer. “Applying an SPF moisturizer daily makes it a habit that pays off in the long run. If you only do it occasionally, then it’s not going to be consistent,” says Shirazi, who personally loves using tinted moisturizer to serve multiple purposes. But nowadays, sunscreen doesn’t even have be called a moisturizer in order to serve as one, she says, because daily sunscreen formulas have become more moisturizing, so there’s no need to apply a moisturizer beforehand.

If you’re reluctant to really slather on a lot of sunscreen, at the very least, choose a sunscreen with a higher SPF number. “The increased level of protection compensates, to an extent, for under-application,” says Hirsch. However, “this does not negate the need to reapply after two hours for sweating or swimming or being outdoors, which is one issue with the super high SPFs — people tend to think they are ‘one and done’ for application, which is not correct.”

15 Good Morning Texts to Send Someone You Love

How to Write Love | DailyGood