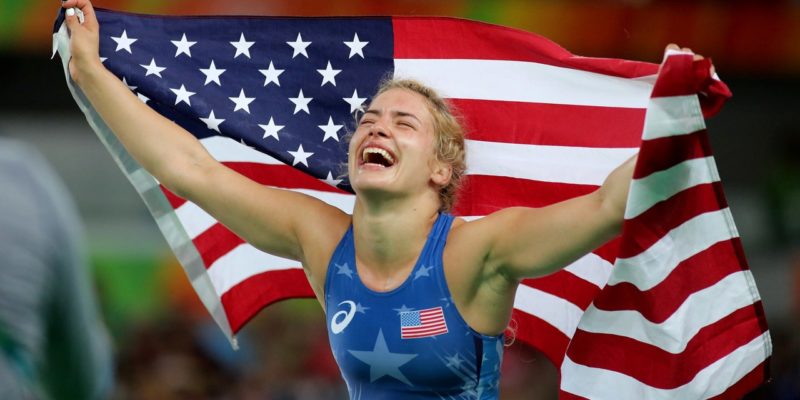 Sometimes, like in the case of Olympic boxing, a specific fighting hairstyle is required due to certain rules and regulations. “The rules state that boxers cannot have an inch of hair showing out of our headgear during competition, so making sure my hair is kept up is required during a fight,” says Ginny Fuchs, the captain of the United States Olympic boxing team. Even so, keeping her brain on fights instead of hair is a top priority for her, too. “The sensation of feeling my hair coming out automatically shifts my focus to my hair — my hair also has fallen in my eyesight, affecting my vision in the ring,” Fuchs recalls. “Knowing my hair is up safely helps give me full confidence in the ring.” A pair of French or Dutch braids are what she finds to be the most effective style as well.

Hairstyling is equally important for those in grappling sports (ones that require gripping and submitting your opponents such as jiu-jitsu, judo, or wrestling). “A lot of times, girls, instead of grabbing your head and pulling it down, they’ll grab onto your hair,” explains two-time world wrestling champion and Olympic gold medalist Helen Maroulis. “Even though this is illegal, it does happen a lot.” Sometimes, a wrestler’s hair can even get stuck between their body and their competitor’s or between their body and the mat, in which case they get stuck and can’t execute certain moves. That’s the worst-case scenario as far as wrestling hair goes, Maroulis adds. That’s why her competition style of choice is “a bunch of intricate braids.”

“Even pulling your hair behind your ears for one second could be the moment a strike lands and knocks you out.”

Hairstyles represent something deeper beyond practicality to many fighters, too. As boxer and fitness trainer Holly Lawson points out, those braids can denote luck, strength, and more. “A lot of fighters are superstitious, so a lot of us have a certain way we wear our hair when we have it done for the fight,” she explains. “I always feel like I am ready for battle once my hair has been braided, and I enjoy the banter that I have while I am getting it done.” Maroulis feels similarly. “I always joke that once the braid comes in, I’m a different person. I’m just like, ‘All right, here we go. It’s fight mode. Don’t talk to me. I’m just ready to go do this.'”

Depending on how far away a fight or match takes place from a fighters’ home, they could be wearing their braids overnight if they don’t braid it themselves (and plenty of fighters don’t). “I have a woman who braids my hair for each fight,” Lawson says. “I either have it braided the day of the fight before I head to the venue or before I leave for the weigh-ins.”

15 Positive Statements to Help You Avoid Confrontations with Toxic People