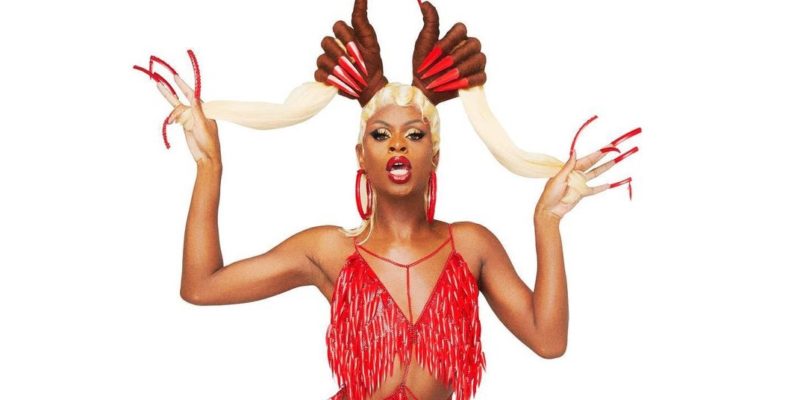 The entire world has changed since RuPaul’s Drag Race‘s 13th season premiered all the way back on New Year’s Day, but after Friday’s finale, Drag Race fans everywhere have a new reigning queen: Symone, the hilarious, witty, talented, and deeply original individual from Los Angeles by way of Conway, Arkansas.

Symone delivered all season long — on the runways, in (most) of the challenges, in lip-syncs — and she single-handedly changed the way most of us say the word “factory.” (It’s fec’try now.) Symone didn’t come to season 13 to play; she came to slay, and she did so while remaining Black as hell. Symone’s approach to drag has always been a celebration of Black culture and her entire Drag Race package was truly a love letter to it. From her mile-long durag look, the white “Say Their Names” runway, to her finale look with her towering braids, Symone has not failed to share the love of her culture and its aesthetics with the world.

Friday’s finale began with a ball: The four finalists were to showcase three different looks. Naturally, Symone knocked all three out of the park, but the one that really got our beauty brains buzzing was her “Red All Over” look. For the category, she wore a slinky little red dress covered in fringe — which was actually just a ton of spray-painted acrylic nails. The details, from the matching nail earrings to the extra-long toenails hanging off her platforms were an absolute delight, but the hair, darling. That was nothing short of epic. Her blonde wig boasted a pair of high ponytails, but instead of traditional scrunchies, it looks like hands are holding the ponies in place.

This takes “if you’re not wearing nails, you’re not doing drag” to entirely new heights. It is so quintessential Symone — beautiful, cheeky, highly stylized, and conceptual. But of course, a look that brilliant isn’t created in a vacuum, and Symone is a proud card-carrying member of the House of Avalon, her collaborative drag family that helps her turn her ideas into magic. Symone’s drag sister, Drag Race season 12 finalist Gigi Goode, and House of Avalon member and creative director Marko Monroe worked alongside the winning queen to take this look from imagination to reality. We chatted with the two to discuss the look’s concept, development, and inspiration.

“All of Symone’s looks are meant to tell a story — for example, her black and white, red, and eleganza [finale looks] represent the past, present, and future through Symone’s eyes,” explains Goode.

The goal for the finale was to continue the narrative she began telling through the entire season, but with a perfect little bow to wrap it all up. The nail look, which Goode calls “quintessentially Symone” represents the present. The look is meant to embody Symone as a character, the boughetto Debor-ah — the kind of girl who gets her nails done weekly and might just have enough popped off acrylics in her apartment to make a dress. For the House of Avalon, this kind of niche-but-vivid reference in an outfit, the little details that tell a story (or allow you to come up with one) is called a “wink.”