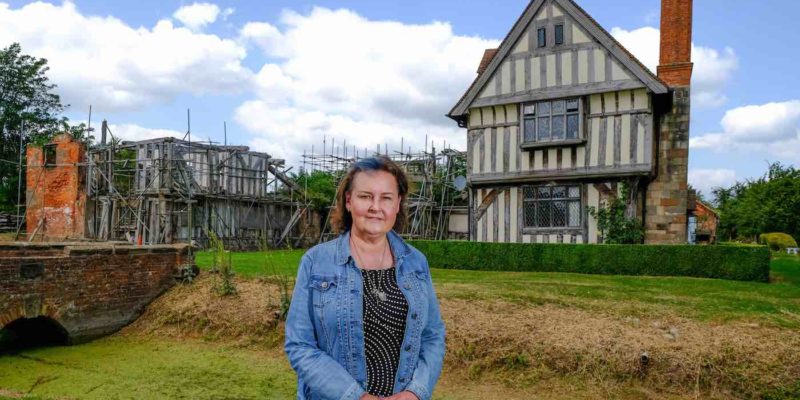 
A real life Indiana Jones believes he may have found the secret location of the Holy Grail and the Ark of the Covenant, under a house in Staffordshire.

Historian and anthropologist David Adkins is convinced that the priceless treasures, which were removed from Jerusalem in 1307, were hidden underneath the Sinai Park House in Burton-on-Trent.

He claims to have discovered links between the property and the Knights Templar who hid the mythical Ark and the Grail centuries ago.

David now hopes to search the labyrinth of tunnels below the 14th century house to prove that the Holy Grail was hidden there.

“I’ve been researching it for 34 years, so I really have a complete history of the place and looked for files that no one had touched before,” said the 50-year-old.

“There are so many councils that when the Knights Templar left La Rochelle in 1307 we know they had a treasure. There are theories about Oak Island in Nova Scotia and Roslyn Chapel in Scotland, but it has never been found. “

“Sinai House is the most obvious place once you enter the mind of a medieval Templar,” he says. “The name Sinai really screams at you from the pages of history because you don’t have another old house with that name.”

The two key points for Adkins are the labyrinth of tunnels and natural caves and the moment when the monks of Burton Abbey took possession of that house, at the same time that the Templars were trying to hide that horde.

“A geologist once told me that there were caverns as big as Westminster Abbey underneath the house,” he said. the express.

In 1880, an excavation was carried out in the tunnels of the Sinai House and the archaeologists reached a kilometer underground before being “forced back by the fumes.” The stone arch of the basement has remained bricked up ever since.

“We know there is very strong evidence that they brought manuscripts and gold from Solomon’s Temple in 1307. I think they adapted the tunnels to hide everything they brought from Jerusalem.”

David said the family who lived at Sinai House at the time left in the early 1300s, and Burton Abbey took over the property, which was hidden by Needham Forest on top of a hill that empties into the valley. of Trent.

Kate Murphy, the current owner, has now given David permission to search the vast caverns below her home in an attempt to solve the mystery. The researcher, who previously made headlines when he located a 10,000-year-old skull known as ‘Greta’, wants to start his search with a geophysical scan.

Murphy, 56, bought the house in 1994 for £ 50,000. It is designated nationally as a Grade II Historic Building, which means it is of “special interest that justifies all efforts to preserve it.”

LOOK: The first time a 10-year-old uses his birthday metal detector, he discovers a century-old sword

“It is a very important site and I saw it for the first time with my late husband David in 1990 because we liked half-timbered houses.

“I’m totally clinging to the idea that there is something there,” she told SWNS. “I think the theory is very good, it is well researched and I am very impressed with David’s work.”

“I am very excited about it and it is not cynicism about the story that I think it is unlikely that something will be found, that is due to the inaccessibility of the tunnels.

“There is much more evidence in the house, like the wall paintings in the tabernacle, that something is going on.

SHARE the interesting news with your friends on social networks …