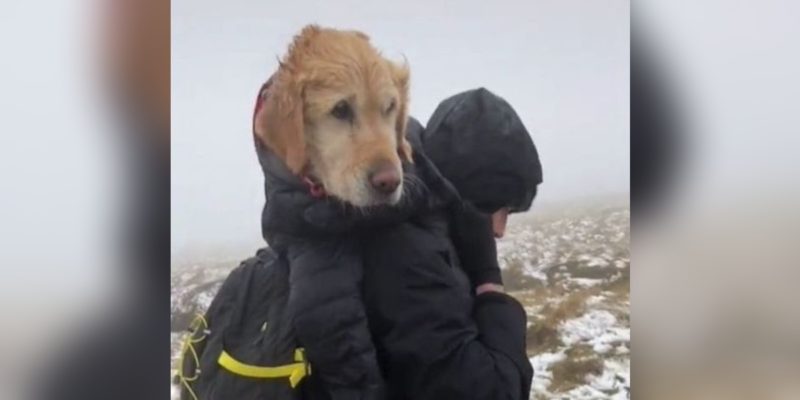 
There is almost no worse agony for pet owners than when a beloved fur baby disappears. While this story could have had a more tragic ending, fate was certainly looking for a dog that disappeared in Ireland’s Wicklow Mountains last January.

Neesha, an 8-year-old golden retriever, is one lucky dog. After spending two weeks alone without food or real shelter, the brave dog was discovered by chance by a couple who, despite the winter weather, were walking through the mountain range and ran into her.

Two weeks earlier, Neesha’s owners had brought her and their other dog, a German Shepherd named Harley, for a workout outside. Startled by a deer, both dogs left. Harley found her way back to the parking lot the next day, but Neesha didn’t.

The family did an exhaustive search. They left a laundry basket of dirty clothes near the spot where they had last seen Neesha just in case she was on the familiar scent marker.

They even turned to drones and went online for help finding Neesha, but there was still no sign of her.

“We went to social media and posted it. Then a weekend later, we were still looking for her, we were starting to lose hope, ”said the pet’s mom Erina O’Shea Goetelen. The Irish Times.

Eventually, the family began to accept that Neesha might not be returning home. “We thought he was 8 years old, it’s been two weeks, there was no way he could survive that.”

Drs Ciara Nolan and Jean Francois Bonnet must be true dedicated hikers having braved the elements on the frigid day the couple decided to climb to the top of one of Wicklow’s peaks. As they neared the top, Nolan was surprised to see a dog shivering in the snow huddled next to some rocks.

“I was petrified, frozen. He didn’t have enough energy to bark or stand, “Bonnet said in an interview with Eastcoast FM. “We tried to get him to walk, he couldn’t stand. So we covered her with our spare clothes, gave her some food. “

Nolan lifted Neesha onto Bonnet’s back for the 6.2-mile (10-km) hike back up the mountain. After the dog and the man fell several times into the icy conditions, Nolan devised a way to tie Neesha to his companion’s backpack with his scarf.

As soon as they reached ground level, Nolan and Bonnet led the dog to Ash Animal Rescue. She had lost a lot of weight and was dehydrated, but aside from a few cuts and scrapes, the hardy pup was surprisingly in good condition.

CHECK OUT: Watch as fishermen risk walking on a frozen lake to rescue a baby deer

“When Ciara called us on Saturday night, I was very excited when I realized they had found Neesha,” said the Ash Animal Rescue administrator. posted on Facebook. “When I saw the video clip I couldn’t help but get emotional. The weather had affected us all kinds in the last 2 weeks, that Neesha survived everything is a miracle. “

PLUS: A man saves the moose after it was buried in an avalanche, with only one nostril and one eye poking through the snow

Neesha’s owners could hardly believe it when they learned that their dog had been found alive.

“We were so, so relieved and happy,” said O’Shea Goetelen. Irish Central. “We have no words to thank you both for what you did to bring her home. They are absolutely amazing and incredible. We can’t thank you enough. “

RELATED: You thought it was a kitten lost in the snow, but it was one of the most threatened mammals in Europe

They say all dogs go to heaven, but due to a twist of fate and two determined rescuers, that’s a journey Neesha won’t be on for quite some time. The luck of the Irish, it seems, extends to their canine companions, and luckily for Neesha, someone was listening.

SHARE the story of this incredible rescue with your friends …