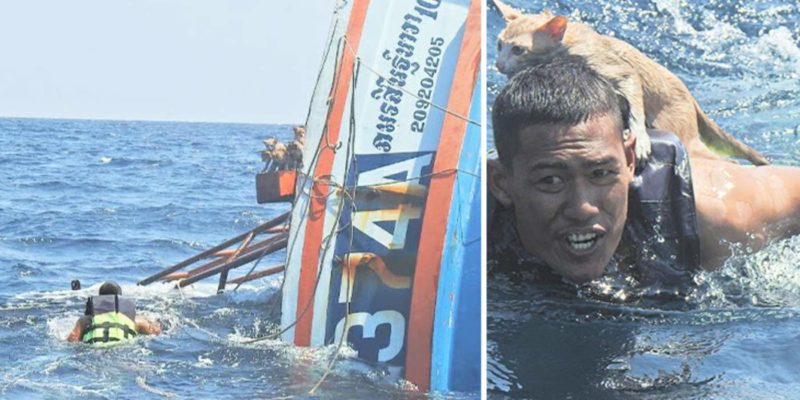 
A brave navy sailor recently plunged into rough waters to rescue four kittens from a burning ship off the coast of Thailand.

Thatsaphon Saii, 23, received the emergency call and dove into the water, still putting on his pants, to swim towards the wreck.

All eight crew members had already escaped hell and were picked up by a passing fishing boat.

However, four terrified kittens were left behind. They moved to the bow and clung to the structure of a crane as the flames rapidly engulfed the ship.

The heroic Thatsaphon swam 50 feet through rough seas before climbing aboard the sinking ship and putting three cats in an old sack of rice.

The other kitten carried one on his shoulder.

The sailor emerged with the trembling moggies and rowed with them in his arms back to the navy ship. The kittens were dehydrated and given fresh water while they recovered on board.

The ship, an old wooden fishing boat, was allowed to burn and sink into the depths near the island of Koh Adang.

PLUS: Hikers brave miles of icy mountain trails after rescuing a stranded dog for 2 weeks

Thatsaphon, part of Operation Unit 491 of the Royal Thai Navy Air and Coastal Defense Command, said: “When we arrived it was to secure the wreckage and check for oil spills. But we did notice the cats on board.

“I immediately took off my shirt and put on a life jacket so I could jump into the sea. The flames were at the back of the ship, but it was starting to sink, so I knew I had to be fast.

“I am so relieved that I was able to save the kittens. They would have drowned or died of thirst if they had gone to the sea ”.

RELATED: Cat was thought to be a goner in the California mudslides. 3 years later, the ‘miracle cat’ reappeared

The four kittens are now fully recovered from their adventure on the high seas, and the naval officers are currently taking care of the little cats in their office.

SHARE this daring rescue story with your friends on social media….