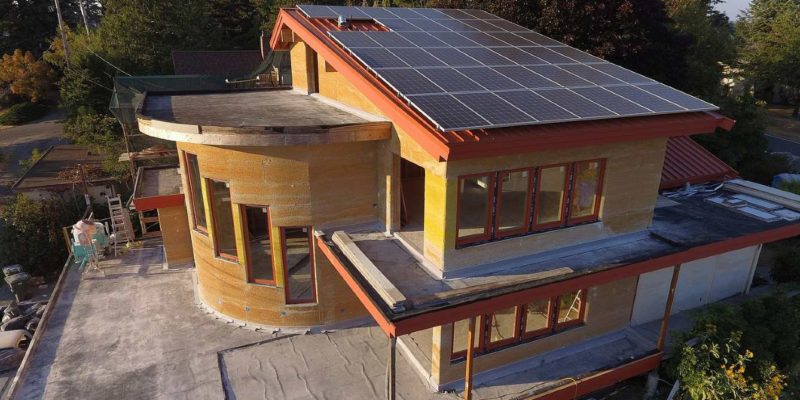 
This article was written by Nate Berg for Ensia and has been reprinted with permission.

It has become almost a cliché to discuss the benefits of hemp, the supposed wonder plant with almost infinite uses—From woven fibers to edible seeds and bioplastics.

“Of course, hemp is that magic crop that does it all,” says Nicholas Carter, an environmental researcher who, along with Tushar Mehta, a Toronto-based physician, runs the website. Plant-based data.

Your job is to read scientific articles and studies and summarize the most important work that supports plants as a food source and other important uses. Given the hype, Carter wondered how much power hemp really had. “I wanted to see the research on that, to see what is really real, what is really supported by evidence,” he says.

Magic? Not quite. But Carter came out of his attempt to discredit a hemp believer. And he found that one of the most promising uses is its application as a building material known as hempcrete.

Like the concrete of the same name, hemp is a material mixed with a binder that hardens it into a solid in the form of blocks and panels. Made from the dry woody core of hemp stalks and a lime-based binder, hemp can be cast like concrete.

But unlike concrete and its binder cement, which accounts for roughly 8% of man-made carbon annually, hempcrete sequesters CO2. According to a recent study, hempcrete can capture 307 kilograms of CO2 per cubic meter (19 pounds per cubic foot), roughly equivalent to the annual carbon emissions of three coolers.

“As we grow it and make hempcrete, it’s absorbing CO2 all the time and encapsulating the CO2 in the framework,” says Eric McKee, founder of Hemp Building Association of the USA.

PLUS: The new green building revolution uses wood to build ‘scrapers’ that save tons of CO2

SR Karade, Senior Principal Scientist of the Central Building Research Institute in Roorkee, India, outside of New Delhi, he has been studying hemp and wrote in a recent article for the Journal of Cleaner Production on how hemp behaves as a building material in terms of insulation, durability, structural resistance and acoustic control, among other criteria. Overall, Karade found, hempcrete meets today’s standards for most construction applications and, in many cases, outperforms materials used today, particularly for insulation.

Hempcrete is not a direct replacement for concrete, warns Karade. In the laboratory, he has been able to manufacture hempcrete with a compressive strength of 3 megapascals (MPa). “Typical concrete blocks, which are used to make walls, have compressive strength values ​​ranging from 5 MPa to 20 MPa,” he wrote in an email. “Due to its low mechanical strength, it cannot be trusted enough to support structural loads. However, considering its impressive functional properties, in terms of thermal resistance and [moisture-absorbing] behavior, hemp concrete may be at the top of the wall BOM in the future. “

In other words, it cannot supply the supporting structure of a building, but it can insulate and cover its walls.

That’s part of what makes hemp a potentially transformative building material, says Steve Allin, director of the International Hemp Building Association. Not only can hemp sequester carbon, but its use can help reduce the production of more CO2. “The really important thing about this material is that we can create new structures or we can update or modernize existing structures so that they do not need air conditioning,” says Allin.

As Karade points out, hemp has a high thermal capacity compared to concrete, which makes it good for both the structure of a wall and its insulation.

Hempcrete can also reduce another big problem: construction waste. Concrete represents more than a half of the rubble generated by the construction and demolition of buildings. The US Environmental Protection Agency estimates that more than 23 million tons (over 20 million metric tons) of concrete rubble was created during construction in 2015. And while hemp cannot be used for structural sections of a building, it can be used to replace non-structural wall elements that traditionally could use concrete . Hempcrete can also be used in place of common building materials such as drywall and plaster, which account for approximately 8% of building construction rubble.

Allin says that builders are beginning to see value in hemp. The buildings have been built or renovated with hemp in France, the United Kingdom, Belgium, Ireland, the Netherlands, Italy, Y Australia. He says the British Museum Science GroupThe artifact storage facility used hemp, as did public housing towers and even renovations to hundreds of years old stone buildings.

RELATED: Stanford designer is making bricks with fast-growing fungi that are stronger than concrete

The challenge, he says, is availability. There are only about a dozen hemp processing plants that can process hemp into a form usable in creating hempcrete, and most are in Europe, according to Allin. “That’s really the jam,” he says. “What we really need is investment in primary processing. And that investment needs to be longer-term, rather than people expecting quick returns and thinking of it as just another standard quick investment. “

Karade notes that the other big challenge is the legality of growing hemp, which can be difficult to distinguish from marijuana plants. “Commercial extraction of hemp concrete is still limited by regulatory restrictions on hemp cultivation,” says Karade.

But the laws begin to change. In the US, the 2018 Farm Bill allows extensive cultivation of “industrial hemp,” but with strict restrictions on the licenses of the producers and the psychoactive content of the crop, tetrahydrocannabinol or THC.

CHECK OUT: Rather than ending up in a landfill, non-recyclable glass could soon become a new, cheaper ingredient in concrete

Allin hopes this will lead to more farmers growing hemp crops and entrepreneurs seeing an opportunity to build the processing plants necessary to convert that hemp into construction products. He says that the builders are willing to use hemp in their projects, but the products must be available, which depends on the processing, which is up to the farmers. “Once those things are in place, everything will be profitable,” says Allin. “In a way, we are talking about starting an industry from scratch.”

What went right this week: ‘peak meat’ by 2025, plus more positive news