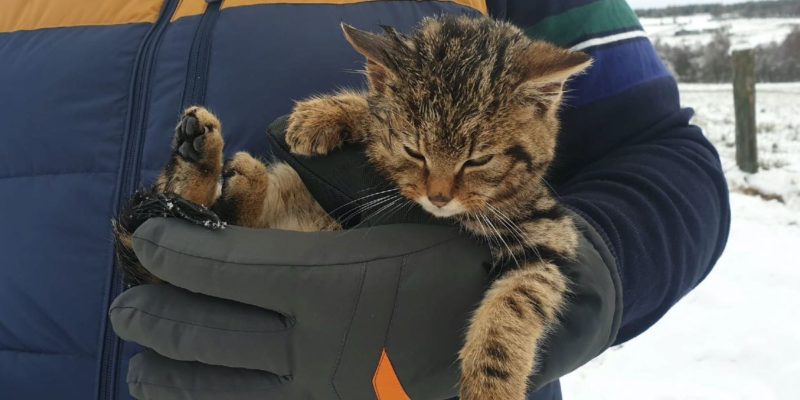 
A man who found a tiny kitten buried in the snow thought it was a stray cat, only to discover that it was one of the most threatened mammals in Europe.

Chef Pete MacNab, 32, took a walk in Scotland’s Cairngorms National Park with his young son and a friend.

They saw a group of sheep circling around something. As they got closer, the animals scattered, revealing a small tabby kitten lying in the snow in rural Dava Way.

The cat couldn’t get up. It looked frosty and its fur was all matted with snow. Not wanting to leave the creature in distress, Pete’s friend, Piotr, drove it three miles back to town. He noted that its claws were like “miniature razors”, and the couple joked that the little creature must be a Scottish wildcat – a rare species known to live in the Highlands.

After being dropped off at the vets on Wednesday, Pete began posting to local Facebook groups, but no owners showed up.

RELATED: Cat was thought to be a goner in the California landslides. 3 years later, the ‘miracle cat’ reappeared

Piotr and his partner began planning to get a cat bed and bring the kitten home, whom they named Huntleigh.

Then the next day the vet confirmed that a specialist had identified the little tabby as a Scottish wildcat.

Only about 100 to 300 of the species remain. The only wild member of the cat family in the UK, it is also one of the most threatened mammals in Europe.

CHECK OUT: This dog was lost in the woods for 10 days with a winter storm on the way, but a drone saved the day

Sadly, despite attempts to revive the cat with glucose, hot water, and a warm blanket, the cat did not survive Thursday night.

Because of their bond with the kitten, Peter and Piotr have started a fundraiser to raise money for a charity helping other wildcats, which has raised over £ 5,000 ($ 6,800) so far.

Peter has now been contacted by the Royal Zoological Society, which is part of the breeding program, to tell him that the campaign has also boosted his fundraising.

If you’d like to donate to GoFundMe, these friends have started on behalf of Huntleigh, just go to this link.

SHARE this crazy Scottish news with your friends on social media …

What went right this week: US climate action, plus more positive news